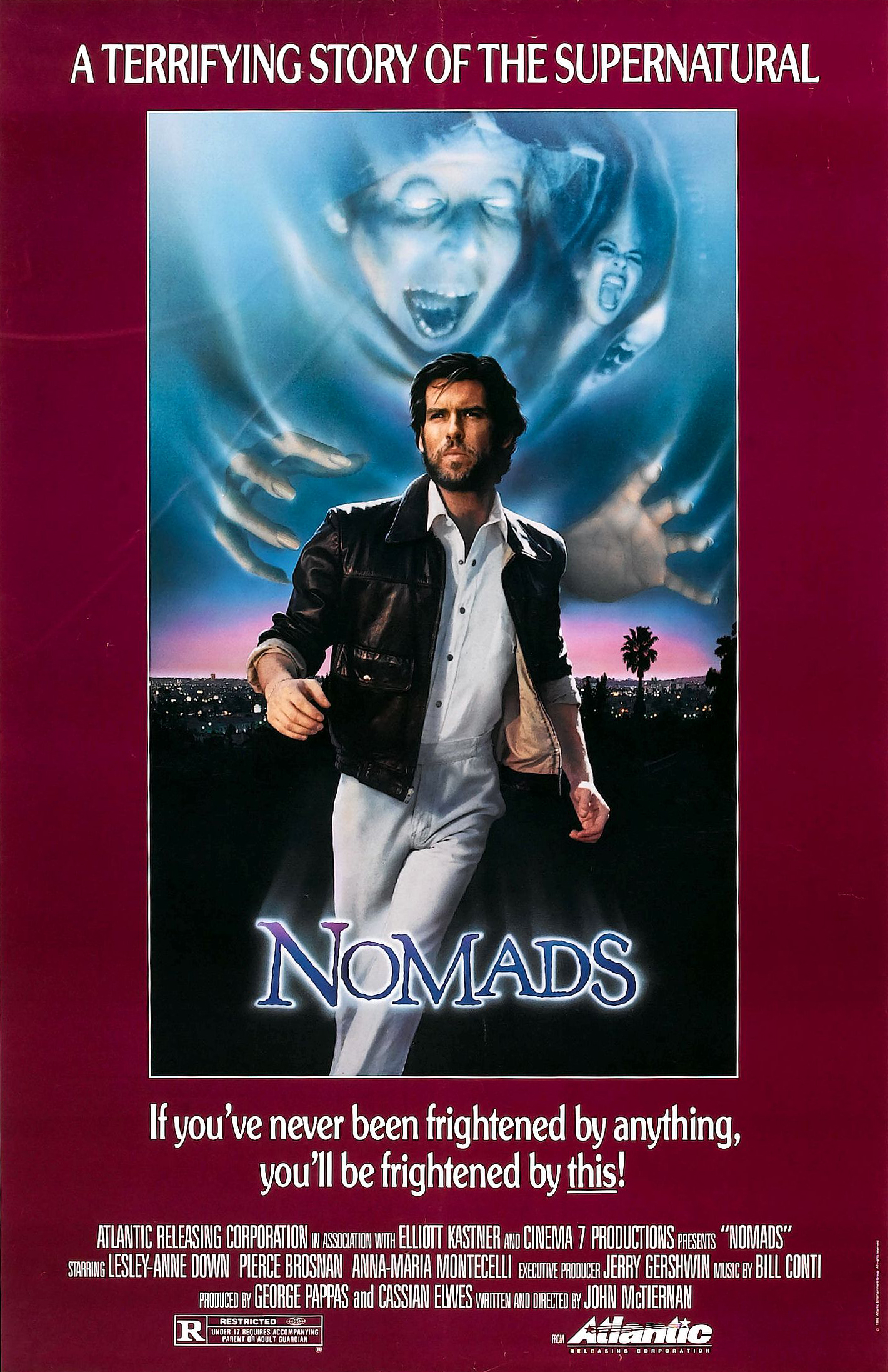 #8 in my Ranking of John McTiernan films.

First films are tricky. You very rarely get the sort of unrivaled success of Orson Welles. Instead, you mostly get works that show promise in some ways and extreme deficiencies in others. John McTiernan’s first film, Nomads, has its charms but they are outweighed by some rather large problems that a more experienced storyteller might have avoided. And yet, I can easily see why Arnold Schwarzenegger would have watched it and decided that McTiernan was a quality pick to direct a film about Arnold chasing an invisible alien through South American jungles. Nomads had the right kind of atmosphere to suggest just that.

A question went through my mind early in this film: Why a doctor? The story is of a doctor who encounters a raving French man just before he dies in her care at the hospital. Some sort of magical transference happens and she ends up living his final few days of memories to his death, and as the situation was first developing, I was asking that aforementioned question: Why a doctor? Why not a businessman, fast food worker, fellow anthropologist, or literally anyone else? Why a doctor? And I don’t think the movie has a good explanation for that. There are a couple of lines of dialogue to perhaps suggest that she should be extra rational as a doctor and resistant to the ideas within the visions (which I’ll get to), but she’s pretty much a complete mess from the second vision on, completely falling into the visions with little ability to discern the visions from her current reality.

The thing is that the perfect character to have gone through this was the French anthropologist’s wife, though she would need a slight rewrite. Jean Charles Pommier had been in the field, studying different nomadic cultures, for years with Veronique, his wife, by his side the whole time. In the film as it is, she’s as knowledgeable of the nomads as Jean Charles while Dr. Eileen Flax ends up running to Veronique for explanations late in the film. The problem is that Dr. Flax has no emotional connection to Jean Charles, so the visions end up feeling a bit more like bad dreams than true nightmares. Transferring those visions to Veronique while denying her some of the knowledge of the nomads (which she has in the film but not in the alternate version in my head) by having her have stayed behind on at least one of his excursions (perhaps his first) will make the terror of watching her husband’s final days from another perspective than her own (allowing for new scenes where she understands certain things she experienced first had better because of the visions) would have created a more immediate emotional connection for the audience to latch onto. Dr. Flax is too distant from everything about Jean Charles for the visions to have a similar effect.

Another problem I have with the film is the eponymous nomads themselves. They’re tied to some Inuit legends about evil spirits, and I like the idea of them. However the execution leaves something to be desired. I never considered them remotely scary. They’re faux-tough guys and gals in leather who gyrate a lot and pose as toughs. I never felt like the characters’ sense of terror was justified at the sight of them. They looked sillier than scary, and I think it undermined a lot of the really good atmosphere of the film. I had another problem with the nomads, but the final moments of the film fixed it for me. It was really had to discern what these things wanted, what their motivations were. I can deal with evil spirit characters with no motivation beyond chaotic destruction (think Borgman), but it didn’t really work here, until the final moment revealed the results of their terror.

Atmosphere, though, is where the film is at its best. Atmosphere is a thin reed on which to hang a film, which is one reason the movie as a whole doesn’t work, but it’s hard to deny that it’s there. The film is moodily shot in and around Los Angeles with deep shadows creating implied terror that works far better than the more overt terror elements of the nomads. There’s a great sequence late in the film where Jean Charles shows up at an abandoned building and meets a blind nun in the middle of the night. The nun’s blindness is never made explicit, so it needs to be figured out over time, creating a sense of unease that carries the scene really well.

As a first film, it shows promise. It needed a serious rewrite to figure out the vision elements and a redesign of the nomads to give them an actual sense of visual menace. I think Arnold showed real foresight when he saw this and got McTiernan to direct Predator.