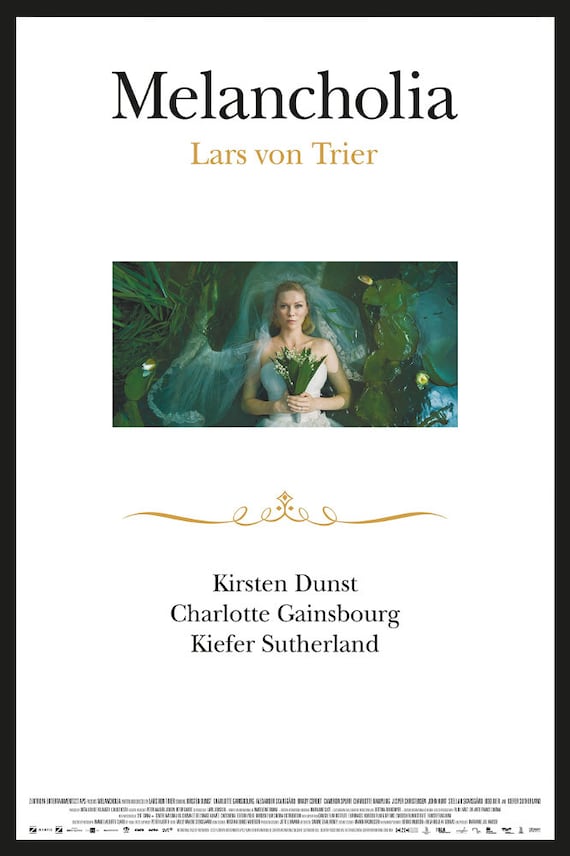 A couple of years ago I swore off Lars Von Trier movies after watching Antichrist. I remember watching it, convinced that I would at least like the film after the first half hour, certain that nothing the movie could do would undermine the very high quality beginning of the film, and ended up absolutely loathing the film with every fiber of my being. The early portraits of the two characters had given way to complete and ugly nonsense. Still, after time had healed some of these wounds, I decided to give Melancholia a try, and I see a similar pattern, though it’s far, far less aggressive on its second half.

Lars Von Trier has said that he wrote both this and Antichrist while messed up on drugs and suffering from depression, and it shows. The first half of Melancholia is dedicated to the first of two sisters, Justine, and her wedding day. The problem is that Justine is suffering from depression, and she cannot manage to be happy no matter the lavish celebration her brother in law is throwing for her at his golf course, every effort of her sister, Claire, and new husband to make her happy, her father being a cad, and her mother crapping all over the institution of marriage at her daughter’s wedding celebration. It seems to be implied that it’s her mother’s speech against marriage at the dinner that sets Justine off back down the path of depression. She’s seen as nothing but happy up to that point, but the speech was really just a trigger that anything else that night could have set off.

This portrait of spiraling depression is completely compelling. Justine teeters between happy, functional, and completely unreachable throughout the long night, finding small ways to move from one state to another until she ultimately destroys everything by grabbing the meek little nobody who her employer has sent to try and get a tagline out of her and having sex with him on the golf course, and then she publicly quits her job, and the marriage of less than a day ends completely. I love the first half of this film.

The second half is less interesting. It’s titled after Claire and follows her as the titular planet, Melancholia, comes hurtling towards Earth. This second half feels like a justification and celebration of both depression and nihilism, and I don’t find it terribly compelling. Justine has become a sort of magic creature who can see things (like the number of beans in a jar from her wedding some time before) which is supposed to give her authority over the events transpiring. So, when she says that Melancholia is going to hit the Earth despite what her brother in law says of what the scientific community has determined, then it’s true. When she says that life is only on Earth and Melancholia is going to end all life in the universe, we’re supposed to believe her. It’s a weird change that doesn’t feel right dramatically or in terms of her character. The only reason it’s there is to give Von Trier an authoritative voice in his own film to justify depression and nihilism.

The rational character of John, Justine’s brother in law and Claire’s husband, is giving constant assurances that everything will be okay, finally breathing a huge sigh of relief when Melancholia starts to move away from Earth initially, talking about the margin of error in all science. However, once the planet starts to move back, he immediately succumbs to fear and takes a bunch of pills to kill himself without telling anyone, leaving Claire and their child alone in the large house with Justine. Justine calmly observes the deteriorating condition, alternatively chastising Claire for trying to find solace in the desperate time and giving solace to both Claire and the boy as the planet gets closer.

The movie is far more compelling when it’s documenting depression in its first half than almost celebrating it in its second. Kirsten Dunst is fantastic in the first half, and much more muted in the second. I love the opening overture of impressionistic sights played to music by Wagner. I wouldn’t say that the movie falls apart in its second half, I just don’t think it’s nearly as interesting for the second hour. The first half is absolutely fantastic, though.