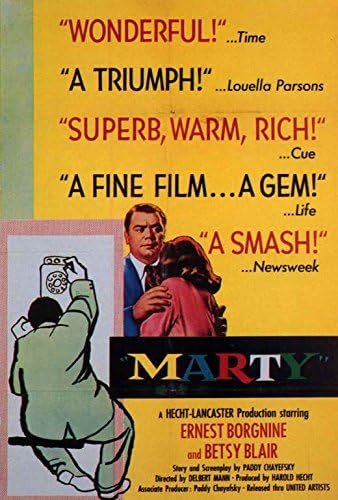 This movie is so small. It’s about two people and the handful who surround them in the 36 hours that mark the beginnings of their relationship. It’s also the first American independent film that convinced American distributors that there was a similar market in the US for independent films as there was in Europe for European independent films. It’s part of the same school of film that had previously produced On the Waterfront (which had actual studio backing) that focused on regular people using real locations in New York.

The movie is about Marty, the son of an Italian immigrant family, and the last of several siblings left single. At 34, he’s tired of getting hurt by women and has entered the first stages of completely shutting himself off from the opposite sex and just working his job at the butcher’s shop and living with his mother for the rest of his life. His buddy, Angie, is similar if a year younger, and still eager to find a girl. Marty’s a nice guy, so he follows the insistence of his friend and mother to go out one more time to the Stardust Ballroom to find a girl.

Marty meets a girl, a rather plain twenty nine year old named Clara, also at the tail end of her rope when it comes to finding a partner of the opposite sex. Left behind by the rest of the world, the two instantly make a connection, and the movie takes its time to sell that connection. We follow them through the course of the night as Marty talks about his history in the war and Clara talks about her experiences teaching chemistry at her elementary school, and the halting romance that develops is very sweet. We can feel their earnestness and barely hidden years of pain. We can see the thinly veiled joy they both feel at finding someone they can actually talk to and wants to talk back.

Of course, things then go wrong. There’s a subplot in the film about Marty’s aunt who’s getting kicked out of her son’s house because she clashes horribly with his young wife. The aunt goes to live with Marty and his mother, warning Marty’s mother about being a widow with children who’ve gone off to lead their own lives, leaving her with nothing to live for anymore. Suddenly, her enthusiasm for Marty to find a wife wanes, especially when she briefly meets Clara who expresses the opinion that sons should detach from their mothers when they marry. Angie, at the same time, is peeved that Marty left the ballroom without him and is jealous of the attentions that Marty is showering on Clara. They’re buddies and one shouldn’t be leaving the other behind in the girl department. Both Marty’s mother and Angie end up sabotaging Marty’s relationship for their own selfish ends. Marty, being the perennial nice guy, falls to their demands before he bucks up, takes control of his own life, and calls Clara back.

Now, my only real problem with the film is how it leaves Clara. The last time we see her, she’s sitting on her couch in her house with her parents watching television as she fails to hold back tears because Marty never called her when he said he would. The last shot of the movie is of Marty picking up the phone and calling her, but we never see Clara again. I really feel like she deserved a final shot picking up the phone and hearing Marty’s voice.

Anyway, the movie is shockingly well made, but the talent is subtle. I want to focus on two early shots. The first is of Marty calling a girl he had met a month before asking for a date. It’s a medium shot as he awkwardly tries to reintroduce himself to her, but it pushes in just as he closes his eyes and knows that she’s not interested in meeting him, holding back the pain of one more rejection in a long line of rejections. Close ups are best used when heightening emotional moments, and that push into the close up as Marty gets hit is perfect and effective. The second shot is in the ballroom.

Marty is off to the side, hoping to find a girl to dance with, when Clara’s original date walks up to him, offers him five bucks to playact as his old Army buddy and get Clara off his hands. Marty can’t stand the idea, the guy finds another, they walk over to Clara who tells them that she’ll walk home alone, and then Marty walks over to Clara. It’s a lot going on in one shot, the camera only pans around on a single point to watch the individual moments, and it’s great, but the best part is the use of a mirror. Mirrors are used to imply double identities, and the only character who shows up in the mirror is the man asking Marty to take Clara off his hands. It’s a pillar that Marty is leaning up against, but we never see him in it, only the other guy, implying his two-faced nature. It’s a subtle thing to start the shot, and the fact that the rest of the action runs around the room, the camera follows it, and everything is incredibly clear with minimal dialogue, is rather impressive. It’s also really subtle, calling no attention to itself, but it’s a model of intelligent and efficient filmmaking, the sort of thing you might expect from an independent film with a low budget. Delbert Mann did a great job.

The movie is touching, surprisingly well made, and really well acted. Ernest Borgnine is wonderfully unguarded as the hurt and kind Marty. Betsy Blair sells Clara’s mousiness perfectly. Esther Mincciotti feels like she’s just being herself as Marty’s mother. It’s really a wonderful movie, but Clara really needed that final moment the movie denied her.