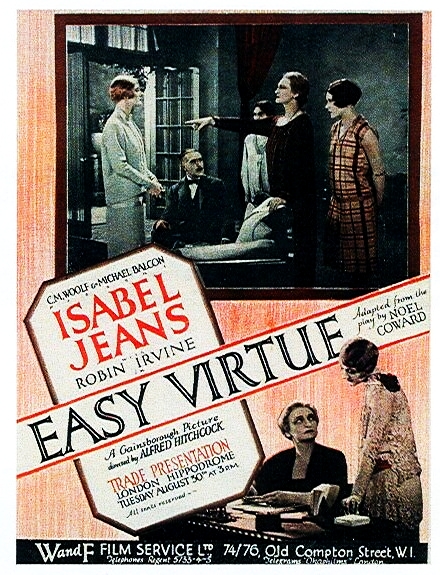 #39 in my Ranking of Alfred Hitchcock’s films.

That opening courtroom sequence takes about twenty minutes and is so effortless inventive with its editing, jumping back and forth and time as it tells the story of Larita Finton, wife to an abusive drunk who had her portrait painter fall in love with her as she sat for him. Through a series of events that could be interpreted very unfairly against Larita, she is accused of infidelity against her husband with the painter (which the intertitles constantly refer to as a co-respondent) and loses the divorce suit.

What really stands out about this sequence is how Hitchcock jumps back and forth between the timeframes. Each jump from the courtroom to the past events is aided by a visual aide. There’s a decanter that the prosecutor asks about, the camera pans in, we notice a cut, and the camera pans out to reveal the scene in the past. This also happens with a letter (written by the painter to Larita professing his love). The assuredness of the moves is really quite infectious.

Besmirched, but with some money left to her by the painter who died in the events, she retreats to Southern France to get away from her infamy. It is there that she meets John Whittaker, the son of a wealthy English country family on holiday in the region. He insists on marrying her without knowing anything about her because he just loves her so much despite her protestations that he should probably know a bit more about her. She never manages to get this information to him (one of my problems with the film), they get married and go back to his country estate where his kindly father and suspicious mother still live.

Larita’s life in the country estate of the Whittakers dominates the final hour or so of the film. It’s a slow degradation of feeling that eats away at John at the hand of his mother. She’s instantly suspicious of Larita, recognizing her from somewhere but she can’t pinpoint it. Even without a solid reason (Larita’s scandal), Mama Whittaker simply uses her powers over her son to drive a wedge between the newly weds until the scandal is revealed and used as the excuse to finally split them apart completely. That split happens at a big party when Larita decides to completely embrace her scandalous reputation, manifested by her having a servant cut the frilly parts of her dress off, leaving a much more flapperish dress in its place, and seems to have come to peace with who she is supposed to be. I was reminded of Easy A, the Emma Stone film from a few years back, where Stone’s character is branded as loose so she just sews a scarlet A onto her black corset which she flaunts around school.

However, the very final moments of the film undermine that with Larita breaking down into tears after her uncontested divorce, saying, in an intertitle that Hitchcock later called embarrassing in his interview with Francois Truffaut, “Shoot! There’s nothing left to kill!” So, she embraced it, but then it destroyed her. Considering the Victorian image of life in 1920s Britain, I sort of get it, but it still feels like the movie having it one way and then instantly turning to have it another.

Its first twenty minutes is fantastic, the bulk of the rest of it is fine, and the finale is curious. It’s not bad, showing off Hitchcock’s growing sense of editorial flare, but I just don’t think it quite connects as well as some of his other silent.