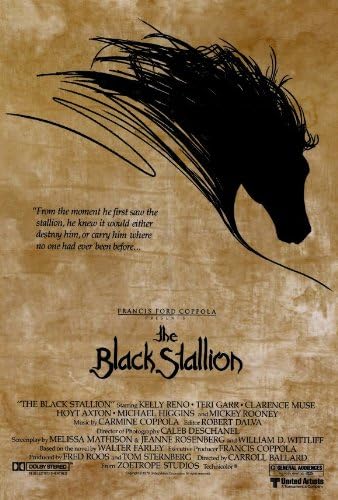 I love how quiet this movie is, and I also love how loud it gets. The sound design of this film is absolutely amazing and really helps with the fact that there’s so little dialogue in general, especially in the first half, and the center of the story is the relationship between a boy and a horse where they can’t communicate verbally. With that in mind, sound design isn’t just important, but it needs to be visually engaging, and The Black Stallion is really beautiful.

Alec is a small boy on a trans-Atlantic voyage with his father, a good man who likes to gamble. While wandering the boat alone, Alec finds the titular black stallion that’s being transported with them to America. He immediately tries to form a bond with the wild creature, offering it cubes of sugar, but a disaster strikes the boat in a storm and the two end up stranded on a small island together with the rest of the ship’s compliment lost at sea. The quiet of the lazy sea voyage on a steamer breaks into an all-encompassing din of fire, rain, screams, and whinnies. When Alec wakes up, everything is quiet again on his small island with nothing but the soft waves crashing against the shore.

It’s this time on the island that the movie is at its absolute best. It’s almost a silent movie in that there’s no dialogue, not even Alec talking to himself. We see his early struggles to survive (including a failed attempt at spear fishing with a pocket knife), and his ability to adapt by eating seaweed. It’s the horse, though, that is Alec’s main focus once survival has been accomplished. The relationship feels very earned as Alec slowly gets close enough to feed the stallion with some seaweed and the horse saves Alec from a cobra. It’s when the two connect completely when Alec figures out how to ride The Black, and it’s a completely magical moment.

Alec draws The Black out into the water, and it’s all filmed from below the water’s surface. We just see their legs, Alec leading the horse, until Alec’s legs and feet disappear from the sandy bottom to reappear on the horse’s sides and we realize that Alec has mounted the large animal. They tear across the beach, with Alec falling off and learning to maintain himself bareback on a wild horse, and it’s obvious that Alec is played by Kelly Reno, the boy who plays Alec the rest of the movie. This reminds me of how it was plainly obvious that David Bradley was always the one interacting with the kestrel in Kes. I know that Kelly used a stunt double for some of the stuff later in the movie, but it was key to see him in the island setting and be completely convinced that it was him the whole time there in order to sell Kelly on the horse in the races later in the film.

Once Alec and The Black get rescued, the movie loses a bit of something. What follows is still good, and often very good, but the magic seeps out of the film a bit. Alec and The Black meet up with Mickey Rooney’s Henry Dailey, a former jockey, who ends up teaching Alec how to ride in races. The scene where Alec proves the speed of this paper without horses to those in charge of racing decision to face The Black against the two most prominent race horses in America at the time is done in the dark, in the rain, and we see everything from the sidelines, watching Alec disappear out of frame, hearing nothing but the beat of rain. It’s really tense and wonderful.

The eventual race is a bit predictable with a shaky start and last second win, but it works. It works because of the emotional bond between Alec and The Black the movie has been building since the opening minutes. Even in the final seconds of the race, the focus narrows back down to the two, giving us brief flashbacks to Alec’s first rides on The Black on the island. The satisfaction comes less from the win and more from the reclamation of the feeling Alec had on the island. Ever since he came back to civilization, the relationship between him and his horse has been muted somewhat in the new setting. Life in civilization has put a shroud between them, and it’s only in the final moments of the race, when the boy and the horse gel for the first time since the island. It’s a moment of elation as Alec spreads out his arms, not in victory, but in joy.

The movie is beautiful to look at, wonderful to listen to (sound design for which it won an Oscar), with a solid child performance, and a very good supporting performance from Mickey Rooney. It’s core, though, is extraordinarily strong, with the bond between Alec and his horse very clear and well done, mostly without any dialogue. It’s a wonderful film.