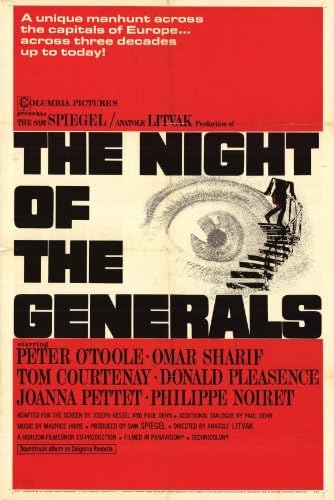 In the middle of war, with death everywhere, the loss of a single life should still matter. That’s pretty much the message of the film, though it does try to become a sort of mini-epic that includes the July 20th assassination attempt on Hitler that does tie in a bit thematically with the main plot. It’s chock full of great actors doing their duty as actors and is all handsomely presented. It’s one of those interesting little World War II movies that largely sidesteps and ignores the bigger issues of the war (never mentioning Jews, camps, Roosevelt, or much else about the conflict overall), instead just telling a procedural murder mystery that happens to be set in Nazi occupied territory across several years of the Second World War.

A prostitute is murdered in Warsaw in 1942, and the only witness saw the perpetrator walking away, but the only detail he could make out was that the man was wearing the pants of a German general. In comes Major Grau, a German officer dedicated to the ideals of justice. Yes, there is death happening everywhere in the world right now, but, as he quotes the Furies, blood has been spilt and justice must be done. What makes men heroes on the large scale makes them monsters on the small scale, he reasons, and he must bring justice.

There are three generals who cannot account for their whereabouts that night in Warsaw. Grau wants to interview all three, but none of them want to give a major, concerned with one little murder in the middle of a war, any of their time. Grau, though, before he can do any real questioning, gets promoted and sent away, knowing full well that he was gotten rid of. The setting jumps to Paris a couple of years later when all three generals are in the same place and Grau shows up, able to continue his line of inquiry.

Two of the generals are involved in the July 20th plot (with Rommel given an ahistorical role in a cameo for Christopher Plummer that ends with him getting gunned down by Allied aircraft), but the third, Peter O’Toole’s General Tanz, is not. He’s a psychopath, and we’ve seen that from the beginning as he tore down a section of Warsaw in response to a single sniper. Grau couldn’t quite zero in on Tanz, though. He had seen too many vicious men in war who did not go off and murder prostitutes in their spare time, besides, he couldn’t account for the whereabouts of the other two either. And this is where the movie kind of loses me for a bit.

We see Tanz through the eyes of his temporary driver, Corporal Hartmann, a young NCO and hero of the Eastern Front who wants little to do with war, having his hero status mendaciously foisted upon him by his superiors to cover up an embarrassing defeat where he was the only survivor. Hartmann ferries Tanz around Paris in civilian clothes, stopping twice at an art museum to inspect some decadent capitalist art where Tanz focuses on van Gogh’s self portrait done in the insane asylum. Tanz, you see, is crazy, and the movie wants to explore that insanity, but the movie has nothing to say about that insanity and it doesn’t document it that well either. This extended sequence of Tanz going around Paris, seemingly on the verge of snapping the whole time as he downs a bottle of cognac and smokes like a chimney, feels like far too little material for the time given to it. I think they covered his madness better while in Poland, watching him tear down a city because of the actions of a single man.

I had questioned the movie’s framing device early, and while I don’t think it’s particularly well integrated, especially in the beginning, it does ultimately have the story’s resolution. The problem, especially near the start of the film, is that we’re looking at characters that we don’t really know and don’t get introduced to until much later. On top of that, the story being told isn’t being limited by point of view, instead we’re seeing the movie unfold as it would without the framing device. It takes a little more than halfway through the film before we really feel like the stuff interspersed through the story will actually pay off. The payoff is well done and satisfying enough, but I largely wish that it felt more satisfying early instead of confusing.

At the heart of all of these characters and stylings, is the question that drives Grau, does the life of an individual matter less in a time of mass death? I think the contrast between Grau’s search for the killer of a prostitute two years earlier with the attempt to assassinate Hitler is an interesting one. Grau attempts to arrest the guilty general just as the Valkyrie plot falls apart, and he gets asked the question about why he cares about one death and not the attempt on another life, his Fuhrer, and Grau doesn’t seem to have an answer. His smirk is enough, though, and it seems to be the difference between war and mere violence.

It could have gone further with its questions. It could have used its framing device better. It could have spent less time trying to not understand Tanz. And yet, I’m actually quite happy with the film. It’s a bevy of high quality actors doing what they do best in a story that, despite its flaws, is actually quite interesting with something on its mind.