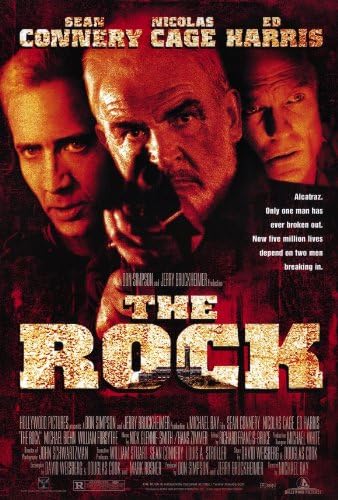 One of the reasons this movie works so well is the complete commitment to the reality of the film from the actors. From the main three actors to every marine, SEAL, and FBI agent, every actor is 100% committed to the story of a deranged marine general stealing chemical weapons and threatening San Francisco. The style is hyperactive, the music is pounding and propulsive, and the action moves at a high paced clip from beginning to end, almost never slowing down to breathe, but through it all, Nicholas Cage, Sean Connery, and Ed Harris sell their characters fully. It provides us with the emotional grounding that we can hang onto through all the insanity that surrounds it.

Ed Harris’ General Hummel is a really good antagonist. I mean, really good. He’s driven by an injustice that he sells to the audience really well. Men under his command, doing illegal missions for the US government, were left to die in the field and their families told nothing while given no benefits. Men he was in charge of and forced to watch twist in the wind to no purpose. His rage, sold by Harris, is palpable, but Harris doesn’t overplay it. It’s the contained rage of a man who’s been fighting battles for his whole life. It’s the focused rage of a man who knows how to make a plan and follow through. It’s the dedicated rage of a man with resolve. When he and his men storm into a naval base under the guise of an inspection and walk away with fifteen VX gas rockets, we see a man of honor taken to the extreme.

On the other end is Stanley Goodspeed. He’s a chemical weapons freak who leads a boring life. He drives a Volvo, a beige one. Our introduction to him is watching him use a toy gun to start a Rube Goldberg machine that ends with a hula statue consumed in flames. He’s also thrown into a glass room where he has to deactivate a sarin gas bomb against a ticking clock showing how in control he is in a stressful situation involving his area of expertise. It was almost a lab experiment, though. The only people around him he ignored or shoved away in order to work. He was given the weapon to defuse, he didn’t have to go out and find it.

The third main character is James Patrick Mason, Sean Connery’s character. He’s a British Intelligence operative who’s been in the American prison system for over thirty years, escaping from two maximum security prisons along the way, including Alcatraz where General Hummel has set up operations. I like the little theory that Mason is an alternate universe version of James Bond. It’s amusing.

Anyway, getting Goodspeed and Mason to the Rock involves a car chase through San Francisco (with plenty of destruction) and an underwater incursion into the bowels of the former prison. It’s slick, frantic, and done with good humor to help balance out the destruction.    The pair soon find themselves alone on the island against a bunch of marines when the SEALs providing them support walk into an ambush and all die.

And that’s when the movie distills down to a conflict between three people. General Hummel is trying to smoke out the two last members of the incursion team while Goodspeed is focused solely on the deadly chemical primed to shoot and Mason is more concerned with finding a way to escape everything at last. It’s that dynamic that really drives the film up to its exciting, explosion filled conclusion, but the movie makes its one serious mistake in order to extend the movie to its final fight.

Hummel has brought a cadre of marines with him. He knows most of them, but not all, represented by two captains, Frye and Darrow. Why a general with decades of combat experience couldn’t find a full team that supports him (I’m think of Marco Ramius and his officers in The Hunt for Red October) escapes me, but on top of that, the second they show up on screen it’s obvious that they are psychopaths with no interest in the point of the mission. They stick out sorely, and they are there because Hummel is a man of honor and a soldier and not a murderer, so once he flinches in the final act, the threat of deadly force on the city disappears. It has to be replaced with something outside of Hummel, and they chose cartoon characters. I can imagine other ways to extend the threat beyond Hummel (having one marine who believes in the mission, doesn’t care about the money, and decides that the lives of the civilians of San Francisco are less worthy than the memory of his fallen comrades), but they didn’t go with that. I really want this movie to be a solid fifteen minutes longer (on an already kind of long two hour and fifteen minute runtime) in order to build up this new character I’ve just made up in my head and sell the final turn better.

The action is frantic but clear. The movie clips along breezily as it destroyed half of San Francisco. The actors are all shockingly good in characters that all feel surprisingly believable. All of it revolves around a bad guy with a strong motive. Really, aside from Captains Frye and Darrow, this is just propulsive action filmmaking at its finest.

6 thoughts on “The Rock”