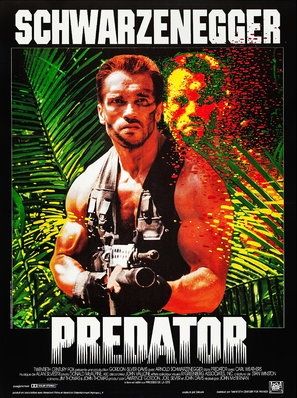 #5 in my Ranking of John McTiernan films.

What I find most interesting about Predator from a narrative perspective is the fact that it changes genres after half an hour. It quickly runs through the conventions of a big budget 80s action movie with a huge action set piece led by the muscle bound lead Arnold Schwarzenegger, the plot essentially resolves, and then it becomes another movie for the next hour or so.

The action movie of the first half hour is quick and dirty. We get a group of elite mercenaries who are given a mission by a CIA operative to go into another country and extract a foreign minister, and we have just enough time with each of them to differentiate them from each other. We know little of them beyond one is a sexual tyrannosaurus, another loves telling dirty jokes, and the rest look different. Along the way to the remote rebel base in the middle of the jungle, there are hints that there’s something else out there, but they’re largely pushed aside in favor of focusing on the mission. The attack on the base is a great example of excessive action filmmaking from the 80s with quippy one-liners from Arnold, big explosions, lots of gunfire, and a well placed knife to the abdomen from several yards away. The plot resolves when Arnold finds out that his old buddy, Dillon the CIA operative, was lying to them about there being a foreign minister in need. They were after a document stash instead. This doesn’t really come up again. It does provide a bit of tension within the group as they head back to the pickup site where Dillon isn’t viewed as trustworthy.

It’s at the tail end of the attack that we get our first real confirmation that there’s something else in the jungle with them. I gotta say that I love the point of view look for the Predator, using faux heat maps to view the world. It’s decidedly different from how we look, more than just a filter over an image but something almost alien that we have to interpret in a new way.

And that’s the point where the movie turns from an 80s action movie into something else. It’s a claustrophobic monster movie that’s set outside and where we barely see the monster. I find the first half hour of the film fine if not particularly special, but I find the rest of the film something else entirely. It’s a survival horror film against a powerful and intelligent enemy that gets three, count ’em, three separate reveals, each one cooler than the last.

As the hunt goes through our discernable mercenaries, ultimately leaving Arnold and the young woman they captured, the deaths become more elaborate and brutal. One of the joys of the film is the fact that both predator and prey are actually intelligent. The mercenaries set traps. The predator can work his way around them. It’s a game of cat and mouse, and its only by chance that Arnold figures out a way to hide himself (though wouldn’t the mud heat up to Arnold’s body temperature after a time?) leading to the final large confrontation. The way Arnold almost gets the predator into a trap, the predator figures it out and sidesteps it is a really satisfying moment. It shows that both Arnold and the predator are smart and strong opponents.

Of course, the creature design is great. As I said, the predator has three reveals. The first I the first time we see his light bending camouflage. The second is when he uncloaks and we see him with his mask. The final time is when he takes off his mask, revealing his fantastic set of elaborate and hideous jaws underneath. Each time we see the creature, he’s revealing more and it’s really satisfying, reminding me how the xenomorph keeps changing form in Alien.

It’s first act is rudimentary and functional, and the thinness of the characters doesn’t help. However, the style and execution of the bulk of the film is what makes it special. It’s a very fun creature feature that understands the basics of how to use its creature effectively in ways that Spielberg accidentally found in Jaws. It’s a really fun balance that we get a lot of looks at the creature but it gets to keep changing, taking the design deeper several times. Arnold is himself, and the rest of the cast acts appropriately tough and scared. It’s a good time at the movies.