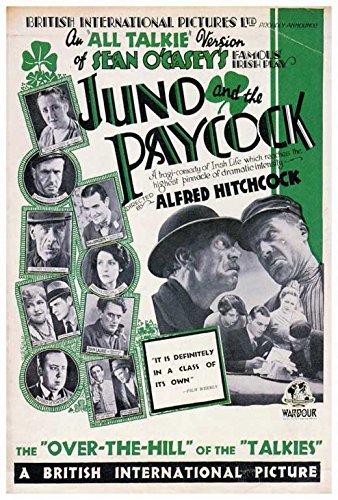 #52 in my Ranking of Alfred Hitchcock’s films.

This has to be Hitchcock’s least cinematic film he ever made. It’s a filmed play with almost nothing cinematic to add to the mix. It’s a miscalculation of the early sound era that equated theater and film because they shared a lot of the same parts. There are actors, sets, lights, and dialogue, and yet the mediums are actually really different because of the camera and the edit inherent in film.

The story itself is nothing that special. It’s the counterfeit rise and then real fall of a poor Irish family in the early 20th century. The titular Juno is the female head of a small household of four with two adult children, and the paycock is the male head. Juno’s level-headed while her husband, Jack, spends as much of his time drinking in a bar as possible. The girl, Mary, is courting a young man while the boy, Johnny, lost his arm in the Irish Civil War while fighting with the IRA. There’s a good amount of time trying to set up all four characters, but most of the time is really dedicated to Jack, the vessel through which most of the exposition flows.

The story turns when they discover a relative has died and left them several thousand pounds. Their hardscrabble life is over. Jack’s drinking away all of their extra money is done. Immediately Juno goes out and starts taking out large loans for furniture and other items around the house. Mary gets the attention of a new beau who whisks her away from her current beau, Jack feels like a big man around town, and Johnny stays remote and hidden in the background, consumed about news that started the movie of one of his friends from the IRA having gotten killed. The treatment of Johnny is the only real cinematic touch in the entire film. As conversation goes on around him, the camera pushes in to watch him at key points of the film. It’s probably the only way to highlight him since he’s so quiet through much of the story anyway.

The predictable thing happens and the money from the relative doesn’t come through. Seriously, the second I saw Juno in the furniture shop taking on the debt, I knew there wasn’t going to be any actual money for the family. The family then gets brought low. They have to sell everything from the new furniture to the old to settle their debts. Mary’s new beau disappears after he impregnates her, leaving her a ruined woman in 1924 Ireland and disowned by her father. Johnny gets carried away as an informer by other members of the IRA. Jack takes the last of his money from his shoe and goes off to have a drink. Juno’s left alone in the empty apartment, wailing about the fate of her family.

Now, the weirdest part of the ending is that, at least the way the film presents it, it feels like the movie itself agrees with Juno’s assertion is that Jack is the source of their financial woes, but it wasn’t Jack who went and took out massive loans. She was the cause of the family’s newly destitute state. Jack just drank, like he always did. If the moment is supposed to be ironic, that depends on the execution of the individual performance, and I don’t think the movie captures that feeling.

Anyway, in terms of the story itself, it’s fine. It’s not great, but it’s fine. In terms of its cinematic execution, it’s boring. It’s a series of long, static shots that never look in the direction of the fourth wall in any of the limited environments. It’s quite literally a filmed play, and I think it suffers for it.

Blackmail was in production when The Jazz Singer came out and they retooled it for sound. It was already effectively one picture that got sound added. Juno and the Paycock feels like a studio not quite sure what to do with sound finding one of the more obvious choices (a play) and just handing the assignment to one of their contract directors. I get the sense that it was filmed really quickly, possibly in less than a week, and then quickly assembled for release. This feels like chasing a fad more than compelling storytelling.

6 thoughts on “Juno and the Paycock”