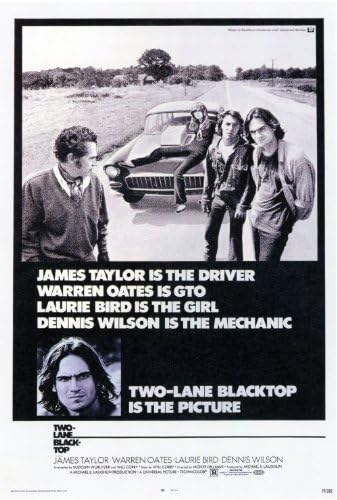 The people who love this movie seem to love it for that certain feeling that it gives them. Reminiscent of an era they lived personally, the film evokes their own past experiences, or at least past experiences they wish they had had, that enhances the craft and lax storytelling of the picture into something else entirely. I do like the film. I think it’s an interesting film with a worthwhile story to tell and that it does it well, but there does seem to be that sort of disconnect because I was never a child of the 60s learning to say goodbye to the hippie era.

It’s a road trip movie without a real destination. It’s a race movie where everyone stops for coffee so the other guys can catch up. There’s no real destination. There’s no real purpose to the journey, and that’s the purpose of the film. Of the four main characters (you could say six if you include the two cars), only the Mechanic seems to know exactly what he wants, and that’s to wander from race to race with his car, fixing it when it breaks and fine-tuning it before every showing. The other three, the Driver, the Girl, and G.T.O are almost completely defined by their purposelessness that manifests in different ways.

The Driver starts the film like the Mechanic, only out for the next race, but it’s the introduction of the Girl that upends everything. Not immediately, of course, but steadily, the Driver seems less concerned with his core purpose as the Girl gets closer and then pulls away, undermining the relationship between Driver and Mechanic. The girl is purely a drifter. She jumps into their car at a roadside restaurant after collecting her things from a rundown van and just accepts their destination as her own. She’s never gone east, you see, and going east sounds cool so she’s on board. She doesn’t seem to understand the effect she has on people, blind to how they see her, and in a complete haze. She’s disengaged from everything save what’s in her own head. The last character is G.T.O., played wonderfully by Warren Oates, and he’s a motormouth who’s constantly changing his story about where he’s going and where he’s from. His shifting tales tell us his uncomfortableness in any one spot, and he’s the perfect guy to simply take up a random challenge for a cross country race.

As mentioned earlier, the other two characters are the cars themselves. The Driver and Mechanic drive a 55 Chevy that they’ve souped up lovingly, and G.T.O. drives a, well, a G.T.O., fresh off the assembly line. The people jump into and out of each car almost randomly. G.T.O. picks up hitchhikers as often as he can, giving them a new version of his life story, and the Girl slides into the passenger seat before the occupants of the two cars have even really introduced each other. Quickly follows the challenge to go from Arizona to D.C., and the movie feels like it’s going to be an actual race for about five minutes until G.T.O. gets pulled over by the cops and the Driver stops to tease him. They stop a bit further up again where the Mechanic looks at the G.T.O.’s engine and tells him he needs a new part within fifty miles, but sure, they’ll wait until G.T.O. has taken care of the issue. By the end of the film, the race has been completely forgotten as the Driver tries to get the Girl back from G.T.O. at a roadside diner, and then she just jumps onto the back of a motorcycle and drives off away from both of them. The race is over before they get past North Carolina, and they all go their separate ways, the Driver and the Mechanic to find another race, and G.T.O. to find another hitchhiker to tell another story to.

The point of the film then becomes obvious. None of these people have a real purpose. Even purposes that they define for themselves are tossed off without a second thought. They have no place in society, and they can’t seem to make one for themselves out of it. It’s an interesting portrait done well, but, as I said earlier, I think the real connective tissue between the film and the audience is the era, that space between the 60s and the 70s where the hippie movement died and those who could have been part of that were still searching for something to latch onto. It’s a feeling thing that doesn’t really translate across generations, but I can understand it intellectually if not emotionally.

In terms of the actual craft of the film, it’s really well made. Monte Hellman is incredibly precise with his camera, coming up with surprisingly striking compositions to capture action and movement across all three dimensions of space. I love Warren Oates as G.T.O., but I find James Taylor a stilted performer as the Driver. He’s often called introverted by those who love the film, and while that’s true, he’s also not great at actually delivering dialogue.

The much better version of Easy Rider, Two-Lane Blacktop is a loving look at the hole between generations. It’s well made and largely well-acted, but it really does seem to require a personal connection to the era in order to work as well as it can. Maybe further viewings will help bridge that gap. I’m perfectly willing to give it multiple viewings, though. It’s definitely worth the time.