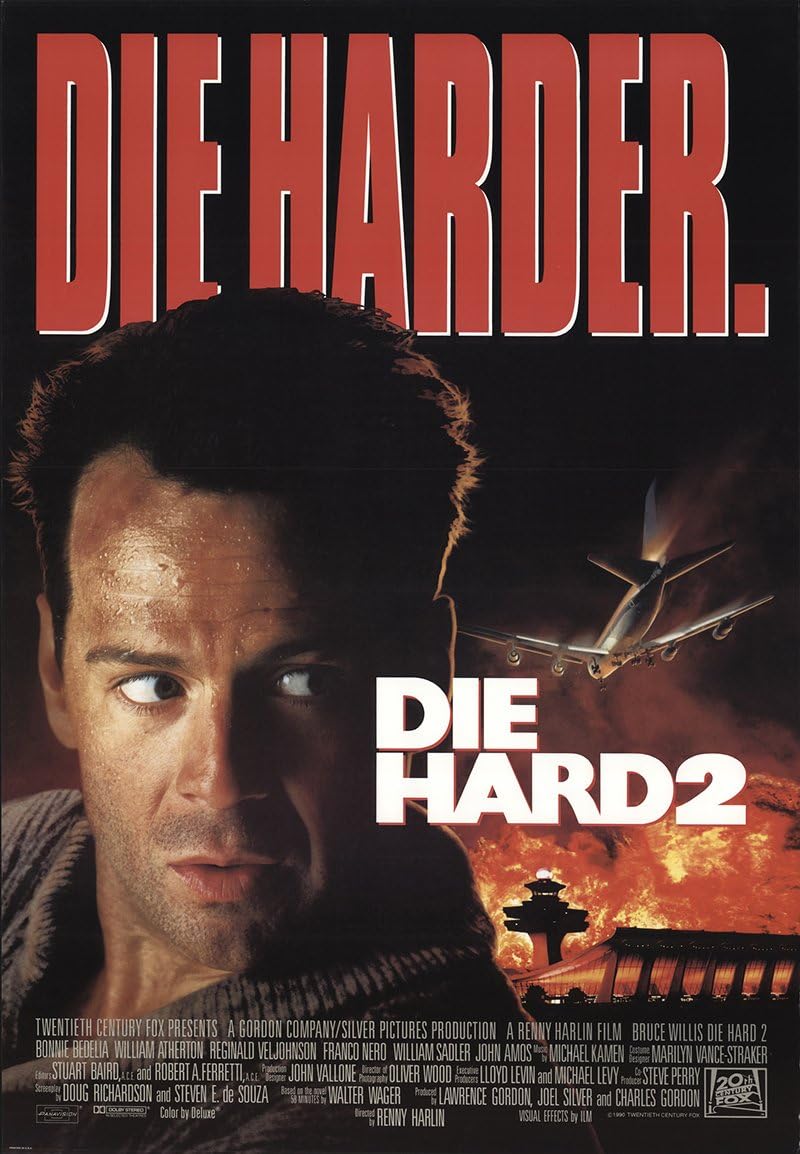 #4 in my ranking of the Die Hard franchise.

This is a movie that is driven purely by plot needs with no room for anything else other than action scenes. No one feels like they have a life outside of the basic plot actions that they need to fulfill. The whole exercise then feels like a mechanical product with no life or soul to it. It feels dead because there doesn’t feel like there’s a single living person involved.

It’s pretty obvious that this movie was originally a script that had nothing to do with John McClane because McClane feels oddly out of place for most of it. He wanders in and out of rooms that he shouldn’t even begin to have access to as a Los Angeles police officer in a Washington DC airport. His emotional connection to the terrorist attack on the airport is thin, almost tacked on. McClane has one very brief interaction with the main antagonist, Colonel Stuart, at the very beginning of the film, and the two don’t meet until they’re punching each other on the wing of a 747 at the end of the film. There’s a deep disconnect between McClane and the rest of the movie that feels like a lost Airport sequel more than a sequel to Die Hard.

Speaking of Colonel Stuart, he’s a waste. William Sadler is one of those really interesting and intense character actors who popped up everywhere in the 80s and 90s, and all he really does in this is explain and dictate. He explains his plan and he dictates rules to the airport’s control tower. He talks about his motive once, but most of his interactions with other characters are perfunctory and plot based. This is where the lack of interaction with the main character really begins to fray the film. Stuart interacts so much more with the air traffic flight director Trudeau than with McClane, like the original story was about them in a game of wits and the screenwriter simply added McClane running around the airport as filler to get him into the story.

In the original Die Hard, John came to Los Angeles in an effort to make good with his wife, and a bunch of terrorists got in the way, taking Holly hostage. In the sequel, it’s unclear how much danger Holly is ever actually in, and it seems arguable that all of McClane’s actions actually put Holly in greater danger than if he had simply waited in the airport terminal for everything to resolve on its own. You see, Colonel Stuart’s plan is to hold the airport hostage for an hour (58 minutes, actually, after the source story’s title) so that a foreign dictator can safely land at Dulles and Stuart can steal him away for a, supposed, payment and a hit against communism somehow. At no point does Stuart seem willing to kill everyone in the sky if things go well. He does crash one airplane, but only after Trudeau and McClane (on his own) try to get to a communications tower in contradiction of Stuart’s orders. Stuart never threatens to down any other plane in any other circumstance unless he doesn’t get what he wants. I do not see how McClane reads this situation as one where he needs to make the terrorists’ lives harder. If his objective is to save Holly, he should stand back and let things play out. If his objective is to simply do the right thing, he never seems to realize that he’s putting his wife’s life in danger. Either way, the smart everyman of the first film has become a psychopathic moron in the second.

The structure of the film is also really weird, mostly around a US Special Forces team led by Major Grant. They’re introduced about halfway through the film, do nothing for about half an hour until they have a staged shootout, and then they turn on the good guys with about twenty minutes left in the film. The late addition and lack of attention given to them makes their betrayal feel empty not surprising. I think they should have been introduced no later than half an hour in, taken a lead on the counterattack for an hour, working hand in hand with McClane for the whole time, and then, when things are looking like they’re unraveling completely, they turn on McClane, pushing the nadir further. This would also require more time spent with Grant and his men than with another pigheaded idiotic cop (the airport police chief Lorenzo) in the disdainful tradition of Deputy Chief Robinson from the first film.

In addition, the effort to bring a bunch of the pieces of the original Die Hard over and in Dulles Airport strains credulity. John McClane is there on the ground. Holly, his wife, is in a plane overhead. Okay, I can accept that, but then Roger Thornburg just happens to be in the same plane. And John calls Al for help.

Oh, and the throwaway tagline from the first film that became super famous simply had to be included in this one even though it actually made sense in context of the first film and comes out of nowhere in the second.

I simply do not like this film. It’s poorly constructed, wastes a great character actor in a nothing part for its antagonist, feels randomly assembled from different ideas, and continues ideas in the flattest possible way from the first film. Renny Harlin is a hack.