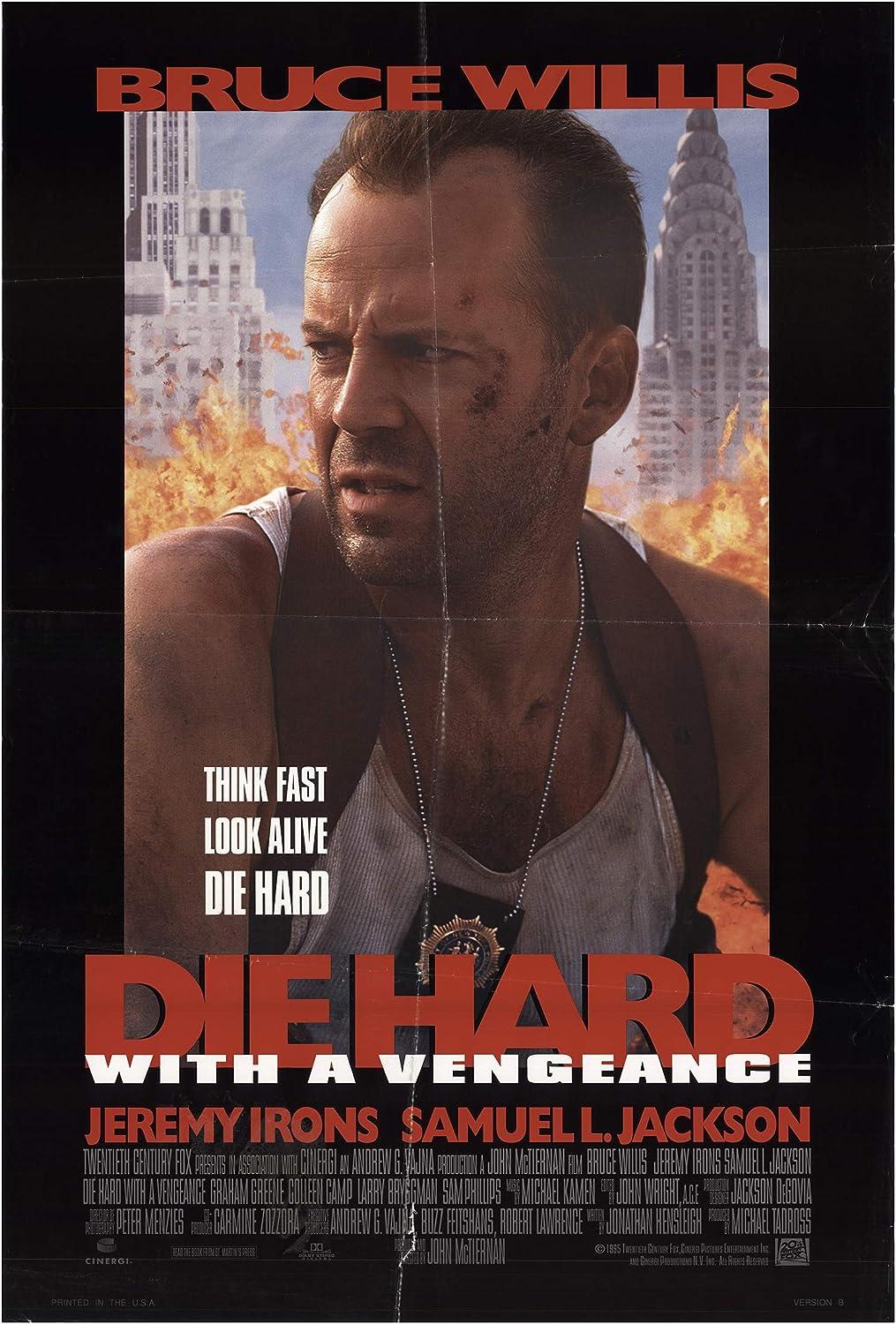 #2 in my ranking of the Die Hard franchise.

#2 in my Ranking of John McTiernan films.

Well, that’s significantly better. Where Die Hard 2 felt like the laziest kind of sequel, Die Hard with a Vengeance feels really fresh in comparison. It’s still following a lot of the basic formula from the first film (in particular an antagonist with outwardly terroristic ends but privately greedy ones, McClane operating alone, and English actors pretending to be Germans pretending to be Americans), but there’s more to the motions than simply repeating what came before. It’s actually a really clever packaging of the formula that makes it feel like it’s something different while still delivering a lot of the same beats. That’s not to say that it’s just a well dressed remake, there’s a lot of other fun stuff going on as well. Aside from a few nitpicks, this is really the best of the Die Hard franchise up to this point.

One of the things that sets this film apart is simply how clever it is. It starts as one movie for almost an hour and then completely morphs into another, and the change is seamless. John McClane, back to being a New York cop, is on suspension when a bomb blows up a department store in the city. The police receive a call from someone calling himself Simon playing “Simon Says” and demanding that John McClane perform a series of tasks or more bombs go off around the city, the first of which is to wear a vulgar sign through Harlem that will surely get him killed. In comes Samuel L. Jackson’s Zeus, a small business owner who simply doesn’t want to see a white man (especially a white cop) get murdered on the streets of Harlem in broad daylight, knowing that it would only invite more white cops into his neighborhood. Attached at the hip because of Simon’s insistence, the two spend the rest of the first hour racing across the city to Wall Street in order to get to a payphone, answer it, and prevent another bomb going off, but the timeline is literally impossible. Through some creative driving straight through Central Park, they barely make it but the bomb still goes off.

That first hour is really, really well done. We are right there with McClane, navigating the streets of New York as a very credible threat builds up around him. He and Zeus develop a 48 Hrs. type relationship where Bruce Willis and Jackson play really well off of each other’s antagonism. It’s taut, tight filmmaking.

And then, after the bomb in the subway under Wall Street goes off and Simon places a new threat on an unnamed elementary school in the city, New York’s finest very believably dedicate as many of their resources as possible to addressing this very credible threat, leaving open Wall Street, the Federal Reserve, and the movie to take a step back and show us Simon for the first time, managing a team to break into the Federal Reserve and its gold to haul away in dump trucks. The movie plays catchup, allowing the audience time to get a feel for Simon as he works his team and occasionally breaks away to taunt the police or McClane again. Hans Gruber from the first film is still a better villain, but Simon Gruber is good on his own, a definite step up from the non-entity that was Colonel Stuart in Die Hard 2.

One of the things about movies like this in general is that you need to find excuses for the hero to act alone without simply calling the police or for backup. If he could just do that to help relieve the threat, why doesn’t he do that? Well, Die Hard with a Vengeance answered that easily with the elementary school bomb threat, selling the reality of the bombs to both the police and the audience really well, and providing a couple of other extra explanations for why John can’t simply call things in. It’s a stretch of reality, but the movie sells it well enough so that it never really comes up as a question.

All of the pieces propel towards the conclusion filled with great stunts and fun action. My only real problem with the film is some moments of convenience that pop up from time to time to help keep the story moving, like when McClane launches out of an underground aqueduct being flooded, flying fifteen feet up in the air, right next to Zeus who’s driving along a road at the same time. The odds of that happening are not good, but hey, the movie needs to keep moving at this point and not slow down for McClane to catch a ride. I’ll accept it without too much complaint.

It’s intelligent and preposterous in equal measure. It takes the time to sell its own reality. It gives space for all three principle characters to play off of each other. Die Hard with a Vengeance feels open and alive and better constructed than any other film in the franchise up to this point. And, hey! They got rid of the idiotic police character who only gets in John’s way! I’m quite appreciative of that.

4 thoughts on “Die Hard with a Vengeance”