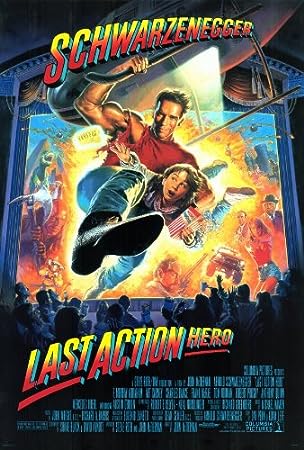 #3 in my Ranking of John McTiernan films.

In order for deconstruction to really work, the one doing the deconstruction has to love the thing to begin with. They have to love it and know it inside and out so that they can invert everything within it and make the work essentially regard itself in the mirror. That means the deconstruction needs to be honest but well intentioned. It’s not a reaffirmation, but a reexamination. And you know what? Last Action Hero is just that about the action movie genre and Arnold Schwarzenegger’s on screen persona. Schwarzenegger, John McTeirnan, David Arnott, and Shane Black came together to form a loving reexamination of everything that made Arnold’s career.

Using the fake franchise around the LA cop Jake Slater in its fourth installment, Last Action Hero uses literal magic to inject the audience stand-in of Danny Madigan into the action extravaganza and provide that knowing meta commentary about how things will play out in much the same way that Randy Meeks laid out the rules of the slasher film in Scream. He’s thrown into the Jake Slater movie by a magic ticket from Houdini given to him by the kindly old owner of the run down single screen movie theater on the corner of Danny’s little neighborhood in New York City. Once there, Danny interacts with all of the characters, pointing out the ludicrous nature of the film universe from its endlessly attractive women to the cartoon cat police officer, but Slater just thinks of the kid as crazy. His world is normal. It’s all he knows.

One of the things that I’ve grown to appreciate about John McTiernan’s movies is that he populates them with intelligent characters, especially antagonists. From Hans and Simon Gruber of his two Die Hard movies to the alien in Predator, antagonists don’t make stupid mistakes. They are smart, challenging foes, and the character of Benedict, played by Charles Dance, is no exception. He is the visually distinctive villain of the movie within the movie, the counterpoint to the cartoonish buffoon Tony Vivladi played by Anthony Quinn. He figures out quickly that Danny doesn’t belong in the world and, after a quick investigation, claims the magic ticket for himself, not quite sure what it does. Once he does figure it out, though, he quickly takes advantage of it, realizing the limitations of the world he currently inhabits and the limitless possibilities of being able to move into another world at will.

And its through that conflict that we get what the movie is actually about. It’s nothing particularly novel, but it’s certainly about the joy and magic of the escapism of movies, especially big, dumb action films with dubious logic holding them up. For, when Benedict escapes into the real world to discover that cops aren’t on every street corner, crime can happen without consequence, and bad guys can win, he feels liberated and suddenly Danny and Jack are running to catch up. Danny isn’t in control anymore because the rules he knows so well no longer apply. Benedict going into the real world levels the playing field.

Danny is really the anchor of the whole story. He does function as the audience’s stand-in, but he’s still a character in his own right. His home life sucks, and he’s obsessed with movies, particularly those starring Arnold. He lives with his widowed mother in a small apartment. He’s even afraid to go out his front door for very good reason being terrorized by a criminal with a knife in Danny’s own apartment when he opens the door at the wrong time. It’s through Arnold movies that he feels powerful, and it is by bringing the lessons of the Arnold movies into the real world that Danny becomes stronger as the movie enters its final stages.

Arnold’s Jack is no less a character, though his central dilemma of discovering that he’s nothing more than a fictional character gets a scene that Arnold can’t quite carry because he doesn’t have the range and then gets forgotten. He’s best when he’s playfully and charmingly interacting with the kid he doesn’t believe, explaining away the absurdities of his universe, and humoring Danny. It’s not that Arnold is bad, it’s that the script wants to go places and explore aspects of a fictional character realizing the limitations of his existence and the cyclical nature of going from one ridiculous adventure to the next, it’s just that Arnold isn’t up to the task in those moments.

I do wonder what this movie would have been if it had been able to use a real franchise as the movie within the movie. I’m not sure what would fit best (maybe Lethal Weapon), but the added nature of the audience seeing an actual franchise get taken apart this way might have been interesting. As it is, I know that initial reaction to the film wasn’t entirely positive. It’s a meta commentary that was at least ten years ahead of the rest of the movie world. Maybe if it had waited until Scream, it would have played better, but audiences apparently didn’t like seeing Arnold send up his on screen persona and the genre they loved, feeling that it was disrespectful. But, if that was the case, then it was a misinterpretation on their part, because the movie reaffirms its love for Arnold and his films by the end. It’s Jack who saves the day, not the real Arnold.

On top of the strong storytelling and deconstruction, there’s simply a lot of fun to be had on a moment by moment basis. Little nods here and there to the ridiculousness of the universe keep the affair lighter and breezier than one might expect. The little cameos, embrace of the absurd like the cartoon cat and the central movie plot involving two mafia gangs and a corpse filled with poison gas (which I feel goes on for too long, to be honest), and poking fun at F. Murray Abraham because he played Salieri in Amadeus are all amusing and help add a lot of color to the deconstructionist affair.