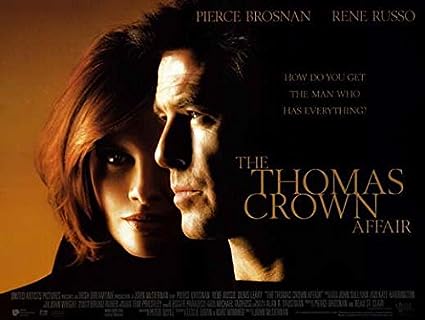 #6 in my Ranking of John McTiernan films.

This movie is at its most entertaining when people are stealing things, art in particular. It’s the story of a rich man who’s always in search of thrills and decides to steal one of the most valuable pieces of art on display at the Met. He’s fabulously wealthy and doesn’t need the money, but we could believe that he wants to keep it hidden behind a print of The Son of Man by Rene Magritte just as a private joke. The only problem with the film is when it asks us to emotionally involve ourselves in the lives of these people. They’re too cynical and detached from real life for that sort of investment.

The movie fires on all cylinders at the start and the end when we watch the two heists. The first gets laid out in exact detail with Thomas Crown, rich financier, going about his day making big deals and stopping by the Met to look at “his haystacks” by Van Gogh, a team of thieves sneaking into the Met through a hollow horse statue, getting into the room with the Monet, “San Giorgio Maggiore at dusk”, setting off all the alarms and giving Crown a way to quickly move in, grab the Monet off the wall, and throw it into his briefcase before simply walking out. Combined with the witty and fun score by Bill Conti, this first twenty minutes of The Thomas Crown Affair is the movie at it’s most effortless and fun.

That’s not really to say that the rest isn’t fun, it’s just different. In comes Rene Russo’s Catherine Banning, an insurance investigator who is out to save some Swiss men a one hundred million dollar check. She quickly zeroes in on Crown, and while she doesn’t have the kind of hard evidence that would allow Michael McGann, Denis Leary’s police detective, to actually do anything, she isn’t limited by warrants. She just needs to recover the painting, and in by being matched with Crown, the two have found the perfect match for each other.

They’re both thrill seekers and both know exactly what the other is about. She knows that he stole the painting, and he knows that she’s out to find the painting. He keeps her close because of the excitement and she reveals herself for the same reason. What follows is a game of cat and mouse that I felt was never about genuine emotion. It was always about using the other person to get what the other wanted, and when, late in the film, we see that Catherine had developed real feelings for Thomas, I didn’t really buy it. I suppose it was the depth of feeling implied by the sudden weepy turn by Russo, but it just didn’t feel like it fit the film. The Thomas Crown Affair isn’t about deep emotion, but thin fun.

The movie ends with its second heist, the effort to put the Monet back, and the manner in which it plays out is fun, calling back to the film’s opening, with a wonderful, if a bit outside the realm of believable, resolution. And, of course, the deep emotions get paid off through another couple of twisty turns.

I think if the film had managed to keep its eye on the fun angle more closely without falling into an emotional pit it didn’t really earn, this could have been a more clear-cut thin romp at the movies. Brosnan and Russo are fun as the leads. Leary is understated and effective as the police detective who’s sometimes a step behind on the plot but always clear-eyed when it comes to Catherine. Bill Conti’s music is delectably amusing, and John McTiernan’s direction is assured and confident. It’s a solid time at the movies.

2 thoughts on “The Thomas Crown Affair”