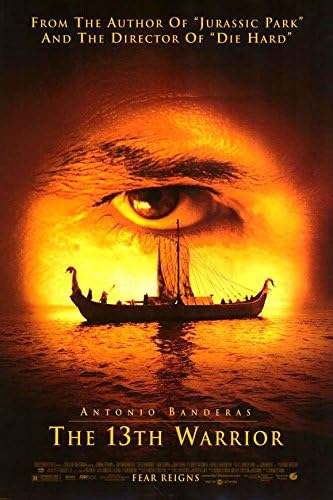 #7 in my Ranking of John McTiernan films.

You can separate your main character and you protagonist, but it’s hard to do well. The 13th Warrior attempts it, but I don’t think it’s really all that successful. There’s a technical polish to the film, especially in isolated sequences, and obvious talent behind the camera, but the story is surprisingly disengaging.

The problems are obvious from the beginning with an introduction that hops and skips from Baghdad through a long land journey northwards to Viking territory, an attack on the road, a brief introduction to the Vikings, the introduction of the foreign threat they must face, and the absorption of the main character, Ahmad, into the group as the titular thirteen warrior. It’s most jarring when the old crone announces to the surrounding tribe that the thirteenth is foreign (Ahmad being the only foreign man of fighting age there) and then there’s a hard cut to him packing up his horse to go along with them. He’s never given a moment to question the request or even consider it. He’s just automatically part of it.

The next major emotional hurdle comes when the group of thirteen warriors makes it across the water to find Hrothgar and his hall. There’s no attempt to get to know the villagers cowering in fear of the Wendol terrorizing them. Instead we get some vague palace intrigue that culminates in a fight between one minor character and another person who never rises to the state of character that ultimately makes no difference to the story. Ahmad does get some intimate time with a young, attractive woman of the village, but it couldn’t possibly leave an impression because she’s in and out with little introduction.

The movie works best when the action moves towards the quiet inspection of the clues in pursuit of the Wendol, the mass of bear men that descend on the village, killing as they will and taking the bodies of the slain to eat (this was based on Eaters of the Dead, of course). There’s a scene where Ahmad and the other twelve find a ransacked farm, and the camera quietly moves through the farm to follow Ahmad as he walks in and out. It’s a quietly effective scene.

Action in general is dark but assured, but there’s a curious distance to most of it because so few of the thirteen warriors make an impression. There’s Ahmad, his friend Herger, and the leader Buliwyf who make a real impression, the rest just feel like background noise, and as the action scenes play out more and more of the background warriors get chopped away, feeling like little is being lost.

Now, to talk about the difference between the main character and the protagonist. Ahmad is the main character, but Buliwyf is the protagonist. It’s Buliwyf who makes the decisions that drive the gang from one place to the next. It’s him who makes the large strategic decisions. It’s him that the final battle ends up revolving around emotionally, and yet, we don’t really follow him. We’re with Ahmad all the way, playing as follower to those around him. That moment early when he suddenly joins the other twelve is a prime example. He exhibits no agency on his own. The rest of the twelve affirm their desires to go on the journey, but Ahmad just appears in line. His efforts to fit in range from rather ingenious (John McTiernan has a thing for intelligently demonstrating the transition of languages) to amusing, but the amusing bits aren’t what drives the film, they end up feeling like distractions.

A final note: There are serious questions about the film’s authorship. By everything I’ve read, John McTiernan, the director, and Michael Crichton, the writer/producer, clashed extensively on set. After a disastrous test screening, McTiernan did not come back to the project (apparently off working on The Thomas Crown Affair that ended up releasing before The 13th Warrior), instead Crichton directed the rather extensive reshoots. So, who’s film is this? McTiernan is listed as director, but it’s an obviously compromised production with two authorial hands at play.

I’m rather mixed on this film. From a purely technical perspective, there’s a good bit worthwhile, but there’s also a problem in terms of emotional disconnect based on some narrative choices that don’t really work. The adaptation of Eaters of the Dead (which is, in turn, a rather clever take on Beowulf) could have been more engaging and entertaining than it is. It’s far from a disaster, but also far from a success.