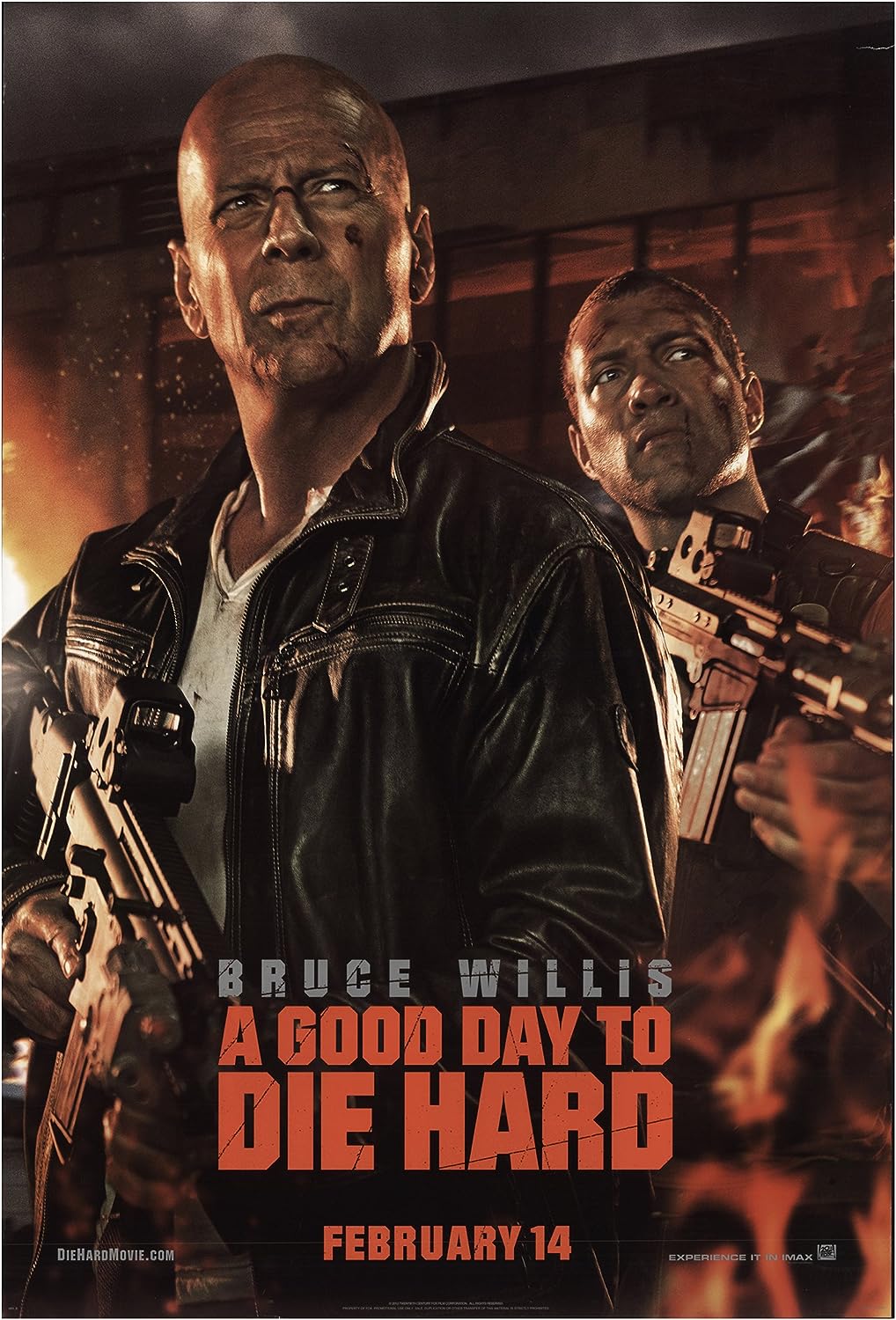 #5 in my ranking of the Die Hard franchise.

I’m not one to demand that films in a franchise adhere to the conventions and formula of those that preceded it, so the fifth entry in the Die Hard franchise doing stuff like going to Russia and essentially becoming a spy action thriller don’t bother me. What bothers me is that the trip to Russia is thinly drawn and ends up making little to no sense and the spy action thriller stuff isn’t exactly good.

There’s an exchange in Live Free or Die Hard where John McClane and Matthew Farrell are driving to West Virginia where McClane describes why he’s going through such a big effort to help: “I do this because there is nobody else to do it right now. Believe me if there was somebody else to do it, I would let them do it. There’s not, so I’m doing it.” As a contrast, here’s what John’s son Jack describes John as in A Good Day to Die Hard: “Fucking killing bad guys, that’s your thing.” In one movie, the franchise decided that John McClane wasn’t an everyman who just happens to get into over his head situations, he’s just someone who kills bad guys. He’s a generic action hero. He could be literally any other action hero since there’s nothing distinctive about him anymore.

One of the ironies of A Good Day to Die Hard is that John McClane is probably the best part of the film (despite Bruce Willis’s bored performance) and that the movie would have probably been improved by having less John McClane. The source of that irony is the fact that this isn’t John’s movie, it’s his son’s. Jack McClane is a secret agent in Russia out to protect a Russian in jail and on a hit list in order to find a file that has incriminating information on a prominent Russian politician. And, John just walks into the rescue attempt, screwing everything up and then tagging along for the rest of the adventure.

And the rest of that adventure is a bad Bourne knockoff. It feels like an attempt to extend the Die Hard series by introducing a new male action lead in the form of Jai Courtney as Jack, but the extension is literally just a bad Bourne knockoff. Shaky-cam car chases, European setting, even the Russian politician angle is all ripped straight from The Bourne Supremacy in particular. What makes it all worse is that this is another film in the franchise (after Die Hard 2) that’s so purely driven by plot needs that the several reversals of minor characters that turn the plot all fall flat because we spend literally no time getting to know the doctor Jack is rescuing or his daughter. So, when someone betrays someone else, it’s met with more confusion than shock. When it happens again, there’s little more than a shrug and a sigh and a hope that the movie is almost over.

The action ranges from competent to incomprehensible without any consistent aesthetic. The early handheld filmed car chases end up giving way to elaborate slow motion shots with heavy special effects. The plot resolution feels dead. The interactions between father and son feel thin. Ironically, this was the only film in the franchise explicitly written as a Die Hard movie with John McClane at its center, and it’s also the one that feels like it shouldn’t be a Die Hard movie at all (tying the wannabe Airport that is Die Hard 2).

I didn’t hate this movie. I mostly found it boring and unengaging. It was simply too inept to get all worked up about.

5 thoughts on “A Good Day to Die Hard”