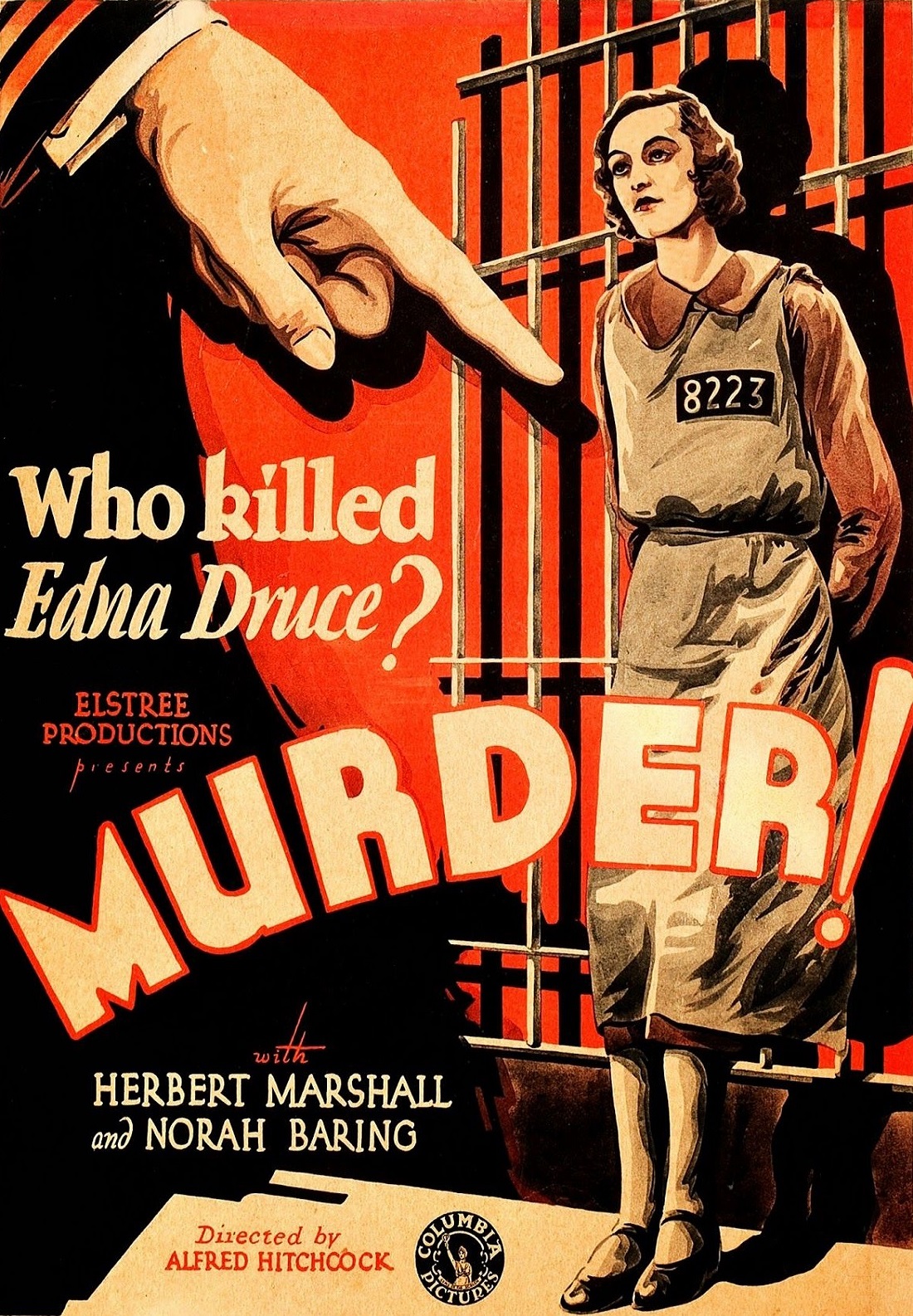 #44 in my Ranking of Alfred Hitchcock’s films.

This feels like is should have been an early Hitchcock film that fit in easily with the parts of his filmography that he’s famous for like The Wrong Man or North by Northwest, but Murder!‘s story of one man alone without being able to call the police is really weirdly built. It also contains some more misconceptions about the use of sound that were fairly common in the early talkie era.

My problem with the film is that an alternate theory to the murder doesn’t come up for about an hour. In that first hour, we see the immediate aftermath of the murder with Diana Baring, an actress, sitting over the corpse of a fellow actress from the same acting troupe, a quick trial, a long deliberation in the jury room, and one of the jurors deciding that something was missing from the evidence and deciding to take on two other actors from the same troupe to start up his own investigation into the murder. There’s a lingering question in the juror’s mind, one Sir John, about who drank the brandy from the empty container in the room, but it takes an hour for him to finally decide that someone else must have been in the room other than the two women.

I think it’s the jury room scene that highlights my issues with the first major part of the film. It’s a drawn out scene of about ten minutes where the jury foreman collects the votes (temporarily mislaying several of the votes along the way in a curious addition) and tries to come to a unanimous decision. The vote starts as 9-3 to convict, and he talks through all three jurors who voted to acquit. Most of the conversation revolves around dual personalities, fugue states, and the morality of putting someone to death. It would be an interesting enough discussion in a drama out to detail the ins and outs of the questions, but it ends up being a distraction and not germane to the point of the film which is a search for the real killer. It feels like talk for talk’s sake, a way to create a dialogue scene rather than using dialogue to tell the story at hand.

Well, Sir John is the final juror and the rest of the jury pushes him into voting guilty along with them. One thing about this film is that it continues to demonstrate Hitchcock’s visual acumen. The film is filled with moments of great visual flair and the eleven jurors towering over Sir John in a single shot, each of the twelve in frame and perfectly visible, is great. There are others like the early scene when an actress is talking with the landlady right after the murder and they go from one room to the next and back and the camera dollies back and forth with them which shows Hitchcock able to playfully and dynamically integrate sound into his films.

Anyway, back to the story. Sir John brings in two of the acting troupe’s members, a husband and wife pair, to help him navigate the crime scene and its surrounds and he does the work that the police should have done. I don’t object to the police doing a poor job of investigation when they are presented with evidence and a suspect that won’t say anything. I did find it weird that Sir John and Diana seemed to have some personal connection, but it was never explained until late in the film when the connection was really thin. It felt like, for a while, that Sir John was doing this less out of a sense of guilt over injustice and more out of personal pique. That’s a problem with clarity more than anything else.

Again, it takes about an hour before Sir John looks up and says that there must have been someone else in the room. It’s a weird hole in the character’s thinking because it seems easy enough. He’s convinced that she didn’t do it, but the idea that someone else entered the room and did it instead of her doesn’t come to him until quite late, and by that point, we’ve mostly forgotten the other members of the troupe.

There’s a scene very early when a policeman enters the troupe’s performance backstage and tries to interview them. It’s our introduction to everyone involved, but the movie drops all but two of them completely for an hour. So, when Sir John starts listing all of the other members of the troupe and how they could have been involved, it’s been too long for the audience to easily recall the names and faces required to help make the connections. We get lost easily by this point.

However, once they do decide on a suspect and move in on him, things pick up a bit. The confrontation is based around Hamlet’s confrontation of Claudius by Sir John presenting the actor with a scene of the murder itself, hoping to find a reaction. It works well enough to tell the killer that they’re onto him but not well enough to get him to give himself away, and the action culminates at a circus where he’s doing trapeze work.

The movie is overall pretty visually inventive, the problem is the plodding nature of the investigation itself. It takes forever to get to a point that it should have reached at the fifteen minute mark at the latest. What buoys the movie is really that visual inventiveness, especially when combined with the use of sound, and the rather effective ending to the film. As a showcase for Hitchcock’s directing ability, it’s a bit of a showcase. As an example of his grasp of story structure, it feels limited.