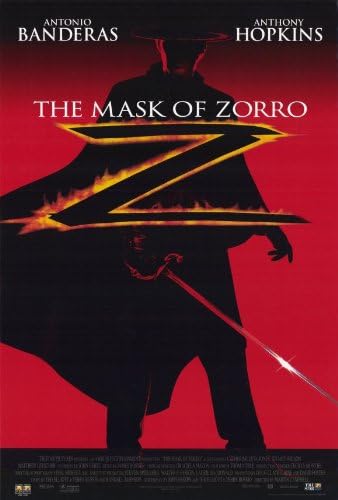 Buckles get swashed good and hard and sexy in The Mask of Zorro, and I find its energy, sense of fun and adventure, and its action to be invigoratingly intoxicating. This is one of the most purely enjoyable action movies of the 90s, and it makes the reboot of a long dead franchise feel like a completely natural and rational choice instead of a desperate cash grab.

The old Zorro, Don Diego de la Vega, finishes one last ride in the service of the people of California before the Spanish backed government pulls out completely, but his rival, Don Rafael, figures out Zorro’s real identity, throws Don Diego in prison, and takes away Don Diego’s daughter to raise as his own. Twenty years later, Don Rafael comes back to California, Don Diego escapes, and decides that the vehicle of his vengeance will be Alejandro Murrieta, a street urchin turned bandit with his own score to settle against one of Don Rafael’s henchmen, an American cavalry officer. So sets the stage of an adventure that sees lust turn to romance, hatred turn to murder, and injustice turn to righteousness.

In order to get close enough to Don Rafael and his daughter, Elena, Don Diego trains Alejandro not only to fight but also to act as a gentleman, weaving him into the upper echelons of California society quickly. The movie decides to spend a fair amount of time showing Alejandro’s evolution from ruffian to fighter, but it curiously decides to completely skip his training in charm. I would be surprised if Martin Campbell didn’t film a few minutes of something to add here, cutting it with the decision that the audience didn’t need to actually see that particular transformation, but it’s still just the slightest bit jarring when he goes from ruffian wondering why his armpit smells bad to Don Diego to well-refined gentleman in a single cut.

Still, he’s there and there he formally meets Elena after a previous meeting in his proto-Zorro getup where the two obviously lusted after each other. The dance that Elena and Alejandro partake in is filmed like an action scene, and it’s all about how the two need to have each other, stripping away the artifice of Alejandro’s disguise and Elena’s position. He goes off to discover the evil plot, and this is where the movie takes an extra step too far, I think.

I understand why they made Don Rafael a slave driver. Making an antagonist of him and having the audience consider death appropriate when his main goal was buying a country is a stretch. They had to give him something else, so running a slave mine to extract gold from the ground and then callously blowing them up to preserve the secret is a bit over the top. Still, the movie’s not meant to be a subtle exploration of consent of the governed or anything, it’s a rip-roaring swashbuckling adventure. Slave driver feels appropriate in that context.

The plot drives forward as identities get revealed, plots exposed, and swords crossed, culminating in a fight at the mine where the bad falls to the good. It has the appropriate amount of pathos for this kind of movie, asking for investment but not weeping. It’s mournful but not tear jerking.

The action of the movie is really the highlight. Done before CGI grabbed hold of Hollywood, it’s about men with swords fighting other men with swords. There’s a lot of clashing steel, body flips, and real explosions. It’s all filmed clearly and intelligently (no surprise given the results of Goldeneye). And, there’s a sense of fun throughout it all. It feels like Alejandro is enjoying himself while the mostly harmless battles play out. This is fantasy after all, where Alejandro can meet the same set of Mexican soldiers three times, beat them all in battle each time, and they all just get away with some bruises.

Then there’s the sword fight between Alejandro as Zorro and Elena. That’s just great.

The leads are really fun and match their roles well. The story moves at a nice clip for those who insist on quick pacing. It’s light-hearted and serious enough in a balanced way that never lets it get lost in either without losing sight of the other. It’s modern Hollywood evoking the best of classic populist Hollywood using modern techniques (well, for the late 90s). Ultimately, it just wants to entertain, and it does that extremely well.

2 thoughts on “The Mask of Zorro”