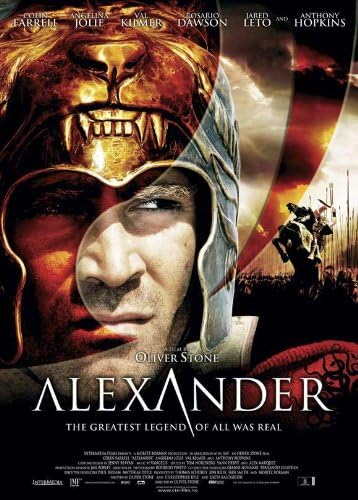 [Also see my reviews for The Theatrical Cut and The Director’s Cut.]

Yes, Oliver Stone’s third cut improves Alexander. No, it’s not suddenly some misunderstood masterpiece waiting for rediscovery. It’s still a bad film, just not quite as bad as the other two previous cuts.

There are changes throughout the movie, and the most obvious change is Stone’s commitment to his idea that Alexander’s youth and his conquest of Asia should be told concurrently. This execution is ultimately a very mixed bag with cuts that feel either really thin or completely unrelated alongside some others that highlight some interesting comparisons or contrasts here or there. The film is also more than thirty minutes longer than the previous cuts, but there is no single added sequence that sustains that. It’s all a series of small additions here and there, mostly around the Persian boy slave that Alexander takes with him to India. He also rearranged one particular sequence that, in my opinion, made that sequence a whole lot better.

Like the Director’s Cut, the movie goes from the death of Alexander to Ptolemy narrating, but it then breaks and jumps straight into the Battle of Gaugamela. This is a flabbergasting decision on my part, not because a story of Alexander’s conquest of Asia can’t begin at Gaugamela (I would have personally started it in Egypt as he’s crowned Pharaoh), but because the movie wasn’t filmed for it. Our first clear visual look of Alexander in the movie is kind of great, with him on a high rise looking out over the armies as a battle commander, but we then cut to him mid-explanation of the battle plans. It was fine in the Theatrical Cut when the segue worked from his youth to that point, well, it worked well enough, but this is the first time we hear him talk and he’s halfway through an emotional explanation of his plans. It’s jarring at best.

It jumps back to Alexander’s time with Olympias and Philip’s drunken attempt to force her into sex that started the main story in the other cuts, but the jump feels weird at best. There is an ultimate point to it, mirroring Alexander’s defeat of Darius with his victory in taming Bucephalus, which is kind of interesting, but I don’t think it outweighs the awkwardness of the cut. However, how this sequence ends and what it feeds into is the best single cut in the new edition of the film. We watch the scene where Philip explains the myths to Alexander in the caves below Pella, with much talk of glory and myth, and cut right to Alexander marching into Babylon in glorious fashion. That edit might be the best part of the movie. Unfortunately, what follows is the same awkwardly filmed scene of Colin Farrell not quite fitting the role and extreme closeups that minimize the effect of the large sets as we saw in the previous two cuts of the film. See? There’s only so much that can be improved by this cut.

The other major additive this cut has is the rearrangement of the wedding between Alexander and Roxana. In the previous two versions, we watch the sequence and it feels random. There’s Roxana’s dance, an argument between Alexander and his generals, the wedding, and then the wedding night. It makes the decision feel like it’s purely driven by sexual urges and there’s no real build to the sequence. In this new cut, we see the wedding first, then the argument, then the dance, and then the wedding night. It’s a much better sequence of events that gives everything a build towards a climax, so to speak.

The movie underneath the structural changes is the same flawed, way too tightly filmed, and weirdly performed mess of a film. The changes make some interesting choices, but they can’t save the film in the least. I’ve read a lot and watched a lot about the making of this movie, including a long interview with the director of photography, Rodrigo Prieto, and it’s obvious that so much effort and love went into the film. Stone had a story he didn’t know how to tell, but he was going to make his best effort to tell it.

After three cuts, I think it’s safe to say that Oliver Stone’s ambition was simply too great for his talents. Yes, fortune favors the bold, but that doesn’t mean the bold always succeed.

Alexander is a bad film, and no amount of tinkering around the edges was going to fix that.

3 thoughts on “Alexander (The Final Cut)”