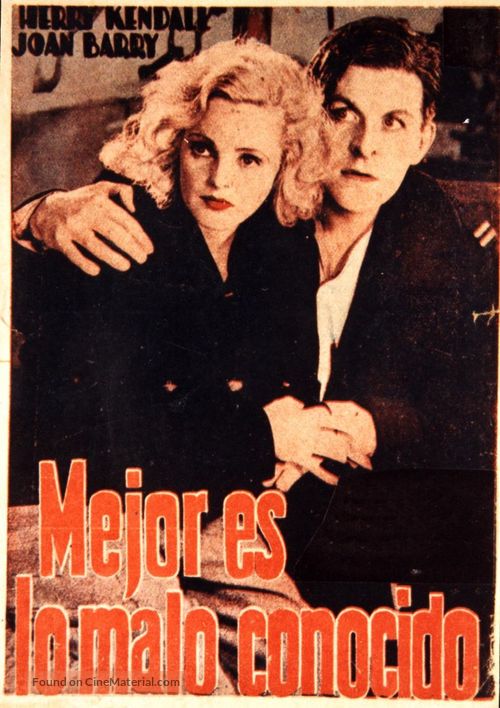 #41 in my Ranking of Alfred Hitchcock’s films.

This is not a movie interested in spending a whole lot of time setting things up, but once that spare setup is done, it turns into a surprisingly strong character drama. It’s also got a sense of humor that occasionally steps on its own toes dramatically before ending the film rather abruptly. It’s the in between part where the movie works best, where it takes its characters seriously and manages to convincingly put them through the wringer.

The opening minutes of the film were obviously filmed silent as we watch Fred Hill come back home from his menial job working the books in a row of others, struggle with his umbrella, deal with the motion of the subway car, and finally get his umbrella to open at his doorstep. He walks into his house to find his wife, Emily, working on a new dress for herself. Now, this opening scene ends up feeling front-loaded with information and doesn’t function well enough as introductions to our characters as people. Fred talks very bluntly about his complaints of their life. Sure, he can afford a roof over his head, but Emily deserves more, and gosh wouldn’t it be swell if he could just go off and travel the world instead of work. Emily’s happy with their existence, it being comfortable enough for the pair of them. Well, the mail comes and an uncle gives Fred his inheritance early so that Fred can travel. That was convenient.

Aside from the silent opening (which is actually rather amusing), I’m not a big fan of how Rich and Strange (the film’s original title) begins. It’s once they get onto the steamer that takes them from England into the Mediterranean that the movie actually feels like it begins to work. In a similar setup to Champagne, Fred stays below deck with sea sickness while Emily acclimates very quickly while meeting another man, Gordon, with whom she immediately strikes up a rapport. After a few days, Fred acclimates to life on board and gets out of bed finding that Emily is happily talking to Gordon all of the time and that a princess traveling aboard is surprisingly attracted to Fred. The married couple grow further and further apart as the steamer stops in Africa and then continues on to the Far East to the point that when they reach Singapore. With some reveals and the acknowledgement that their love still exists, Fred and Emily use the last of their cash to make it home.

The final major part of the film watches them deal with the sinking of their tram steamer and hitching a ride with a Chinese fishing boat. The end up at home and immediately begin bickering again in a moment that felt off to me.

The sections in the middle of the film from the introduction of Gordon to Fred and Emily’s coming back together where the film works best. The allure of the new people feels like it would appeal to the couple (Gordon is older and more mature than Fred while the princess exudes more sex appeal than Emily), and the disillusionment that the couple feels and then gets over works rather nicely. I have issues with how the movie tries to be funny, though, because it all feels rather forced, especially from the Old Maid character, a woman on the boat who’s butting into every situation and demanding attention. She’s supposed to be consistently funny, but I found her contributions flat.

I’d like to note that this is the first sound picture that Alfred Hitchcock made where both the sound feels like a natural part of the story telling and it’s not a staged play. The closest he came before this was in The Skin Game, which I consider a better film, however the openness of Rich and Strange combined with the more natural and assured use of sound makes it feel like this is the first time Hitchcock grew as a director since the advent of the sound era.

Overall, it’s a fine little film that undermines itself from time to time with forced comedy and bookends that don’t feel quite right. There’s something there, but Hitchcock’s not quite where he needs to be just yet.

1 thought on “Rich and Strange (or East of Shanghai)”