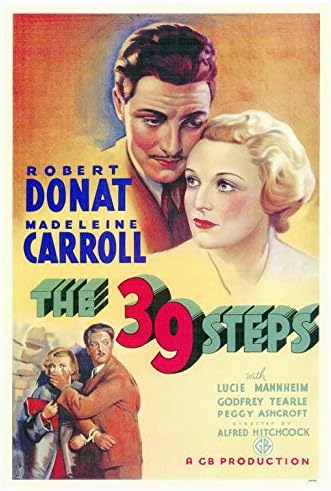 #5 in my Ranking of Alfred Hitchcock’s films.

Here is Alfred Hitchcock’s first complete success. After the jolt that was the advent of the sound era the cinematic language that Hitchcock and other silent directors had spent decades establishing and then lost with the new technical limitations that sound filmmaking imposed on them, Hitchcock has been able to marry the new technologies to his old aesthetics in a complete package of thrilling entertainment. The Man Who Knew Too Much was mostly there, held back by an awkward silent sequence that started the film and a final shootout that didn’t quite feel right narratively, but The 39 Steps advances the use of sound and makes the entire adventure rollick through its twists and turns towards its conclusion. It has a wholeness that was slightly missing in Hitchcock’s previous feature.

Richard Hannay, a Canadian, is in London and takes in a Vaudeville show featuring a memory man named Dr. Memory. There’s a shot, everyone leaves in a panic, and Hannay ends up taking an attractive woman home with him. She talks about foreign agents in Britain, a secret airplane design, a contact in Scotland, and an enemy missing the end of his little finger. She gets stabbed in the back in the middle of the night, leaving Hannay the prime suspect in the crime, and he’s off to Scotland to try and find out what conspiracy he had just fallen into.

One of the joys of the film overall is Robert Donat as Hannay moving from one situation to the next, trying to figure out ways to get out of the newest jam that he’s fallen into. He moves from the train to Scotland to the Forth Bridge to a small farmhouse with a jealous husband and young, attractive wife to the house of the enemy (Professor Jordan) to a political rally to police custody, and on and on. It’s a whirlwind of activity and it’s all grounded by Donat. He’s just the right mix of earnest and detached, eager to see good done and with a certain ironic air about him at the same time. It’s what gives him the aloofness to walk into a political meeting, see the situation he’s been placed into through confusion on the part of the organizers, and take advantage of it by using the rally as a shield from his pursuers, even if it’s a temporary one. It helps that Hannay’s improvised speech is the right kind of empty pablum and self-effacing mockery that’s just a joy to watch. It’s my favorite part of the movie.

Eventually, surprisingly late into the film actually, Hannay picks up Pamela, a woman he accosted on the train in a failed effort to flee the police. She points him out at the political rally and gets carried away by the police who end up not being police. Hannay and Pamela are handcuffed together and Hannay forces her over the Scottish moors. The banter and rapport between the two main stars is so easy and natural, that it carries the movie the rest of the way, through the final stages of the adventure that take them all the way back to London and Mr. Memory.

Much like The Man Who Knew Too Much, there’s a lot of plot, of moving characters from one place to the next, and of intrigue, and it all works because of the characters themselves. Donat is wonderful as the man caught up in a plot he cannot understand as he struggles to work his way out of it. Madeleine Carroll is alternatively strong and wilted as Pamela, going from stern antagonist to Hannay to willing accomplice at a key point. Through these two characters, we uncover clues that advance the plot all the while feeling like the characters are making natural decisions rather than doing things dictated by the script just to keep the movie going forward.

This was the most expensive movie Britain had made up to that point (a whole sixty-thousand pounds sterling), and it actually shows. The sets are large and intricate, even using some indoor sets for outdoor night locations that end up feeling quite convincing. The action never feels confined to a single space, free to keep the characters on the move and active.

The whole experience is a wonderful adventure, well told, and with a winning pair of central characters to carry the audience through with. It’s easily Hitchcock’s best movie up to this point, where the technical and narrative elements came together and meshed perfectly. It’s a great time at the movies.