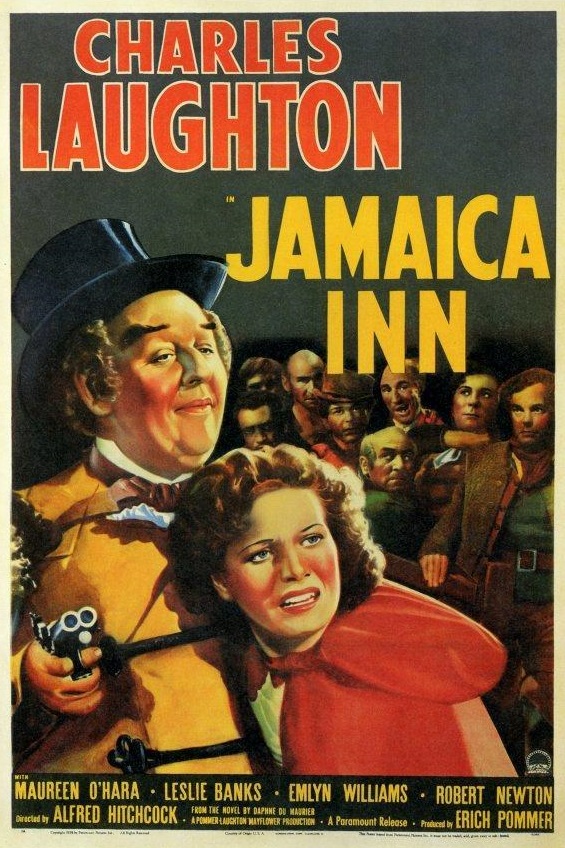 #34 in my Ranking of Alfred Hitchcock’s films.

This movie’s reputation is surprisingly bad. Having never read the source book, I can imagine the complaints fans of Daphne du Maurier’s text. Characters who seem like they should be central get less screen time than they really should. I imagine there are changes all over the place. However, watching the film decades after it’s been labeled as one of Hitchcock’s worst films, I’m left a bit confused because when I watched it I saw a slight but entertainingly dark thriller. It’s certainly not his best work, but it’s very far from his worst.

That being said, there are definitely some changes that I know of that make some of the later sequences less thrilling than they could have been, and that’s entirely around the change to the central villain. It’s not that they changed the minister to a squire that’s the problem, it’s that Charles Laughton, as producer and actor, demanded more screen time which led to bringing out the fact that he’s the villain within the first twenty minutes. What this does to a later sequence is change the nature of the tension, downgrading it a bit. We know he’s a double dealer, so the question isn’t about whether he and the undercover lawman will get caught, but when the squire Sir Humphrey will turn on him. I think the sequence would have worked better if that’s where we learned that Sir Humphrey was a bad man at the moment that he points his gun at the lawman’s back. That shot seems designed to be the big reveal for the audience, twisting the entire sequence at that point and changing the nature of everything from that point on. As the movie stands, the sequence is still pretty good, but the above changes, I think, would have propelled it upwards.

The story is that in the early 19th century on the Cornish coast, which is largely lawless, a group of marauders block out signal lights in order to encourage passing ships to crash into the shore, leading to killings and pillage. The gang is led by Joss who is married to Patience. Patience’s niece, newly arrived from Ireland after the death of her mother, shows up to live without any idea the company she is going to keep. Her first night, she witnesses the gang turn on a member and hang him which she manages to save him from. They run off to Sir Humphrey who takes them under his wing with promises of safety and action against the gang when the member, John, reveals that he’s an undercover lawman. Thus begins the big sequence I wrote about earlier.

I perused some negative reviews of Jamaica Inn after watching it, wondering what it was about the film that turned so many people off, and it seems to be the early reveals, especially around the nature of Sir Humphrey’s evilness, Laughton’s large performance, and changes from the novel. I’ve explained why I think the early reveal does the film no favors but that the film still does manage some suspense, and I can’t really argue with Laughton’s performance. He’s big and a bit out of place in something that feels like it should have been a bit more subtle, and then changes from source material I always find to be silly criticisms without much worth.

It’s far from a great film, but I do think there’s enough that goes right in the film that it comes together as a rather entertaining little movie. We even get touches of Hitchcock that feel very comfortable in his oeuvre like a bit of voyeurism (as Mary watches John’s hanging) and suspense (the aforementioned sequence at the inn) even if the movie as a whole (a period piece with an out of control central actor who really should have been more at the side) doesn’t. It’s pretty good, but there’s a lot floating around that seems intent on not letting it work as well.