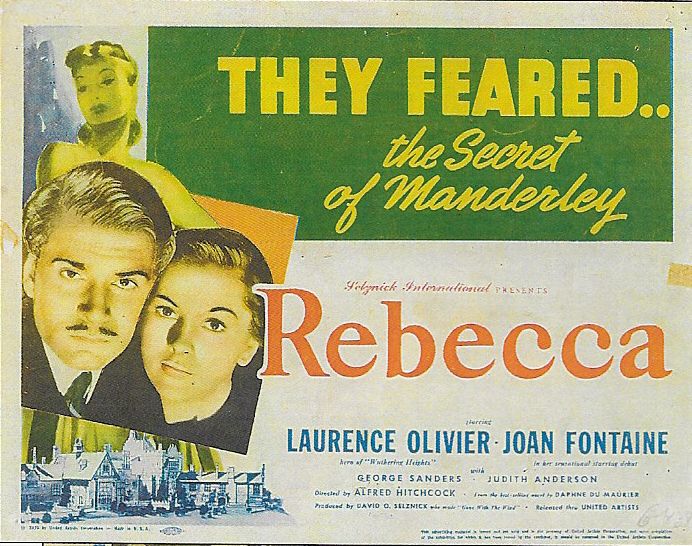 #7 in my Ranking of Alfred Hitchcock’s films.

So, Alfred Hitchcock traded an out of control actor/producer in Charles Laughton for just an out of control producer in David O. Selznick. That honestly feels like a step in the right direction. Instead of having an egomaniac try to dictate Hitchcock’s own movie to him on set, he only had the egomaniac on the phone and in the editing booth. Reading about Hitchcock up to this point in the timeline of his filmography, this is the first time I’ve seen his editing in the camera technique mentioned where he only shot exactly what he needed to edit together. So, he didn’t have entire scenes playing out across multiple takes, instead he shot what he needed from a particular actor in an exchange at a particular angle and stopped filming. I have to imagine that this was a technique that he developed while working in the studio system in Britain where he had to be as economical as possible. It had the added advantage of preventing Selznick from completely remaking the film in the editing bay. So, despite the stories of how much Selznick wanted to mess with the film, Hitchcock made the film in a way that only minimal messing could happen.

Anyway, the film is based on another Daphne du Maurier novel after Hitchcock adapted her Jamaica Inn as his last British picture. This is apparently a much more faithful adaptation of du Maurier’s work than the previous film. A young woman is attending Ms. Van Hopper as a paid companion in Monte Carlo when the pair meet the mysterious and very wealthy Maxim de Winter. Ms. Van Hopper, a rather tiresome socialite well past her prime, desperately tries to latch onto Maxim, but the young attendant effortlessly falls into his arms romantically, and the romance blossoms into a quick marriage. The real joy of Ms. Van Hopper is how she quickly morphs from a tiresome bother into a woman of experience as she tells the new Mrs. de Winter that she’s entering a world that she does not understand.

At Mr. de Winter’s residence in Cornwall, Manderley, a gothic mansion on the coast of England, the new Mrs. de Winter meets the house’s staff, in particular Mrs. Danvers, the housekeeper. This is where it becomes apparent that this is a ghost story. The former Mrs. de Winter, Rebecca, is mentioned in almost every scene. Everyone seems haunted by the mysterious presence of her a year after her disappearance and death, but her former presence affects different people in different ways.

Maxim can’t bear to hear her name or be reminded of her, and he won’t talk about her, leaving his feelings a mystery. Mrs. Danvers, on the other hand, treats Rebecca’s name with the utmost reverence. When the new Mrs. de Winter finds her way into Rebecca’s old room, Mrs. Danvers touches Rebecca’s things like they are holy objects, her brush and pillow case (embroidered with an R) in particular. Mrs. Danvers goes so far as to encourage the new Mrs. de Winter to wear a dress that Rebecca wore to a dress up party a year before in an effort to drive a wedge between her and Maxim.

Eventually, Maxim reveals the true past of his relationship to Rebecca and his role in her disappearance to his new bride, a terrible secret that weighs on him heavily and could turn into serious consequences if found out by the right people such as the local sheriff or George Sanders, Rebecca’s cousin and lover.

What sets this movie apart from everything Hitchcock made up to this point is the maturity. From the basic approach to actors and their performances to framing and to emotion, Rebecca doesn’t feel like the work of a man who’s most successful movies have been adventure yarns about shadowy organizations doing shadowy things for shadowy reasons. This is a character drama that uses Hitchcock’s entire array of technical skills and also manages to fit in thematically while finding places for his telltale sense of suspense. The way the truth gets doled out steadily over time, with questions lingering about motive and desire for main characters with the new Mrs. de Winter as our point of view into this strange little world, is all about building suspense towards the central questions at hand (something that honestly, despite my defense of the film, should have been in Jamaica Inn).

The only thing that I have some small reticence over is the final fifteen minutes or so of the film when everything gets revealed. For what it is, a series of reveals that the movie actually did build up towards, it works and has a certain appeal, but it feels more banal than the more Romantic and Gothic film that had preceded it. Again, it’s not a bad series of reveals, it just doesn’t feel like it quite fits. The final images of the film, though, do fit wonderfully well as the ghost of Rebecca burns away in visual metaphor.

This is a sort of greatness that Hitchcock, up to this point, hadn’t really been working towards. The films that were meant to be taken more seriously, like Juno and the Paycock and The Skin Game felt as much like quick solutions to the question of talkies from a producer perspective than anything else, and, while The Skin Game is a successful film, it always felt limited visually (due to a few outside reasons Hitchcock had no control over). Working from novels, with greater inherent scope than stage plays, feels like a more natural fit for film in general, and Hitchcock fills the frame really well to fit the story. So, despite some lingering, limited questions of authorship between Hitchcock and Selznick, this does represent a reinvigorated Hitchcock in his new Hollywood home.