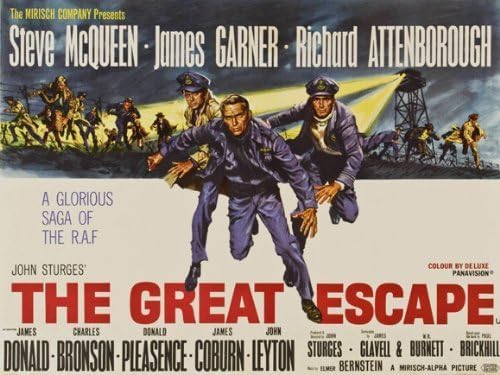 One of the great adventure movies is about an escape from a German POW camp in the middle of World War II where most of the characters end up dead, murdered by the SS. Fun, right?

It’s both a great irony and a testament to John Sturges’ sure hand on the material that a story so inherently depressing doesn’t come off that way. That the tone of the film manages to move from one extreme to another without feeling like whiplash is kind of amazing, and I think it all has to do with the general approach to the material that gets established from the beginning. The first twenty minutes or so establishes a sense of danger for the situation at the prison camp as a whole but populates it with a bevy of characters who refuse to be defeated. They’re looking for ways out the second the arrive, scoping out blind spots on the wire that surrounds the camp, sneaking into a group of Russian prisoners that are being moved out, and jumping into trucks filled with the last of tree branches from the surrounding forest in an effort to escape. It’s that spirit of determinism and refusal to bow to the reality at hand that they are trapped in a cage for the duration of the war that makes the movie work as well as it does in the face of the grim realities that it presents.

The movie revolves around one concentrated attempt at escape in a prisoner of war camp, built exclusively to hold the most notorious of prisoners who have repeated escapes on their record, putting all of Germany’s rotten eggs in one basket. The group of Brits, Australians, Scots, and Americans get roles to play from scrounging for supplies to forging to tailoring to tunneling. The tunneling is key, of course, because it represents the best way to get out two hundred fifty prisoners at once to confound the enemy from behind the lines, forcing them to dedicate resources away from the front lines.

The task pits two intelligent adversaries against each other, and milling throughout are a series of personalities that play their parts in one capacity or another. It’s a men on a mission film where the mission is to escape and confound, not to destroy a particular objective or win the war. With that in mind, the movie’s resolution, where it ends with the murder of fifty escaped prisoners of war by the Nazi regime, tired of the efforts to keep these men caged, the movie’s overall effect and tone suddenly make more sense. Escape back home wasn’t the primary goal, winning a small battle over the Nazis to get them to redirect resources was.

The joys of the film really come from the characters and actors, though. The three-hour film has a lot of time to fill in telling this specific, really focused story, and in order to inform each scene with more than just a plot based reason for existence, characters end up feeling alive as they work with each other and sometimes against each other in pursuit of their mutual goals. James Garner, Richard Attenborough, Charles Bronson, Donald Pleasence, James Donald, and in particular Steve McQueen bring appropriate ease, suave, or gravitas to their roles. McQueen’s role as Hilts is obviously the one most people remember, for it was what turned McQueen into a super star, but it’s Pleasence as Blythe, the Forger, that I’ve always loved the most. His sad fall into complete reliance on James Garner’s Hendley, the Scrounger, has always felt like the most emotionally touching part of the film.

John Sturges has a very strong handle on the material, having nursed it in his mind based on the source material, an account written by a former prisoner of war of the real Great Escape. He manages to balance the bevy of characters, giving each one time to feel unique and alive on their own, while also keeping all major aspects of the escape plan in clear view. The fact that there is no one large portion of the escape that feels unexplained all while the movie is able to never feel bogged down in the details is a testament to how assured a hand Sturges had on the film. And, of course, there should be mention of Elmer Bernstein whose score compliments the film so wonderfully while being a fun piece of music on its own.

The Great Escape is a grand adventure that remains emotional genuine in the face of a lot of fictionalization of events. It keeps its feel of fun adventure while balancing it against the real tragedy that ends the film deftly. It’s a classic for a reason.

2 thoughts on “The Great Escape”