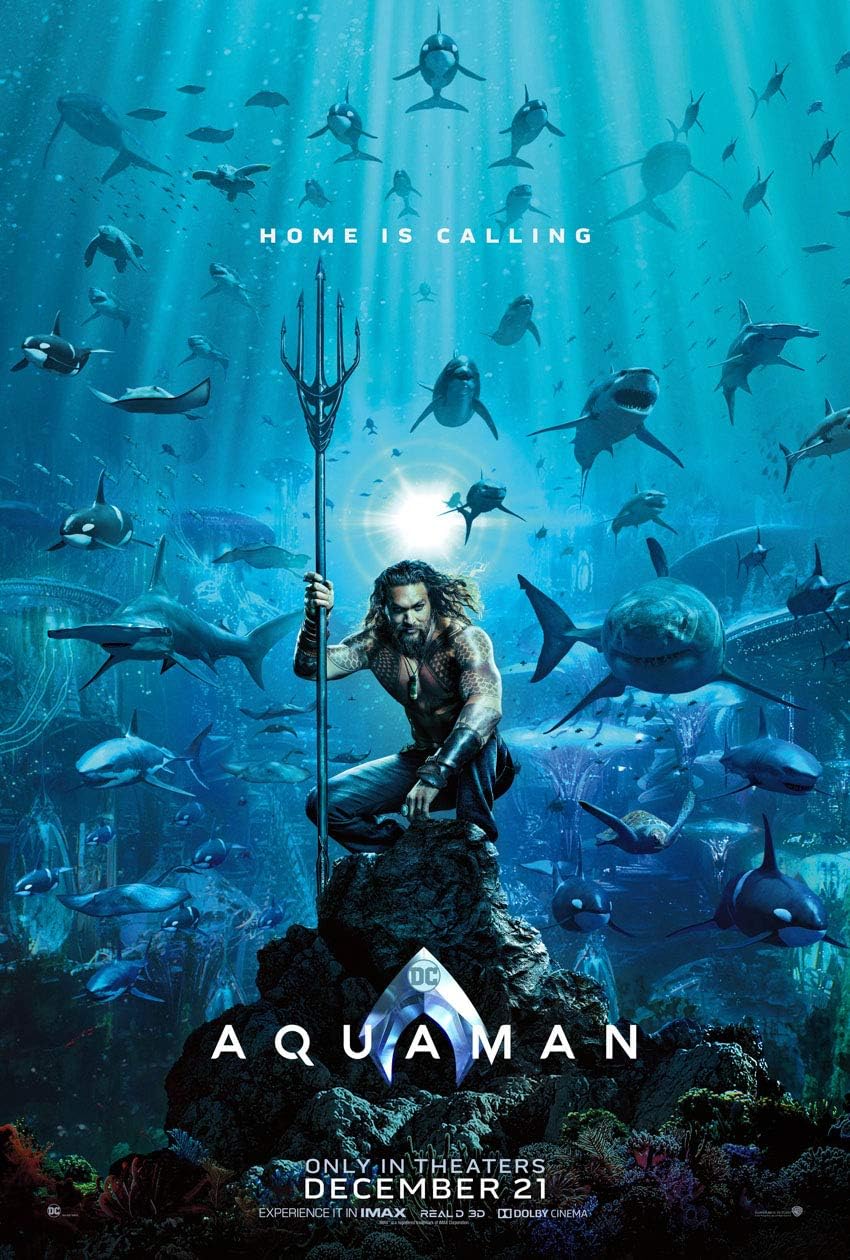 #7 in my ranking of the DCEU franchise.

I’ll have to write through the DCEU at some point, but I guess I’m starting here. I’m one of those weird people that really likes Zack Snyder’s take on the Superman and Batman stories. There’s real cinematic ambition at work there, and while its reach may exceed its grasp, it tries to be mythic in scope. James Wan’s Aquaman is a very different animal. It’s certainly big and obviously very expensive, but the film feels smaller, and its not the stakes at play. Also, it seems obvious that Wan’s time making mediocre popcorn horror films have not taught him the ins and outs of how to build a story.

Looking through some positive reviews of the film I see some common themes. There’s a lot of praise for the visuals, the special effects, the action, and the humor. Well, the movie certainly very often looks quite expensive and it sometimes does look pretty good (especially the Trench attack late in the film), but this is mostly praise for a film’s ability to hire hundreds of visual effects artists more than anything else. A lot of this is to do with the movie’s poor world building.

The story first, though. Arthur Curry is the son of the queen of Atlantis and some guy who lives in a house by the sea in New England. Being the son of the queen of Atlantis, he has special water powers like breathing underwater and swimming really fast and, apparently, being just this side of invincible. After his mother gets torn from him at a very young age, Nuidis, the vizier from Atlantis, comes and trains him for years in short little scenes that don’t even amount to a training montage. After the events of Justice League, Arthur is somewhat responsible for the death of a pirate, leaving the pirate’s son itching for murder. In the middle of the ocean, Orm, Arthur’s half-brother from their mother and another Atlantian, is consolidating power to become the Ocean Master and wage war on the surface. This doesn’t sit well with Nuidis or Mera, Orm’s betrothed and daughter to another of the sea kings. They go off to recruit Arthur to challenge Orm and become King of Atlantis.

So, when this movie isn’t giving us really expensive special effects shots of submarines, giant seahorses, and vibrantly colored underwater cities, it’s giving us really boring scenes where people with names we cannot remember explain things to other people with names we cannot remember. In most movies, these would be done in bland environments, but in Aquaman, they’re done in, well, bland environments with some thin layers of water effects around them. Seriously, most of the world building in this film is Orm flatly explaining to people his plan to consolidate power without giving us a clear view of who in Earth he’s talking about.

Then, for really inexplicable reasons, the movie decides to become an Indiana Jones knockoff for about forty minutes where Arthur and Mera have to take a thing to a place where they get another thing which they have to take to another place which directs them to another place and finally directs them to the Trench, one of the seven kingdoms under the sea. This is where the funny is supposed to come in, but like pretty much every scene in the film, nothing here feels fleshed out enough to carry any amount of character beyond some quick quips (which, of course, means that Arthur and Mera are going to totally fall in love by the end). I would say it’s an excuse to get them out of the way of Orm so that Orm can consolidate more power while they’re away, but they end up trapped in the Trench with no escape at one point. Instead of having a forty minute and unsatisfying Indiana Jones knockoff, they could have given us twenty minutes of the pair trying to find a way out, getting to know each other, and then finding the surprise guest near the end.

For a movie that’s a hundred and sixty minutes long, it does feel shockingly short in some ways, and that’s because it doesn’t spend any time with any single scene beyond those that demand lots of special effects, like fights. It’s paced very quickly, and that ends up being a bad thing because it makes the film very thin where character interactions feel perfunctory rather than meaningful.

And, the special effects. Again, this movie very often looks expensive, but it only occasionally looks good. The approach to the Trench, when Arthur and Mera have to jump from their rinky dink boat and into the water (why two creatures that can swim much faster than a small boat can putter along actually take the boat, I do not know) actually looks really striking as Arthur holds out a series of flares that lights them and the swarm of creatures trying to get to them that surrounds them. However, the flight through Atlantis offers a good counterpoint. It’s full of colors and it looks like a team of digital artists spent hundreds of hours each on every little detail to bring it out, but it ends up feeling flat because we don’t get any sense of what anything we’re seeing is. This is where some actual world building would have benefited the film, allowing us time to explore Atlantis a bit with Arthur as our eye and ears into this new world, learning about what’s going on in this fantastic city. Instead, they quickly move to a sunken ship where they hide away from the special effects and then have a fight.

I really did not like this movie. It’s thin with little focus and an almost complete inability to tell a story. I imagine it’s not going to age particularly well for those who were blown away by it on their first viewing.