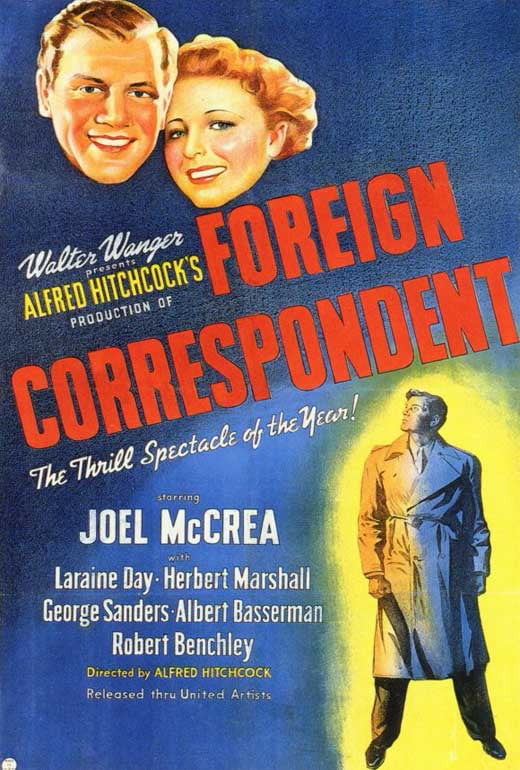 #31 in my Ranking of Alfred Hitchcock’s films.

On the whole, this is an entertaining globe trotting adventure with a winning pair of leads, however I do have some issues that feel like would have been easy enough to fix and drag the film down a bit. Reading the background of the film’s production highlights some of the challenges in making a cohesive picture considering the challenges Hitchcock faced when Selznick loaned him out to Walter Wagner who wanted an up to the minute topical adventure film that reflected the reality of the European situation up to then. Which was a challenge, of course, because of the natural lag between production and release.

The story is that a New York newspaper, the Globe, wants a real reporter in Europe to figure out the story of the European situation because his current crop of foreign correspondents are doing little more than forwarding official messages back to the paper. He grabs John Jones, a hard nosed beat reporter, gives him a new name (Huntley Haverstock) and a ticket to England to try and track down the Dutch diplomat Van Meer. Jones shares a cab with Van Meer on the way to a luncheon and then meets Carol Fisher, the daughter of one of the organizers of the luncheon and leaders of the peace movement to prevent war. I can understand Jones being smitten with Carol. She’s pretty and spunky. However, especially considering how utterly annoying Jones demonstrates that newfound affection (through a long series of notes over the course of the luncheon) and then climbing into her hotel room (with good reason, that is), Carol’s sudden admission of deep felt love for Jones feels out of nowhere and unsupported. It annoys me.

Anyway, to continue the story, Van Meer doesn’t actually show up for the luncheon despite being in the cab with Jones. The action moves to Amsterdam and another peace party event where Van Meer shows up, doesn’t recognize Jones, and then immediately gets shot in the face. This is the movie at its height. One man (joined by Carol and another reporter ffolliott) goes on a chase and enters into a conspiracy that he does not understand but needs to find out. Left alone at a windmill, Jones goes up and down, in and out of the windmill finding some of the players involved in the conspiracy, and it’s a marvelously tense sequence as he just keeps out of sight. The set design is impeccable with a two story structure, an array of large gears constantly in motion, large beams that cast large shadows, all for Jones to weave through to try and find the secret hidden within.

The next section drags a bit, I think, as Jones and Carol (along with ffolliott) make it back to London where we discover some untoward things about Carol’s father. It feels more like a first act than a second act as it works towards a nice little sequence at the top of the Catholic Cathedral in London at Westminster. Nothing in this section of the movie is really bad or anything, it just feels a bit too lackadaisical. Instead of building overall tension, it seems to have relieved it completely and is starting from scratch.

Now, for the MacGuffin. The specifics of MacGuffins don’t actually matter that much. All that matters is the characters’ desire to acquire it. Probably the most amusing of MacGuffins in Hitchcock’s filmography is in North by Northwest where Leo G. Carroll calmly explains to Cary Grant that the bad guy has unspecified secrets. The specifics don’t matter, just that he has them. That would have been a better way to go in Foreign Correspondent because once the specifics of the MacGuffin come out, it’s ridiculous. Two countries entered into a treaty with a secret, unwritten, clause that only the two ambassadors knew about and memorized. How, on Earth, is that supposed to work? Which of the two countries actually entered into the agreement in that secret clause that no one else knows about? Which king of parliament agreed to it? How is it binding at all? It’s not that it doesn’t make sense from a reality point of view but it doesn’t make any sense at all, and this is the lynchpin that holds the movie together. Better to hide the lynchpin from view a bit more.

Overall, it’s an entertaining adventure through pre-war Europe, ending with an incredibly well executed plane crash in the middle of the Atlantic Ocean, I just wish the romance was less awful, the second act was tighter, and the MacGuffin made more sense. It’s Hitchcock’s first attempt to recapture the magic of The 39 Steps since coming to Hollywood , and he almost gets there. He crafted an entertaining but loose adventure that’s as up to date as possible.