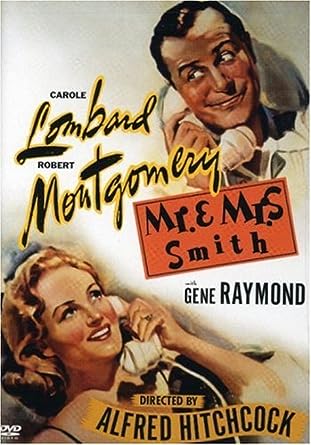 #35 in my Ranking of Alfred Hitchcock’s films.

This is very much not a Hitchcock movie. He didn’t have any hand in writing it, and apparently Carole Lombard pushed him around a bit on set while she had championed the concept to production to begin with. It’s a bit of a sore thumb that way in Hitchcock’s filmography in that it doesn’t seem to fit in a body of work that feels surprisingly cohesive over such a long period of time, but it doesn’t do anything to affect the relative positive or negative aspects of the film. It’s just an interesting footnote to the film itself.

The story is that a happily married New York couple discover that their marriage was never legal based on some rigmarole from the small country out West where they were married. They need to get remarried again in order to undo it, though they did get their two dollar marriage license fee back, which was nice. The thing about this married couple is that when they have a fight, they have to seclude themselves in their bedrooms for days at a time until they straighten things out. Their record was eight days and, as the movie begins, they are at the tail end of a three day spree like this. So, we see them happy in their first moments, but it’s at the very end of a three day long fight that just ended. The implication is that the only way their marriage can work is if they completely close off the rest of the world and spend all of their time letting their fights take their courses.

Well, this unmarriage situation throws in a wrench, especially when David doesn’t propose fast enough to Ann after they both find out. She’s furious, especially after he had said right after their last fight that he would not marry her if he could go back in time, and she kicks him out. Suddenly, they don’t have their routine to work through their problems, and things spiral out of control. He spends several nights in his gentleman’s club, wiling away the hours in the sauna, while she first hires David’s legal partner to represent her and then starts seeing him as well. Things keep going out of control as Ann gets engaged while David struggles to find a way out of his predicament of losing his wife to his law partner.

The resolution of everything feels both underdone and really well structured, oddly enough. Ann leaving her new beau feels underdeveloped, but the way Ann keeps herself in the remote cabin that she suddenly finds herself with David in fits right in with how the movie began.

My only real problem with the film is that it’s not as funny as it could be. There is certainly funny stuff in there. My favorite funny bit is the scene after Ann’s first date and Gene Raymond as Jeff, the law partner, very suddenly gets very drunk based on Ann’s at home treatment for colds (two very large helpings of liquor). The physical performance from Raymond subtly moves from totally in control sober to barely in control blackout drunk with a bobbing head, repeated simple lines, and a walk deserving of the Ministry. However, outside of that, this comedy is largely amusing without being really funny. It helps that the dramatic bits are well constructed.

So, it’s a minor work and the rare piece from Hitchcock in Hollywood where he was literally just a hired hand. It’s almost a throwback to his earliest days at British International Pictures (reminding me a bit of The Farmer’s Wife). It’s breezily entertaining and amusing, which is just fine with me.