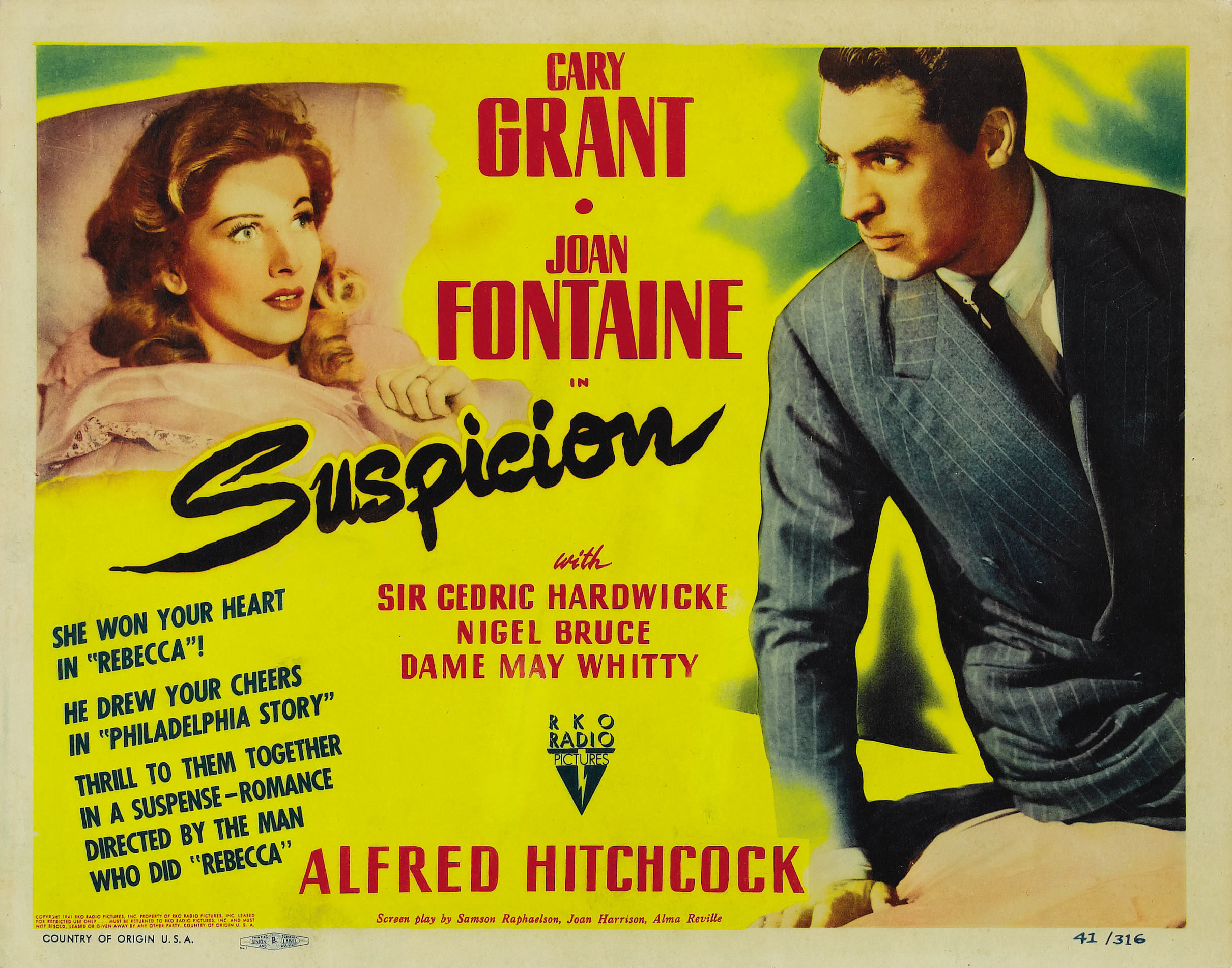 #11 in my Ranking of Alfred Hitchcock’s films.

This movie is almost entirely built on performance, a gentle balance between Cary Grant exuding enigmatic charm, easy duplicitousness, and barely concealed malice, often within the same scene. The audience is set to interpret the variations in how he presents himself along with Joan Fontaine, our heroine. It’s a journey that starts as a rather simple romance and steadily turns more and more sinister as we, along with Fontaine, lose our grip with what could be real and what could be just a figment of our imagination.

Fontaine plays Lina, a woman and daughter of a reasonably wealthy family getting close to entering the stage of a spinster. On a train from London one day, she meets the enigmatic and charming Johnnie Aysgarth, a perennial presence in the London tabloids as a man about town. He finds an immediate attachment to her, but the woman who has never had a successful romance doesn’t quite know what to do before letting her imagination take over for her and falling madly in love with a man she barely knows. Now, in Foreign Correspondent I considered the very quick romance between the two stars to be thin and based on just this side of nothing. Suspicion seems to share some of these faults, but it actually uses the situation a whole lot better. We never get a firm grasp on Johnnie as a man, being so slippery and prone to straight up lying, and on the other hand Lina is so inexperienced in love that her falling for a slippery but charming man of some fame makes sense. It also helps that the point of the film is the fact that she doesn’t know him very well.

Anyway, it turns out that Johnnie is not some rich social creature but a constantly penniless man always on the lookout for a new way to pay for whatever bill he has in front of him at the moment. His look of despair as Lina tells him that her meager allowance from her father won’t pay for their outlandish lifestyle that he had set up while on their honeymoon shows Lina the first clue in that she’s married Johnnie far too quickly. What follows is Johnnie giving Lina a series of assurances on his honesty and trustworthiness while finding ways to create shortcuts. Lies get piled on top of each other left and right. He sells a pair of chairs her father had given them as a wedding present for a couple hundred pounds with a couple of different explanations. And then he comes home with two thousand pounds and stories of a great bet on the track, but she finds out that his employer had fired him weeks before for stealing two thousand pounds from him. When Lina confronts Johnnie about this, he slips through another explanation again.

Things turn outright sinister as Johnnie turns his sights on a possible real estate deal with a friend of his, Beaky, a large, good natured and simple man that Johnnie had known for years and has his own source of large income. Johnnie’s dishonesty has simply gotten too much for Lina to brush away and it seems that he’s becoming more and more desperate for cash, which could lead to what her imagination shows her could be murder, but the murder does not develop in the way she imagines and she seesaws, along with the audience back to thinking that Johnnie is just dishonest but not murderous.

Beaky dies when he goes to Paris, and it’s unclear whether Johnnie was there or not. From their house outside of London, Lina receives word of Beaky’s death, calls Johnnie’s club in London and discovers that he hadn’t been there since the morning before. There’s no accounting for his whereabouts and the Parisian waiter who witnessed Beaky’s death after a dare of a large snifter of brandy swears that there was an Englishman there with Beaky at the time. Lina feels like there’s no other explanation than Johnnie’s involvement, but she’s too passive to simply walk out. She has him drive her to her mother’s house after a great scene involving a glass of milk and implications of an undetectable poison, only for Johnnie to save her from falling out of the car as they drive next to a cliff. He provides some quick explanations for his actions, Lina’s satisfied, and they drive back home.

Now, the ending was the result of changes from the source novel dictated by the studio because Cary Grant couldn’t be the killer and we couldn’t see Joan Fontaine die, but if you actually pay attention to Johnnie’s behavior through the entire film, there’s no reason to actually believe his explanations and it leaves open some questions about his actions and whereabouts that never get answered. The consummate liar was suddenly telling the truth? Maybe, but unlikely.

A final note about the IMDb trivia page. On the trivia page for Suspicion, there’s this note:

“Sir Alfred Hitchcock wanted an ending similar to the climax of the novel, but the studio, more concerned with Cary Grant’s “heroic” image, insisted that it be changed. Writer Donald Spoto, in his biography of Hitchcock, “The Dark Side Of Genius”, disputes Hitchcock’s claim to have been overruled on the ending. Spoto claims that the first RKO treatment and memos between Hitchcock and the studio show that Hitchcock emphatically desired to make a movie about a woman’s fantasy life.”

I don’t see how a memo for the film written by Hitchcock saying that he wanted to make a movie about a woman’s fantasy life in any way at all invalidates the idea that Grant was the murderer. In one way, it could be that Hitchcock reimagined the story as one of a woman who imagines her husband to be a murderer and that’s it, but it also leans into the idea that the story is about a woman who fantasizes that her husband is not actually a murderer in the end. It just seems like a thin reed on which to hang the idea that Hitchcock simply gave up on his original desire to have Grant as the actual murderer. I think the actual solution, which was to give the audience the impression that Grant was innocent while building enough into the story so that he could be seen as guilty was Hitchcock playfully getting what he originally wanted past the studio without them realizing it.

In the end, though, the movie’s an intricately built, really well realized story of, well, suspicion. It’s exceedingly well acted, especially by Grant, and includes Hitchcock’s only Oscar winning role for an actor in Joan Fontaine’s performance as Lina. There’s tension that steadily builds over the entire film from beginning to end.