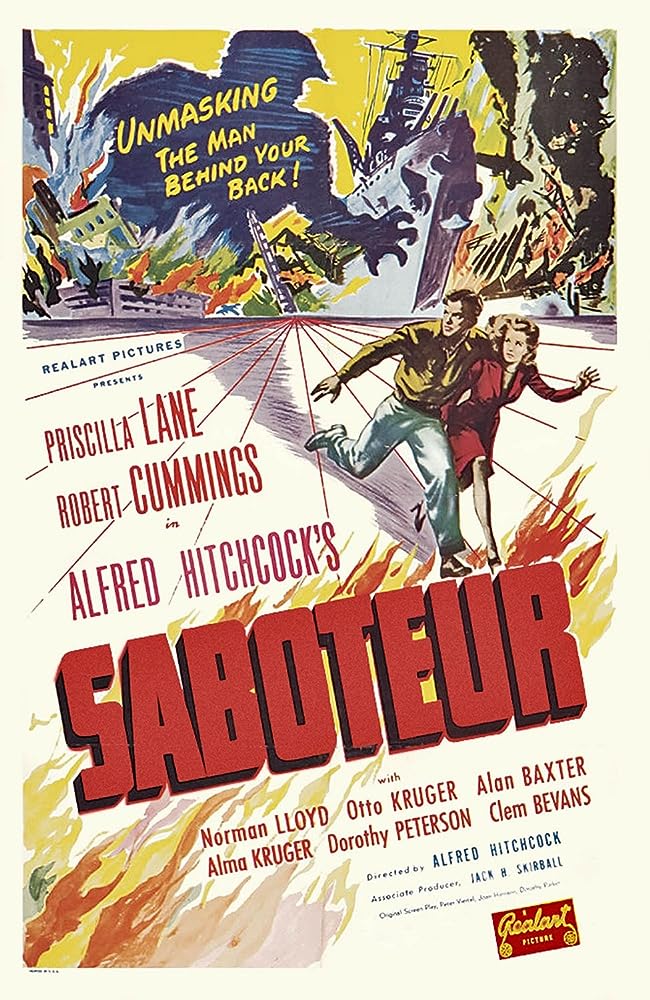 #17 in my Ranking of Alfred Hitchcock’s films.

Anyway, it’s war time and Barry Kane works in an airplane factory in Los Angeles. He meets a man named Fry just before a large fire breaks out and Barry gets fingered for the arson because of his proximity to a fire extinguisher filled with gasoline. Immediately, Barry is off on the run, eager to clear his name since no one seems to know who this Fry is, thinking that Barry created him to cover for his own guilt. All he has is the memory of an address on an envelope that Fry dropped, so he heads to a ranch in the middle of nowhere. On his way, he meets Charles Tobin who is in charge of the sabotage efforts, gets captured, handcuffed, then escapes to meet a kindly old blind man and his niece, Pamela. Pam turns on Barry, trying to turn him in, but Barry manages to take control of the car and drive them off towards Soda City, the next link in the chain.

All of this is pretty standard stuff, and it’s carried by Robert Cummings as Barry Kane well enough. He’s a fine actor, but he lacks the easy charm of someone like Robert Donat that helped elevate The 39 Steps. Priscilla Lane is much better as Pat, alternatively angry at having to chauffeur a saboteur and then warily falling for him as she gets to know him and the truth more. Her best moments are late in the film when she realizes the full truth of the matter and her emotions turn, convincingly, on a dime.

They mystery moves from Los Angeles to Soda City, a run down nothing of a small ghost town, to New York with ease. The character of Barry is smart, allowing him to find a way into the confidence of the sabotage ring to save himself for a time, using what little he knows to get as far as he can. That situation is the best source of tension as we watch Barry navigate through interactions knowing that any little slipup will give him away. That balance is what really drives a large section of the film as it drives towards its conclusion.

Fry, though, gets so completely forgotten that even the characters note that they had forgotten about him, so when he shows up late in the film without re-introduction, I actually thought of him as just another goon until I was reminded that he was Fry. That’s partially on me as a viewer, but when a character disappears for over an hour after not a lot of scree time and he’s not that particularly distinctive visually (by design, I’m sure), it seems like a bit much to ask of an audience to instantly recall the face. Another thing about the movie is that it is partially propaganda made during the war, so when people stop everything to opine on the cause, it almost always feels out of place at best. It doesn’t happen too often, but often enough to be a distraction.

Overall, it’s a fine adventure with a good enough lead, bogged down by some contemporary moralizing about a timely issue that doesn’t translate into drama as well as it could. It’s a fun time, a minor work from a director capable of much more.