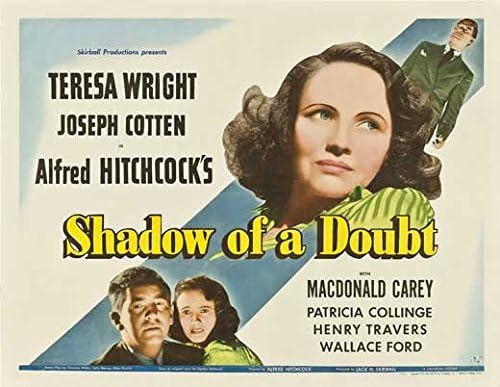 #3 in my Ranking of Alfred Hitchcock’s films.

There’s something extra sinister about this tale of lost innocence in a sleepy little California town. The dramatization and fictionalization of a real life killer takes what could have been completely standard tropes and twists them an extra degree or two by adding in an element of familial loyalty that makes the situation more than just another tale of grizzly murder. It helps that Joseph Cotton is just so great as Charlie Oakley, the alternatively charming and menacing uncle come to visit from the East.

At the heart of this story is the spoiling of a dream, of realizing that those you idolize are humans and not super beings, but it takes that rather normal realization that we all go through and goes even further. Charlie Newton, a young woman out of high school and still living at home with her parents and two younger siblings, is in a rut and decides that the best thing to fix everything that’s plaguing her would be a visit from her uncle, her namesake Charlie Oakley. At the same time, Charlie Oakley is alone in his small one room residence in a boarding house in Philadelphia. Outside are two men who want him for unspecified reasons, so Oakley decides that the best thing to do would be to go out West to visit his sister and her family in Santa Rosa, California.

The news that the elder Charlie is coming after the younger Charlie merely thought of it ignites her with excitement. It feels like some kind of great turn of fate, a telepathic connection between her and her namesake. They’re so alike, she notes, with similar traits, and the wide-eyed happiness she shows when she looks at him for the first time in years, but the elder Charlie is hiding something horrible just beneath his placid veneer. This corruption of something that’s supposed to be so safe, both the family unit and the small idealized town of Santa Rosa, by the elder Charlie’s mere presence is the makings of a horror film. The younger Charlie’s slow realization of the reality of who her uncle is functions as the core of the film, and it’s what makes it all work. She has her own clues to dig out, things that could be explained away, but she also has external voices pushing her along in the form of two out of state law enforcement officials.

Through all of the small reveals, including some from Uncle Charlie himself, the younger Charlie just can’t quite let go of her admiration and love for that idealized uncle of hers.

Everything about this movie is pitch perfect. From the performances to the steady reveal of Uncle Charlie’s past and the younger Charlie’s investigation, to the side characters, everything comes together to create a complete package of a story. Emma, Uncle Charlie’s sister, loves her brother so much and can’t bear the thought of anything bad about him, providing the younger Charlie the perfect emotional reason to simply not out her uncle on top of her own conflicting feelings towards him. Emma’s husband gets caught up with a friend talking about the perfect way to murder each other in a friendly game of wits, and it feeds directly into the overall story dealing with Uncle Charlie’s past.

Forced to operate under war time limitations about the amount of money a movie could spend on a set, Shadow of a Doubt was filmed in Santa Rosa itself, including the two-story house that functions as the family’s home. It looks great, filmed in beautiful black and white by Joseph Valentine and with a surprisingly strong score from Dimitri Tiomkin, the movie’s disparate elements come together to create a perfectly cohesive picture that focused on ramping up the tension from beginning to end as we discover the truth of Uncle Charlie and then watch as the younger Charlie tries to find a way to get rid of him without outing him at the same time.

This is up there with The 39 Steps and Rebecca as Hitchcock’s finest work up to this point in his career.

4 thoughts on “Shadow of a Doubt”