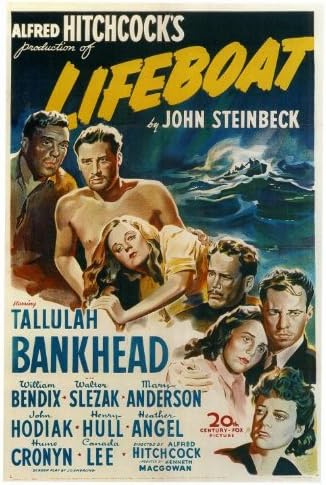 #25 in my Ranking of Alfred Hitchcock’s films.

Alfred Hitchcock had an experimental streak in him, and I think, outside of his mandated use of sound at the beginning of talkies, Lifeboat represents his first effort to turn an entire film into an experiment. Later films fit this sort of effort, like the one-shot technique of Rope, the use of 3D in Dial M for Murder, or the use of his television crew for Psycho, but it’s Lifeboat that feels like Hitchcock using a film as an excuse just to try something. The fact that he didn’t rest on his laurels, that he wanted to find new ways to do things, is one of the reasons that his career lasted so long and his reputation is so strong.

So, the technique at hand here is a one set movie, but, on top of that, the one set was a small boat that was constantly rocking like it was actually on the water with a bunch of water getting splashed on the actors. Hitchcock kept a pad of paper clipped to his camera with all of his camera angles listed so that when he felt like he was getting bored with an angle, he could just refer back to his pad and come up with something new. What’s kind of amazing about the movie visually is that it never feels claustrophobic, and I was reminded of his first full talkie, the filmed play Juno and the Paycock, that felt claustrophobic very early on because of the flatness of the filmmaking on display. Hitchcock obviously worked hard to find ways to make the movie visually interesting despite being trapped on a small boat with a small group of people.

So, the story opens with a woman, the journalist Connie Porter, sitting alone in a ramshackle lifeboat after her passenger steamer was hit by a torpedo and sunk. Quickly, she gains eight companions from different members of the crew to a porter to a couple of other passengers and finally a German speaking man who came from the U-boat that sunk along with the steamer. It becomes a tale of survival and paranoia as diminishing supplies and despair begin to wreak havoc on the small group of survivors.

Now, ensemble pieces are hard. For as much as I enjoy this film, there’s a point where we get in the story and it feels like we stop seeing one story play out. Instead, it feels like we’re watching a series of stories play out next to each other. The little romance between Sparks and Alice is nice, but it ends up feeling disconnected from the plight of Gus as he loses his leg which feels different from the series of poker games between Rittenhouse, the industrialist, and John, the grease monkey. There’s a certain common despair that seeps into them all, but I still feel like they end up being disconnected stories that just happen to take place in the same location.

That being said, the fact that the movie is able to remain interesting from beginning to end despite its small cast and tight location is evidence of Hitchcock’s talent. It’s a quality little entertainment that also happens to be a narrative and cinematic experiment.