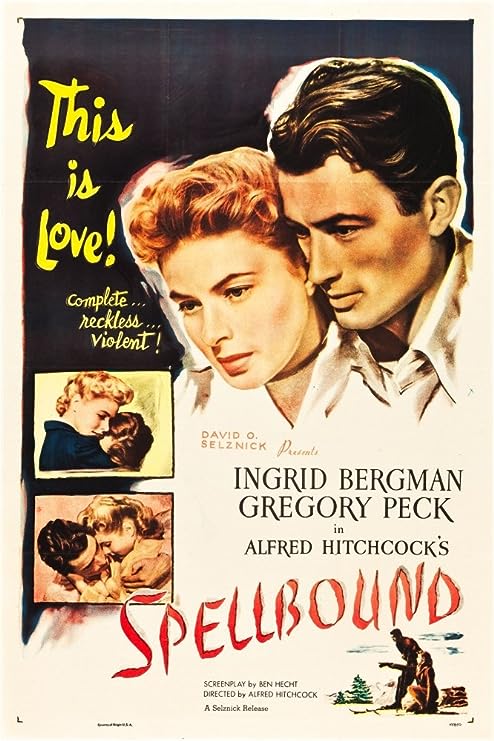 #47 in my Ranking of Alfred Hitchcock’s films.

I just steadily lost investment in this film as it proceeded along. There’s also something very mechanical at the heart of Hitchcock’s films, especially those that center around chases. They’re heavily plotted affairs, and plot is the least human of elements that go into a narrative. It’s important to mask the movements of plot with things that feel more human, particularly with character motivations. It needs to feel like characters are making the choices that move the plot forward out of their own self interest rather than the needs of the plot in order to move forward. My problem with Spellbound is the fact that the veneer over the plotting gears is so thin and unconvincing.

The first major element is the love story. Dr. Constance Peterson is a psychologist at a small hospital in the New York countryside, and she welcomes the new head of the hospital, Dr. Anthony Edwards, who is replacing the old head, Dr. Murchison. It turns out that Dr. Edwards is not actually Dr. Edwards, but is John Ballantyne, one of Dr. Edwards’ patients who is suffering from amnesia and truly thinks he’s Dr. Edwards. Instantly, though, Constance and John fall madly in love. It never sells the idea, instead giving us one quick scene in the countryside and then dialogue about how instant their attraction is. The irony is that I feel that everything that follows would have worked better if Constance was trying to help John through a dedicated professional motive rather than a tacked on romantic one. Because I never believe the romance, though, I find every scene where Constance pleads with someone to save the man she loves unconvincing at best.

The other major element of the movie is the psychoanalysis itself. This feels like a really trendy movie in its embrace of psychoanalysis as its topic, especially with its opening text crawl that gives a brief explanation of what the science is and what it’s supposed to accomplish. The thing about treating psychosis and mental illness in dramatic material is that it’s usually pretty disconnected with how these things are in real life. That doesn’t bother me, however it does lend itself to the mechanical nature of plotting more than the human nature of character. So, we have two people that I’m not convinced love each other following a trail of breadcrumbs that feels artificial and designed, letting each little new morsel of information come out on our inevitable path towards the reveal near the end of the film.

It all feels just so artificial.

Now, everyone always talks about the dream sequence, so I shall too. Hitchcock hired Salvador Dali to help design a dream that John has that’s supposed to help take the audience and characters one more step towards the resolution. For the little amount of time we see the dream, it’s exactly what you would expect from a Dali designed sequence made in the 40s. Stark, weird, lots of eyes, odd angles, and large all at once. It’s quite a sight. It’s also over before it really begins. I’ve read that it was originally intended to be a twenty minute long sequence before it got cut down at various stages to about two minutes. Now, I don’t know if a twenty minute long dream sequence in the second half of this movie would have improved it, but I think the praise heaped on it might have become more proportionate. As a grand two minutes of a 111 minute long film, it’s not really worth that much attention.

Now, once the reveal of John’s entire lost memory is completed, the movie moves into more traditional thriller ground and it begins to work better. It’s really only the final fifteen minutes or so of the picture, but it functions more convincingly as the real killer comes out of the shadows than the rest of the movie up to that point.

This movie certainly has its fans, but I just don’t fit in with them. I find it plodding and unconvincing for very long stretches with its much ballyhooed dream sequence to be too short to really stand out. It contains all of the elements of a Hitchcock thriller, but everything just feels off. I keep wanting to like it more than I do, but I just can’t do it.