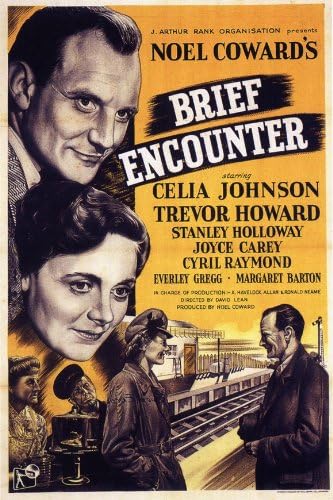 #1 in my ranking of David Lean’s films.

This is such a sad little movie about two people who don’t know that they’re missing anything in their lives and then find each other to discover that which they are missing in the other person. It’s a view into a new life for both of them, only for it all to come to an end and for them to return to the lives they had before. This lack of permanence is the core of the film, and feeds well into David Lean’s Summertime, which I ended up watching a few days later. I suppose I should write my thoughts on that one too at some point.

One of the interesting things about the story’s structure is that it plays out as a confession from Laura Jesson to her husband, but the confession is entirely in her head as they sit in their small sitting room and he does the crossword after a long day. She’s unburdening herself of the affair she just finished with Dr. Alec Harvey, a general practitioner she meets at Milford on her Thursday excursions to buy groceries and take in a movie. The key to this movie’s success is the very strong relationship that builds between Laura and Alec. They are both happy in their little lives, and then the new person gets introduced and they feel like they’ve been missing something. Laura is warmer than Alec’s wife, and Alec is more exciting than Laura’s husband.

But the relationship is a slow build. He helps her get some grit out of her eye, then they find themselves in a crowded restaurant for lunch and share a table. It’s a series of small steps that mostly center around the small train station at Milford where they wait for their respective trains that go in opposite directions. They steadily get to know each other and like each other to the point that they profess their love for each other. That steady build and tight focus on their relationship is really what makes the whole emotional journey work.

When reality seeps in and the two decide that their relationship cannot continue, Alec takes a job in South Africa, essentially running away while also finding a way to advance his career from just being a general practitioner. Laura understands him to a certain extent, but she can’t quite accept it. She gets thrown into despair, and when their final goodbye gets cut short by a busybody acquaintance of Laura’s, they don’t even get their last words, just a quick tip of the hat. This was actually where the movie began, but the scene played out from the acquaintance’s perspective. We saw Laura disappear from the table and out of the little tea shop only to return moments later with a thin excuse. Now, late in the film, we see how deep her sadness had run and that she was close to suicide in the face of the reality of losing Alec.

But that’s not where she was when she started her internal confession. She was in her sitting room with her husband, her genial and clueless husband, who embraces her warmly when she breaks down into tears and refuses an explanation. In the final moments of the film, she gets a firm reminder of what made her so content before she met Alec, and it’s the good man who was doing the crossword on the other side of the room. That moment where Laura melts into her husband’s arms after nearly running away from him to chase a dream is the height of the film for me.

I would have considered the temporal nature of the relationship interesting, but the same basic concept playing out in Summertime makes me think that this was something that interested Lean as a filmmaker, pointing me towards the final section of Lawrence of Arabia where peace instantly breaks down or the final moments of Bridge on the River Kwai where Alec Guinness’s Lieutenant Colonel Nicholson realizes what he had built for the enemy. This idea of temporary emotions giving way for more permanent situations seems to be an idea close to Lean’s heart, and something I’ll have to keep an eye out for.

Brief Encounter, though, is a touching little film about brief emotions and how they can linger and even fade over time. Over the course of Laura’s internal confession, she feels everything she felt, and in the end, she finds that she can begin to move on. It’s a wonderful little film that expertly uses sight and sound to create its series of emotions and sell them to the audience.