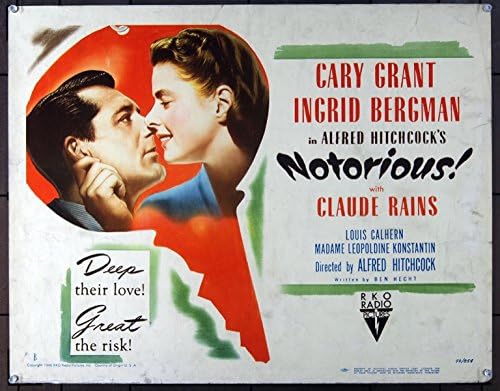 #1 in my Ranking of Alfred Hitchcock’s films.

This has long been my favorite Alfred Hitchcock movie, ever since I first saw it in college, and I think it’s obvious why. The visuals are so exactingly precise, the characters so well fleshed out, and the storytelling so efficient and well built. It contains inversions of some of conventions that Hitchcock had become known for all while supporting some great sequences just oozing with tension.

It’s Hitchcock at his best and most topical, using the end of the recent World War and newfound fears of nuclear weapons as convincing window dressing to a story about trust and love. The MacGuffin has something to do with nuclear material that former Nazis are using for something in Brazil right after the fall of the Third Reich, but it’s really just an excuse for the spy story around it.

The story begins with Alicia Huberman (Ingrid Bergman) leaving the sentencing of her father, a convicted war criminal for the Nazi regime in Miami. She gets recruited by Devlin (Cary Grant) for an unspecified mission with the American intelligence apparatus that takes them to Rio. What’s most interesting about these early scenes is that these are the scenes that do establish the love that Alicia and Devlin end up feeling for each other, but it’s twisted into a form that makes you wonder if anything genuine is actually passing between them. Instead of quickly establishing true love, we get words of true love as well as words questioning it, particularly from Alicia, and it takes the whole movie to figure out the real emotional state. In it’s weird, and oftentimes cruel, portrayal of a love affair, I find it far more convincing that what Hitchcock had Bergman and Peck go through in Spellbound.

The mission ends up being that Alicia needs to get close to Alexander Sebastian (Claude Rains), a former Nazi that the Americans believe is part of a ring out to do something, they don’t know what, in Brazil. Alicia and Alex knew each other some years back when Alex fawned over her and she rebuked him, so her status as the child of a Nazi war criminal and former love interest of Alex makes her perfect as a way in. The great twist is that Devlin didn’t know the mission when he recruited Alicia, so any genuine feelings that he might have been feeling for her have to get swept aside as he gets her to pursue and eventually marry a former Nazi. Alicia, though, is not some waif being led and forced into action. She starts the movie as a strong woman, trying to forge a new identity as a nihilist drunk who doesn’t care about the world but is unable to deny her patriotism for her country. She wants to help on some level for patriotic reasons, but she also wants to strike out against Devlin for his dispassionate treatment of her after their brief love affair.

One of the most interesting things about a movie full of interesting things is Claude Rains as Alex Sebastian. He is easily the most sympathetic character in the movie from a purely emotional point of view. He obviously loves Alicia deeply and warmly, balancing a sense of jealousy for his beautiful wife with a desire for her to be happy. He opens up his heart and home to his new wife, and she’s never faithful to him, harboring feelings towards that Devlin character.

In terms of the film’s storytelling, it’s really interesting that Notorious contains some direct reversals of things that Hitchcock had become famous for. The most obvious one is the romance. It’s bitter and cynical, playing off of people saying what they shouldn’t say, lying to each other, instead of earnest and innocent expressions of desire. The other is the idea of the wrong man. The wrong man in this isn’t Devlin, the male protagonist, or even Alicia, the female protagonist. It ends up being Alex, unable to go to the police or even his friends when he finds out that his wife is not who she says she is, that his fellow Nazis in Brazil could find out the monumental mistake he had made. The tension that forms in the final scene as the action balances between the different desires of the different characters, all suddenly in alignment in action even though they are all different in purpose, stems from this. Our mind wants Devlin and Alicia to get away, but our heart can’t stop feeling for the poor Alex, even though he’s a Nazi.

One of the other great things about the film is the camera work. It’s some of the most inventive and expressive use of a camera to tell a story visually that I can think of. There’s the famous shot, a zoom from the upper balcony over Alex’s large open space down to Alicia’s hand where she’s holding the key to the wine cellar that will unlock whatever secret is hidden there. My favorite, though, is how the camera treats the tea cup.

Alex and his mother have found out that Alicia is an American agent, and they agree that they need to get rid of her in a way that will seem natural enough so that Alex’s fellow conspirators do not suspect foul play. They don’t mention what it is, but the next scene pays particular attention to the tea cup that Alicia receives so that we don’t need any explicit call to know what’s going on, letting us figure it out just ahead of Alicia. The precise movements of the camera sell it without overdoing it, and that precise movement is present throughout the film. From the coffee cup to the long embrace and series of kisses to the final descent down the stairs, the visual compositions and camera sweeping through the geography, keeping everything’s place clear is remarkable.

From beginning to end, this feels like Hitchcock at his most effortless and cynical at the same time. It’s a marvelous combination that turns a lot of things on their heads and creates a stately and remarkable achievement that balances a complex series of emotions while demonstrating incredible command of the craft of filmmaking. It’s an absolutely great film.