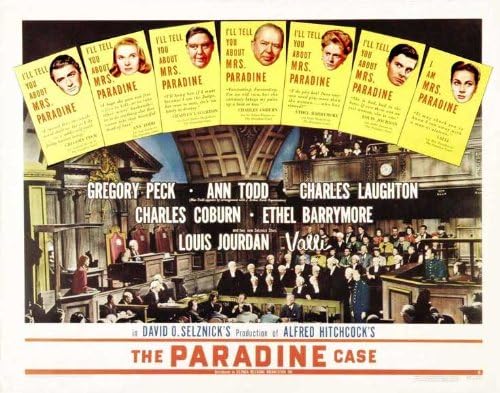 #50 in my Ranking of Alfred Hitchcock’s films.

This very much feels like a movie that Hitchcock didn’t really care about, in line with Gregory Peck’s assertion that Hitchcock was bored on set. This was a passion project of David O. Selznick more than Hitchcock, and it was Hitchcock’s last movie made for the legendary Hollywood producer. Selznick has sole writing credit (though his work was a large rewrite of another draft) and he finished the post-production work when Hitchcock demanded his standard $1,000 a day for the rest of the post-production process. I really got the sense that Hitchcock just drifted through this, putting in the base amount of effort to get through to the end of the day, and it really shows.

This is atypical of a Hitchcock film in general in that it’s mostly a courtroom drama. The setting and the presence of Charles Laughton reminded me greatly of Billy Wilder’s far superior Witness for the Prosecution, made about a decade later. The problems really seem to stem from the fact that this was actually a much longer film originally (the first cut was about 3 hours and got whittled down do just under two). This feels like it’s supposed to be about much more than the court case, and that’s most evident in the split between the first hour and the second.

The first hour is meant to introduce us to our characters, but the emotional center is Gregory Peck’s Anthony Keane, the lawyer hired to defend the woman accused of murdering her husband, Maddalena. It’s mostly about his relationship with his wife, Gay, and how he balances that with his work and the beautiful woman he’s set to defend. There’s a surprising amount of talk about Anthony falling in love with Maddalena, but it never gets actually sold to the audience. Sure, she’s beautiful, but that’s just about the limit to the attraction, and it seems like thin gruel to base this sort of moral ambiguity on. It doesn’t help that it ultimately doesn’t matter. Another curious thing about the first hour is that it’s so much about the personalities, including Andre Latour, the Canadian valet to the murdered husband, but it says almost nothing about the actual crime. We don’t discover the details of the crime until the second half of the film in the courtroom itself.

I found the first half largely unconvincing as characters moved around with seemingly little motivation, and the motivations they had were so clouded or unconvincing that I was relieved when the courtroom drama stuff actually functioned better. The second half isn’t great filmmaking or storytelling, but it’s pretty basic courtroom stuff told reasonably well. It also helps that Charles Laughton, as the judge in the case, is present to give us his wonderfully sardonic take on the unconventional tactics that Anthony Keane decides to take. However, Anthony Keane’s supposed reputation as a great lawyer takes a serious hit when he tries to carry out his strategy. His goal is to disprove to a reasonable degree that Maddalena committed the murder, and instead of focusing on anything resembling an attack on beyond a reasonable doubt, he tries to affirmatively accuse Latour in court in a trial where he’s not on trial. It’s a ridiculously stupid tactic to take. The drama that unfolds because of this stupid decision is fine, but the movie can never escape the fact that Keane introduces enough reasonable doubt that he could have gotten his client off the hook without the later complications.

It’s not a good film, though it’s reasonably well made and well acted. There’s no flash of style to it, just a rather handsome looking movie with very curious choices that color everything about it. It makes me glad that Hitchcock left Selznick behind. Even on Rebecca, Selznick was not a great collaborator, and Hitchcock needed freedom from that.

4 thoughts on “The Paradine Case”