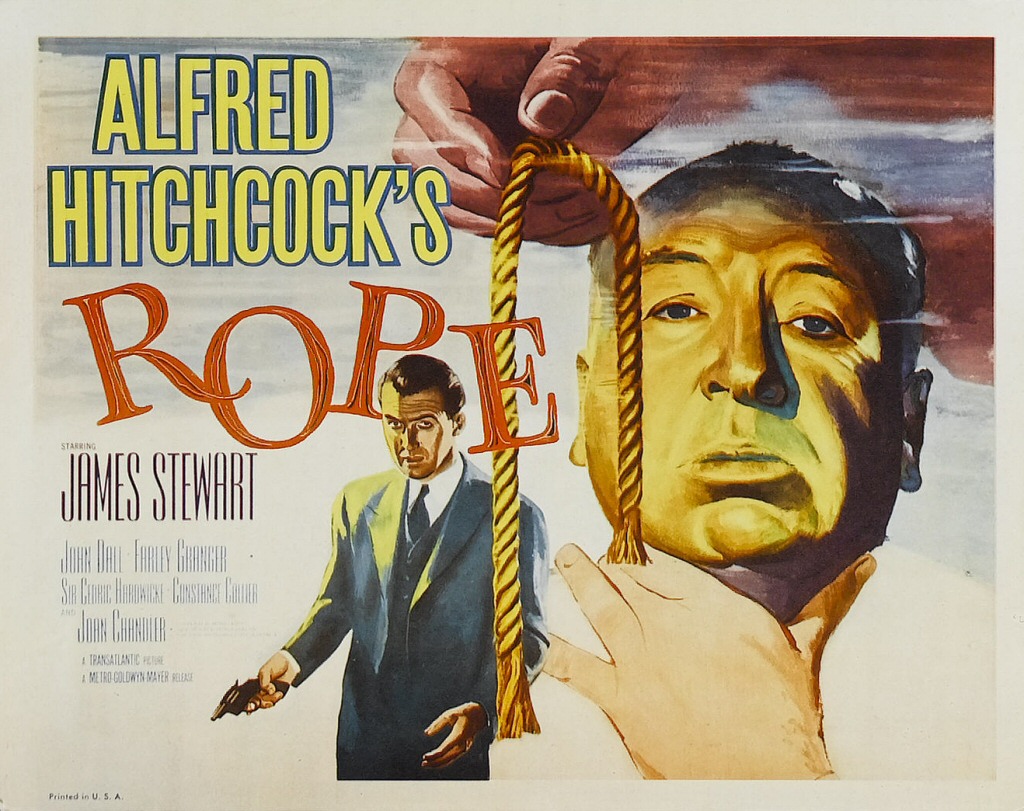 #23 in my Ranking of Alfred Hitchcock’s films.

The most obvious example of Hitchcock’s experimental streak, Rope is the counterexample to his first full sound feature, Juno and the Paycock. Both were adaptations of plays, but the first film was boringly filmed with no cinematic touches while the later film is truly a cinematic experiment, offering a roving camera that highlights different elements of the scene in an effort to replicate the function of editing. In terms of performance and story, I’m fairly on board with the film, but in terms of effect there’s obviously something missing.

The material of the film fits in perfectly with Hitchcock’s other well known films. It’s about murder, of course, with a MacGuffin at the edge of the frame for most of the film, but there’s a surprising lack of tension. The ideas behind the motives of the characters are an interesting back and forth centered on Nietzsche’s ides of the ubermensch and the problems therein, which carry the movie, but the actual fact of the murder and the edge that the murderers dance on is surprisingly lifeless. On paper, the audience should be increasingly on edge, but there’s something to the long take technique, no matter how well or inventively utilized it is, there’s a missing element to give the scene actual tension.

The movie begins with Phillip and Brandon murdering their friend David. They have no motive to do it other than to do it. It’s an extension of the ideas taught to them by their old teacher Rupert about how some people are just more worthy of life than others, and those deemed more worthy of life should have the ability to snuff out the lives of those they deem unworthy. Rupert shows up for the party in the same apartment later and gives his humorous version of it, making light of the idea of killing people in front of you in a ticket line or occupying the table you want at a restaurant. It’s really petty when he says it, but he obviously believes it, and the murder that Phillip and Brandon carried out obviously fits in well with the worldview that Rupert describes.

The party is the twisted vision of Brandon, the brains behind the murder, and his effort to turn murder into a masterpiece of art. He invites David’s parents, his girl, and the girl’s ex-boyfriend. They are to dine right next to the chest that contains their beloved David’s corpse in an effort to parade Brandon’s genius in front of them without them realizing it. Phillip, on the other hand, is much like Raskolnikov in Crime and Punishment and sees the doom stemming from his evil act (he’s the one who actually strangled David with the rope) in ways that will destroy him, leading him to moments where he will give himself away. That really should be the main source of tension in the film, and there are moments where it spikes because of Phillip’s reactions, but the long take technique has us moving on fluidly to the next point of focus without allowing Hitchcock the tools to heighten the moments further.

What’s most interesting about this film is Jimmy Stewart’s Rupert, their old teacher. Stewart looked back with some scorn at this role, thinking himself miscast, but I don’t really see that in him. I think he carries it fine, especially in the movie’s final moments when Rupert sees the monstrosity of what he’s advocated for years made real by two young men he knew as children. He gets slapped in the face metaphorically, and he has to completely re-evaluate everything he’s ever said, perhaps confronted with the fact that, as Brandon says, he often thinks little about the meaning of what he says, going for sound rather than meaning.

Without Rupert, the movie would be much thinner and less interesting. Robbed of the inherent tension that Hitchcock seemed so effortlessly able to conjure up at will in other pictures, the movie would be a dull affair about a know-it-all brat getting away with murder. With Rupert, it’s about the disconnect between the intellect and the physical reality that supports it. It’s a solidly good film as it is, though the experiment robs the film of some of its power, admirable it may be technically.