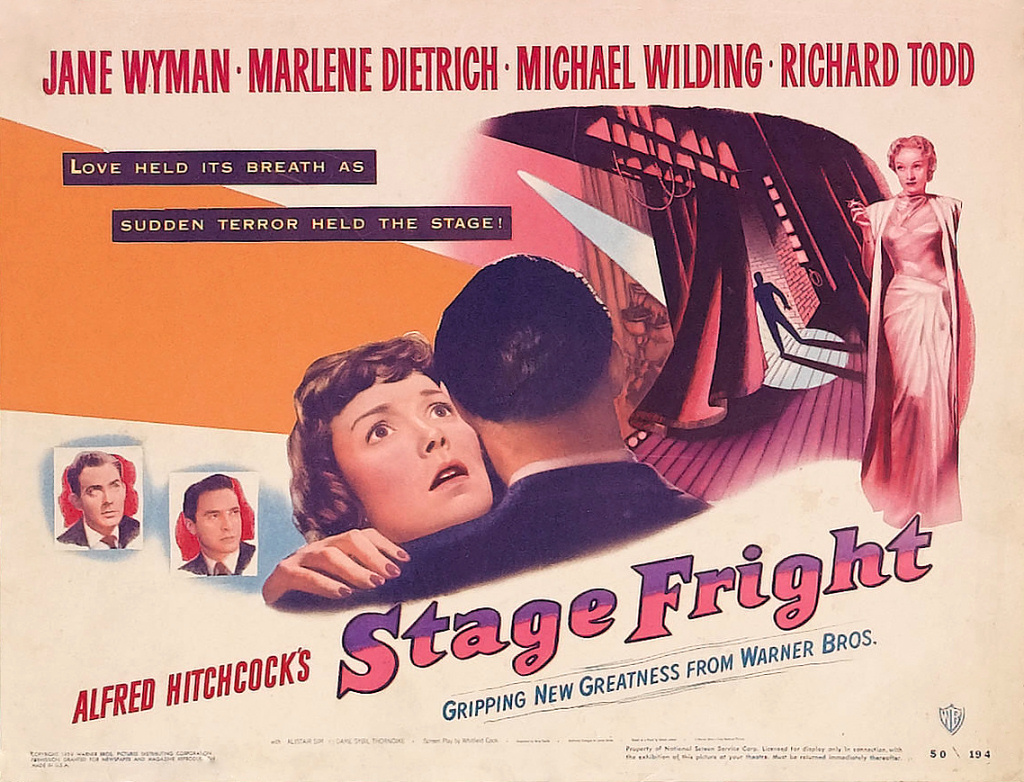 #30 in my Ranking of Alfred Hitchcock’s films.

Spoiler alert, because I kind of hurt my viewing experience by knowing the below before I watched the film.

We take it for granted, but the idea of the unreliable narrator was once an unknown concept in film. There seemed to be an implicit agreement between filmmaker and audience that what the filmmaker showed on screen literally happened within the narrative of the film itself. When the first ten minutes or so of Stage Fright turn out to be untrue in certain respects, the audiences of the day were a bit flummoxed and, in some corners, angered by the fact. I often say that movies shouldn’t lie to their audiences (I saw so a few times in my review of Mission: Impossible III), but there’s a difference between a filmmaker knowingly presenting falsehoods without any differentiation from the rest of the narrative, or moving things around to mean what they don’t mean, or intentionally withholding evidence from the audience that the characters themselves know, and dramatizing the words of a character who lies. It’s the character lying to the protagonist and, by extension, the audience, so we are on the same footing as our protagonist.

That being said, I really wish I hadn’t read that the first ten minutes were a lie because I guessed the real identity of the killer very early. It wasn’t because the movie let it slip, but because I had read something outside of the film that gave it away. That meant that I was ahead of the protagonist from the start, and it colored the experience. I did my best to put on my critical hat to wade through my own issues, trying to watch the film as dispassionately as possible, and I think I got through it. I ended up seeing a minor Hitchcock film that fits in rather well with his overall work and has its own issues, mostly around the justification of the “go it alone” approach that Hitchcock characters usually follow.

Jonathan Cooper, an actor, is driving away from the small English city with Eve, a fellow actress new in the trade, as he tells her how Charlotte, the big singer of the area (played by Marlene Dietrich), came to him that day with blood all over her dress and an admission that she murdered her husband for him. Eve, long smitten with Jonathan, is happy to drive him far away to hide on her father’s boat as the police search for him because he went back to the apartment to try and clean up for Charlotte, but he was seen. Roping in her father, Eve decides to make it her mission to redirect the police investigation from Jonathan to Charlotte by becoming Charlotte’s maid and performing her own investigation. Meanwhile, she befriends and begins to fall for Ordinary Smith, the detective on the case.

One of the curious things about this film centers on Jane Wyman, who plays Eve. Reading up a bit on the making of the film, she was really reticent about appearing like a frumpy maid alongside Marlene Dietrich’s much more glamorous figure, so, against her director’s wishes, she made herself up while playing the maid making harder to buy the idea that Eve is effectively playing two people, herself and the maid. When she announces to a police officer who knows her as the maid when she’s out as herself that she took his advice to apply some makeup to make herself look better, it’s hard to tell the difference between how she looked before versus how she looked in that moment other than a change of clothes.

Another thing is the whole method of taking on this side-investigation to implicate Charlotte. The movie is supposed to be about acting and actors, but the film has trouble balancing the text and subtext, strengthening the text enough so that it can function without the subtext. It’s when Eve’s father gets involved that things probably go a little too overboard. It’s not enough to sink the film at all, but it does present a friction between the movie’s point and its actual story that I don’t think it entirely resolves.

That being said, outside of these concerns, Stage Fright is a solid little mystery thriller. While the reasons for the side investigation seem to thin out as the movie progresses, the actual actions of the investigation are well handled and often very good sources of tension, like when Eve’s father has to win a doll at a carnival so he can smear blood on it and then present it to Charlotte, who is performing the next tent over, through a little boy. It’s kind of a weird set of events, but it ends up working quite well together. The reveal of the truth is handled really well too. Eve and the police set up a microphone in Charlotte’s dressing room to try and get her to admit to the murder, but she reveals the truth that, if I hadn’t known that the start of the movie was a lie told by Jonathan, would have been a nice surprise.

The cast is overall quite good as well. Aside from Jane Wyman’s insistence on looking too good for the part as the maid, she’s a fine stand-in for the audience as she navigates the mystery. Marlene Dietrich is her normally seductive and intelligent self, fully in command (also of the cinematography of her scenes, apparently). Alistair Sim is my favorite as Eve’s father, though. He’s kind, smart, and cunning all at once, with big expressive eyes and a cutting sense of humor.

I really did like this movie, even though, though my own fault, I had to work a little bit harder to appreciate it.