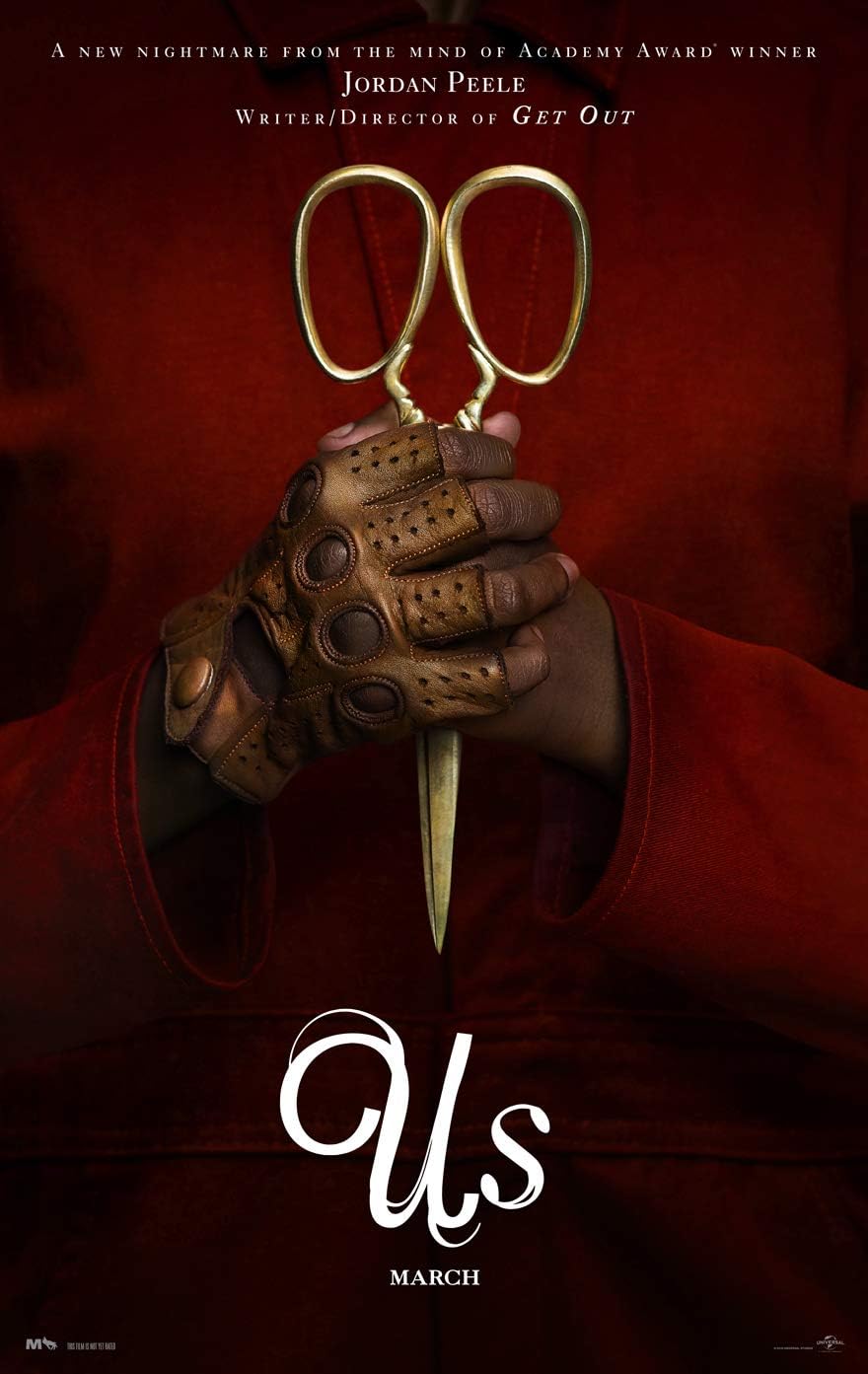 After Jordan Peele’s small and successful Get Out, it feels like producers rushed him to make a follow up, and I feel like the end result carries signs of a script that didn’t get nearly as much time and attention as his previous film. It’s both overdone and undercooked at the same time, like a roast that’s been burnt on the outside and left raw on the inside. There’s some good stuff in the film, but I ultimately feel like the core concept didn’t get thought out enough and the second act ends up dragging along for too long.

Adelaide and her family arrive at their summer home outside Santa Cruz where she had a terrifying event as a child when she wandered away from her parents and saw a girl who looked exactly like her in a funhouse on the beach. They meet some friends, another family with two older girls, and have a decent day despite Adelaide’s reticence about going back to the beach. This is all handled well with flashbacks to the childhood event dominating the early part of the film and some solid character work, differentiating the different characters and giving them a breath of life. It’s the kind of solid work that should go into a first act of a mysterious horror film where we’re expected to care about the fates of our characters.

And then the second act begins, and it starts to really drag. This is where we are introduced to the “tethered”. It’s unclear until late in the third act what these people actually are, but from the beginning they are doubles of our characters, dressed in red jumpsuits with a single brown glove over one hand and each with a pair of golden scissors. Only Adelaide’s tethered talks, and she does so in a raspy, unnerving voice. The rest grunt and howl. She ends up explaining, in tortured terms, her role as a secondary actor to Adelaide’s life, being forced to make the same choices as Adelaide without her own consent, forced to marry a brutish man she does not love because he is Adelaide’s husband’s tethered and forced to bear monstrous children she hates because Adelaide bore children at the same time. This goes on for a while, and then it turns into a chase for each character and their tethered. We observe in too much detail how each one gets away. This really needed to be trimmed down by about five minutes.

The movie then transitions to the friends’ house where we see an amusing little back and forth between husband and wife who hate each other followed by quick violence as their tethered appear and kill them. My problems with this second act really began to coalesce here. An already overlong chase and horror sequence involving our main characters was interrupted only very briefly by characters who don’t actually matter that much bickering before our main characters arrive at the house to go through a lot of the same type of horror again without really changing anything. It really just extends the sequence without changing enough. We do get an exposition dump afterwards showing, on TV, how widespread the attack is, but I imagine the exposition being given between the two attacks, cutting out the cute hate talk between husband and wife (or just the attack), and Adelaide approaching the house without knowing what she’s going to meet while also knowing that it’s more than her own tethered out there. It would have been a nice buildup to the renewed horror rather than just jumping into it again.

The third act is where all of the explanation for how the tethered works lays in wait, and it’s kind of amazing how much Peele decided to include as well as leave out. For instance, there is a one sentence explanation for the genesis of the lives of the tethered in the tunnels under America: it was an experiment that got abandoned. What the experiment was is unclear, but then the movie shows us in rather excruciating detail the lives of these people in the tunnels, and none of it makes a lick of sense. From the rabbits that they eat (where do they come from and how many are there?) to repeating the actions of those above in the confined spaces of the tunnels, it all feels like an idea spun late at night after a few good bong hits rather than a well-considered piece of narrative logic with definite meaning. There’s obviously supposed to be some kind of social commentary (probably about how there are two levels of society and the lower level gets shafted on everything), but the details of the world that Peele set up end up making no sense in regards to that supposed comment. I wonder if a more purely science fiction explanation (like an alternate dimension) might have worked better more literally, though it probably would have lost any effort at social commentary that he was attempting.

One thing I did love about the film is the final twist. I usually don’t like twists because they tend to be cheats, designed to trick the audience more than anything (see High Tension). However, the final twist of Us actually follows from clues that came before it, and, more importantly, it actually completely changes the audience’s perceptions of what came before. It doesn’t improve the overlong second act or the issues with the world’s explanations, but it is still a great twist.

I just wish it was to a movie more deserving of revisiting.