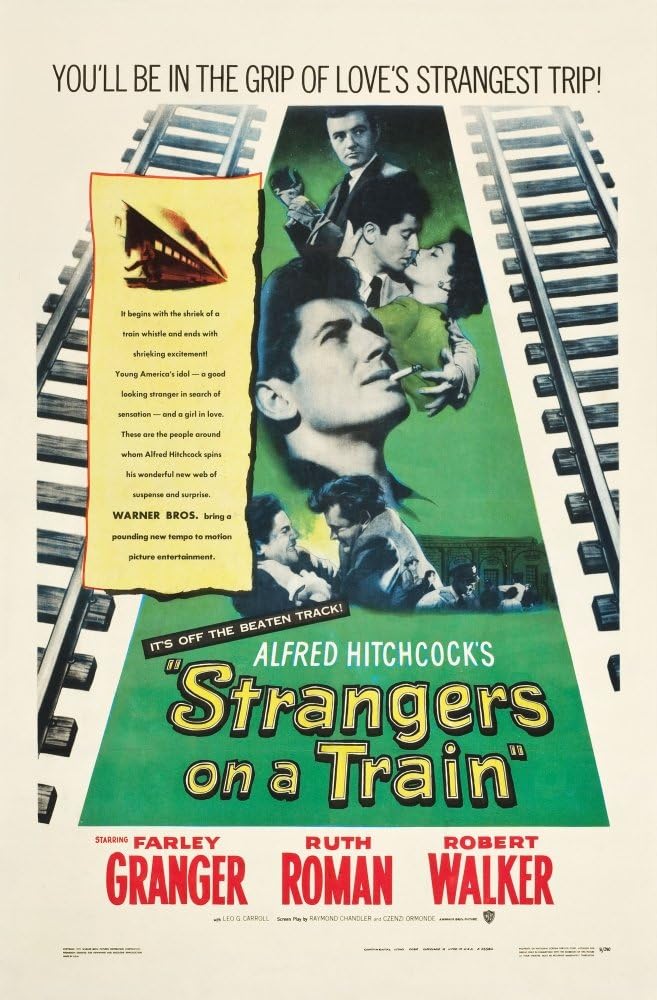 #18 in my Ranking of Alfred Hitchcock’s films.

Much like The Lady Vanishes, Strangers on a Train is widely considered to be one of Hitchcock’s best, and, while I do enjoy it as a solidly good thriller, I find myself thinking just a bit less of it than the rest of the movie loving world. I knew the difference between my own opinion and the consensus going into this rewatch, so I had it on my mind as it went, open to being wrong (as I was on Shadow of a Doubt). In the end, though, I still found it to be an enjoyable thriller with some standout moments, but still second-tier Hitchcock.

Guy Haines is a rising tennis star on a train to see his soon-to-be ex-wife on his way to Washington D.C. to prepare for an upcoming match and to meet his new paramour. As he sits in a car, he meets Bruno, a man who seems to know every word written in the newspapers about Guy and the rumors of his marital troubles. This initial interaction bothers me because I find it hard to believe that Guy would do anything but find any excuse whatsoever to get away from Bruno. Bruno is too aggressive, knowledgeable of Guy’s personal life, and overbearing in their first meeting. I find it hard to believe that Guy would accept Bruno’s invitation to his private car to share lunch. Once there, Bruno’s far more laidback, moving away from the overbearingness of his introduction to Guy, but he’s also obviously crazy. The way he brings up his random theories left and right, ending with his theory of the crisscross murder. The only part of the entire first ten minutes of the film that feels right is Guy dismissively humoring Bruno as he leaves the cabin, saying whatever just to get out.

I do wonder if I would like the rest of the movie more if I bought the first ten minutes, because the rest of the movie is actually really good. From Guy’s interactions with his wife as she pulls back on her promise to divorce him to Bruno sneaking back to Metcalf to kill her at the carnival to Bruno tracking down Guy to get him to perform the murder that he assumes Guy promised, it’s a creepy build towards a surprisingly action oriented ending. Bruno’s constant presence in the periphery of most scenes, where Guy is paranoid and beginning to look over his shoulder for the creep out to get him to commit a murder.

And Bruno himself is kind of great. Played in one of his last roles by Robert Walker, he’s unhinged in interesting ways. The way he just latches onto Guy feels almost premeditated like he had planned the meeting on the train. His attachment to his mother and his hatred towards his father along with how he dresses and holds himself act as a Hayes Code era signal of his homosexuality. Walker makes him just interesting to watch, unnerving the audience as they wonder what he could do next. He killed a woman he had never met before just because he could, and he’s just so eager to get someone else to murder his father.

There’s one later scene that bothers me as well, though. Bruno, being a rich heir, gets his way into a party at a senator’s house (Guy’s new flame is the daughter of the senator), and he ends up playacting strangulation with an older female guest. This is fine and fits his character (it’s also something Hitchcock liked to do at parties, apparently), but it’s after he loses his concentration and actually strangles the woman to the point that she can’t breathe and weeps that I don’t like. They just let him go. They don’t call the cops on him, even those who aren’t in on Guy’s motives for not calling the police. There’s a large party of wealthy people, presumably all connected to power in DC, and not one of them tries to get the police involved. It feels wrong, and it feels designed to give some information to some characters but let Bruno loose for the final act. It’s the mechanical nature of the plot peeking out, and it distracts me.

The final large sequence is a sustained bit of suspense that follows Guy at his tennis match, which he’s desperately trying to end early in an effort to keep the police from coming to the conclusion that he’s the murderer, and Bruno making it back to Metcalf with Guy’s lighter that he’s planning on planting at the scene of the murder. It builds as Bruno loses the lighter down the grate on the street and Guy has to turn his quick 3-0 win into a slog of a 3-2 win. Bruno doesn’t expect the traffic to the remote little island where he murdered Guy’s wife which gives Guy enough time to make it to Metcalf after he gets away from the police. It’s all like clockwork, and it works quite well to build the tension of the final moments.

It’s ironic, I think, that my biggest problems with the movie stem from one of its greatest strengths. Bruno is a great character, but in order for him to actually move the plot forward or even get it going, those around him have to behave in ways that don’t seem quite right. Still, it’s a solid thriller outside of those moments, and one that I really do enjoy.

3 thoughts on “Strangers on a Train”