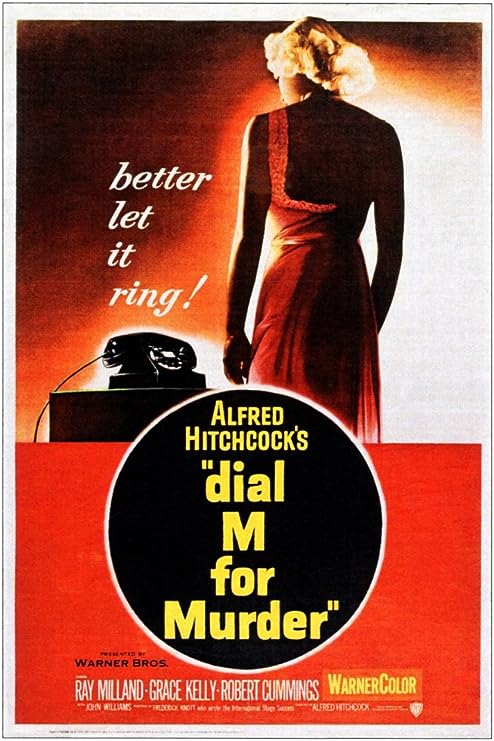 #14 in my Ranking of Alfred Hitchcock’s films.

From what I’ve read, Hitchcock took the job of directing Dial M for Murder as little more than the last contracted film he had to do to complete his relationship with Warner Brothers. It also lacks certain marks of Hitchcock’s, like how he was free with adapting material to change things such as who the killer was, keeping the original stage play pretty much wholly intact. And yet, despite Hitchcock’s apparent disengagement with the material, he still managed to craft a highly entertaining and twisting mystery.

Tony Wendice is a former tennis pro turned athletic equipment salesman who married the wealthy Margot. He’s known for a year that she carried on an affair with the American mystery writer Mark. When Mark comes back to London for a visit, he sends both of them off on the town for the evening and invites Swann, an old schoolmate of Tony’s, over. Tony knows of Swann’s troubles with the law that he’s always just a step ahead on, and he, in a steady drip of storytelling and implied threats, convinces Swann to murder Margot for a thousand pounds.

The first thirty minutes of the film remind me of Gambit, the Shirley MacLaine and Michael Caine film from more than a decade later, that spends its first long stretch outlining an illegal activity in rather exacting detail only to watch the scheme (a murder and a con) begin to fall apart almost instantly as the action begins to move. Tony can’t get his wife’s key as easily as he expected, so he has to have an extended back and forth in order to take it from her handbag without her noticing. He can’t place the key outside the apartment where he expected because he and Mark, going out for a stag party as his alibi, leave the apartment in the wrong order. But what’s most interesting is how the plotted murder can end up going so wrong and Tony had covered his tracks so well that he can easily lean into another lie that implicates Margot in, not self-defense, but as a calculated murder to silence a man blackmailing her over a letter Mark had written to her (that Tony had stolen, gotten one of Swann’s fingerprints on, and placed in the dead man’s pocket before the police arrived).

The movie promises us one series of actions and then proceeds to completely undermine it by the halfway point, giving us well beyond the promised and delving into the unknown with intelligence. There are details that get dropped (like Tony switching out Swann’s scarf for Margot’s stocking) that feel inexplicable at the time but get nicely paid off later.

One of the things that helps the movie feel so entertaining is the performances. From Ray Milland as Tony to Grace Kelly as Margot and, especially, John Williams as Chief Inspector Hubbard, the actors embody their roles really well, letting the presence and ability to hand dialogue carry us through the actions. Milland’s alternatively slimy and sincere performance makes Tony’s moves between scheming and supporting of his wife convincing. Kelly’s dazed state in the later parts of the film sell well, and Williams is just simply entertaining as the police officer who seems so far behind Tony and then suddenly so far ahead.

It’s a highly entertaining mystery that moves through its twists deftly and with charm. It’s not Hitchcock’s best, but, if he was as disengaged as the stories say, then it’s probably his best work when he didn’t care.

4 thoughts on “Dial M for Murder”