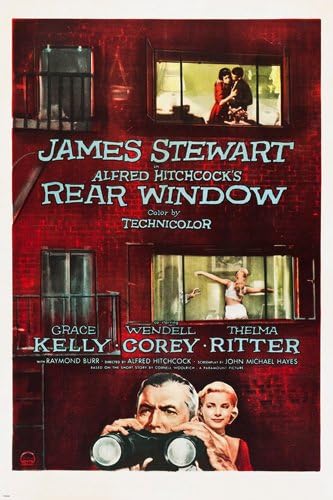 #8 in my Ranking of Alfred Hitchcock’s films.

It’s almost cliché to talk about voyeurism and Hitchcock, but it’s kind of impossible to avoid with Rear Window, the most obviously on point film the man made about both voyeurism and, by extension, the movies. Voyeurism is always at least a running motif in the movies that Hitchcock made, made manifest by people watching other people through peep holes or windows or just out of sight, but it’s in Rear Window where the entirety of the story’s action revolves around one person voyeuristically watching others. However, more importantly, it’s a crackling great thriller with great characters, an intriguing central mystery, and some of the best sequences of pure tension that Hitchcock ever produced in one of his best movies.

The first shot of the movie proper is the sort of efficient visual storytelling you would expect from a practiced hand. It establishes setting, character, and backstory in one small tracking shot from L.B. Jeffries’ apartment that looks out onto the courtyard and the open windows of his neighbors that share the same courtyard. The camera tracks from the different neighbors to Jeff asleep in his wheelchair to Jeff’s leg in a cast to the broken camera he carried when he broke his leg to the picture he took to an inverted picture of Grace Kelly and then, finally, the same picture of Kelly on the cover of a fashion magazine. So, the one shot established the basic premise of watching the neighbors from a single room in an apartment, the main character’s inability to leave, how he got into the physical state, and his complicated relationship with his lady friend, Lisa. On top of that, it takes only a few seconds to establish all of this.

So, Jeff is in week six of seven weeks in a cast after taking a dangerous picture that broke his leg, and he’s bored out of his mind. He’s the kind of guy who needs to travel to feel alive, to go into danger zones to take the pictures that his magazine will purchase from him. The idea of staying in New York to go from one fashion shoot to another in a suit is anathema to him, which makes the relationship between Jeff and Lisa one destined for failure. It’s unclear how their relationship started (it could have begun with the photo in his apartment), but it seems clear that it really flowered in the previous six weeks. He’s stuck, she likes to stay in New York and cater to him, and he feels like it can’t work once he gets his cast off and he’s off to Kashmir to photograph the latest blowup. So, what does Jeff do when he’s stuck in an apartment with nowhere to go? He looks outside.

The courtyard outside his window is shared by about a dozen characters. There’s Miss Torso, a ballerina who likes to dance in her underwear, a composer, Miss Lonelyhearts, an older woman who is desperate for companionship, a newlywed couple, an older couple with a dog they let down in a basket from their third floor apartment down into the courtyard, and the Thorwalds. Mr. Thorwald is a salesman of jewelry (wholesale), and Mrs. Thorwald is an invalid. One rainy night, Jeff watches as Mr. Thorwald leaves the apartment three times with his suitcase, setting off a bit of suspicion that he weaves into a small conspiracy with the death and dismemberment of Mrs. Thorwald at its center.

Now, a comment about tension. I remember, probably in college (I took a class on Hitchcock and Chaplin from Steven Prince one semester), a discussion of how Hitchcock created tension. It wasn’t just through editing, but through the piecemeal dissemination of information to the audience. The clip used to demonstrate it was the climax of Saboteur where Fry’s jacket sleeve begins to detach from the rest. Neither of the characters (Fry or Barry) know of what’s happening with the sleeve, but the audience does. That disconnect, which is really balancing on the edge of a knife because if you go too far with it the characters end up looking stupid rather than innocently oblivious making the section of film frustrating rather than tense, is the source of tension as we wait for the characters to catch up to what we know. Bringing this back to Rear Window, there’s a key piece of information that Jeff misses but we see. That night, Jeff falls asleep at one point and we watch as Thorwald leaves the apartment with a woman, though we can’t make out who she is specifically. It’s interesting to me that I can end up completely forgetting that I saw that after a while (and several viewings) and fall completely into Jeff’s theories, but when I do remember it, the overall tension builds. We know something he doesn’t. There’s no way he could know, but, at the same time, we’re not really sure what it means.

So, the mystery isn’t just what Jeff sees and tries to convince his war buddy and current police detective friend Doyle of, but it’s also about that little bit more of information that Jeff doesn’t.

Jeff, so convinced of his theory, gets his nurse and Lisa in on the action when Doyle dismisses them. Lisa, in an effort to prove to Jeff that she’s more than just a fashion model who can’t go outside for dangerous things, decides to sneak into Thorwald’s apartment to try and find Mrs. Thorwald’s jewelry that they had observed Mr. Thorwald discussing over the phone. Mrs. Thorwald’s wedding ring apart from Mrs. Thorwald seems like great proof that Mrs. Thorwald isn’t off in the country but more likely dead, cut up into pieces and distributed in the East River. The way the individual pieces of plot, from the observation of Mrs. Lonelyhearts’ potential attempt at suicide, to the observation that Mr. Thorwald is returning, and the phone call that Jeff was making to the police about first one and then the other combine together rather beautifully, ending rather perfectly as Mr. Thorwald suddenly understands what’s been happening. The final major scene, with Thorwald confronting Jeff in Jeff’s apartment is surprising in effect. Thorwald had done nothing to Jeff, and all Jeff has is supposition about Thorwald’s actions. When Thorwald pleas with Jeff to leave him alone there’s almost pity on the part of the audience towards the man.

Acting is rather wonderful all around, but it’s mostly centered on James Stewart as Jeff and Grace Kelly as Lisa. Stewart sells everything about Jeff wonderfully, but it’s Kelly’s effortless charm that makes it really obvious why Hitchcock worked with her on three movies in a row (and ended up trying to replicate for years later).

This really is one of Hitchcock’s best films. Its mechanics are hidden really well beneath wonderful, living characters, and the tension just builds from beginning to end.