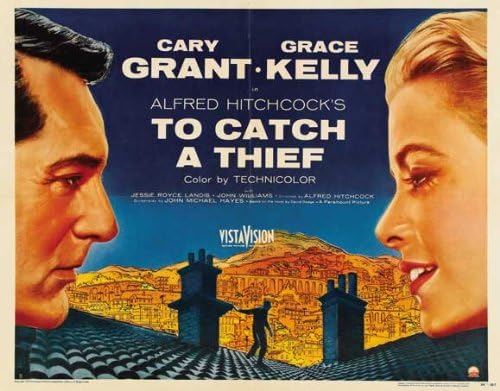 #16 in my Ranking of Alfred Hitchcock’s films.

This is such an effortlessly charming film and an obvious excuse for Hitchcock to hang out with Cary Grant and Grace Kelly in the south of France for a couple of months. It’s not challenging, but it’s intelligently built and lightly fun. It’s more about style, setting, and star power than almost any other story element, and it carries its modest goals well. It’s definitely minor Hitchcock, but that doesn’t make it any less amusing.

In and around Nice, France, a string of burglaries of high priced jewels has shocked the area and brought attention to John Robie who was known as The Cat during the Second World War when he was a cat burglar himself before he stopped it cold when he was caught and fought with the French Resistance. Knowing that no one will believe him, he makes it his mission to find the real burglar and turn whomever that is into the police.

This opening to the film, specifically how John gets away from the police, is a rather perfect microcosm of the film’s charms. We see a quick montage of the burglaries before moving to John’s expansive French villa where he meets with the police before getting them to chase him in his car. Except that he’s not in his car. He stayed behind as his housekeeper drove away, and John simply stays behind to catch the next bus into town (complete with Alfred Hitchcock cameo). So, we get a rooftop escape, a car chase, and then a comedic twist, and I think that encapsulates much of the movie’s charms.

The other major element, other than the film’s easy style and laid back storytelling is its stars. Grace Kelly proved through Dial M for Murder and, particularly, Rear Window, that she was not only a beautiful woman but one with a strong head on her shoulders who could hold her own with Hitchcock’s leading men, and To Catch a Thief is no different. Kelly plays Frances Stevens, the daughter of a nouveau riche widow who likes to carry around lots of jewels to show off her wealth, a habit that Frances does not share. John finds the pair through an insurance man out to try and protect the insurance company’s interests by preventing the jewels’ theft. So, John gets close, under a false identity, in order to try and prevent the burglary.

There’s back and forth about the jewels that do get stolen, John looking at the next potential target with Frances tagging along, and a car chase to get rid of a police escort, and it’s all handled lightly like none of it really matters. They matter only so far as they get Kelly and Grant into situations where they interact, playing off their mutual star power and being just ever so charming, and they work very well together.

The final sequence is the big stakeout to find the identity of the burglar (which isn’t that hard to figure out if you understand the economy of characters in a story). An interesting thing about it is that there’s a big deception involved, but the action around the deception doesn’t actually start until after the deception is completely finished. It makes sense from a literal point of view, and it provides the audience focus on each major element of the final sequence. There’s a literal point to it (allowing John to get on the roof without notice from the police), but the separation still feels a bit weird especially when the final part takes place on the roof and everyone who just went inside at the end of the party below come back out to see what’s going on.

Anyway, it doesn’t really matter because we get our expected ending where John clears his name and Frances falls into his arms in love because he represents the sort of excitement that she’s been looking for in a man. Again, there’s nothing challenging about this film and it has every hallmark of being an excuse to enjoy the South of France with some friends, but it’s still an easygoing and fun time.

Sure, this could have been a tighter, more inherently suspenseful picture in line with Hitchcock’s other major works, but sometimes a man needs a vacation. To Catch of Thief uses its stars very well, never takes itself very seriously, and provides almost as good a time to the audience as I’m sure the actors and director had making it.

3 thoughts on “To Catch a Thief”