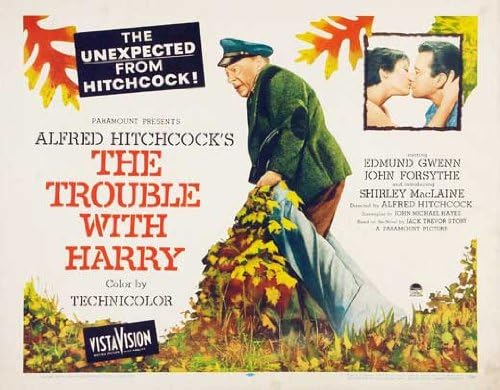 #15 in my Ranking of Alfred Hitchcock’s films.

Alfred Hitchcock decided to experiment again. This time he wanted a movie without stars (that Shirley MacClaine would later become a big movie star on her own after this, her first role, is an interesting little irony) and with a light but rather darkly humorous feel. It’s interesting to note that this came out the same year as the original The Ladykillers in England. Contemporary audiences were a bit turned off by the idea of finding humor about the burial and reburials of a dead man, but I think that time has been very good to one of only a handful of comedies that Hitchcock ever made (it’s usually noted as only his second, but these people always forget both The Farmer’s Wife and Champagne). One thing that tends to turn off modern audiences is the rather lackadaisical pace the movie takes, but I find the steady build very conducive to creating a rather wonderful bevy of characters through which all of the action flows.

Harry’s dead and he won’t go away. Captain Wiles finds the dead Harry, convinced that one of his three shots that morning found its mark in the unsuspecting Harry. As he struggled to find out what to do, several other people come by to remark about the body and take no real notice of it at the same time. The first is Miss Gravely, an older spinster of the small New England town nearby who politely greets Wiles and notes that he should get moving if he’s to bury Harry soon. The second is Jennifer Rogers and her five year old son Arnie. Jennifer is almost ecstatic at the sight of the dead body. The third is a tramp who takes Harry’s shoes. The fourth is Sam Marlowe, a local artist who takes a sketch of the dead man’s face.

And it is with this cast of characters that they decide to bury Harry, first convinced of Captain Wiles’ accidental guilt before they dig him back up, rebury him, dig him up again, and then clean up the body and his clothes to set him out for the next day when Arnie will rediscover the body and, using his twisted sense of time, tell everyone that he found the body today, which really means yesterday to him.

The dark humor of the situation underlies every interaction as people who have lived close to each other interact for the first time in any meaningful sense because three of the four (Captain Wiles, Miss Gravely, and Jennifer) all end up thinking that they killed Harry. Captain Wiles is an old sea captain who found this small corner of New England just three years before, clinging to the articles he had collected over his career in his small out of the way hut. Miss Gravely is a spinster that doesn’t realize how much she looks like one but happily takes the advice of Sam Marlowe as he cuts her hair. Jennifer tells of how Harry married her after Harry’s brother and Jennifer’s former fiancé died, only to disappear on their wedding night at the insistence of his horoscope.

It’s hard to talk about the charms of this movie, because it’s really all about the feeling of it. The notion that these sweet interactions between Captain Wiles and Miss Gravely as they develop a romance and the similar relationship that develops between Sam and Jennifer are all happening while people try to figure out who was responsible for the death of a man on the outskirts of town ends up being really endearing. A lot of that is carried by the performances, especially Edmund Gwenn with whom Hitchcock had worked several times before. As Captain Wiles, Gwenn is disarmingly sweet as he figures out how to deal with his situation and then courts Miss Gravely, but it’s John Forsythe as Sam who’s really at the center of the film. His slightly detached air provides the audience with our vehicle into the little world of the film, and his sardonic tone is a pleasing voice through which to follow. Shirley MacClaine in quite literally her first film role, is also sweet and innocent as the jilted wife with little concern for her dead husband as she steadily falls for the masculine Sam.

The plot is bare because it is there as an excuse for these four characters to interact and grow together. It moves at its own steady pace, happy to let scenes play out for their own sake rather than to get on to the next scene about either digging up or burying the body. The dark aspect of the material provides an off kilter feeling to everything that really only enhances the sweet nature of the characters’ growth. There’s also something about the overall feel of character interactions that makes this feel like it could have been set in the English countryside rather than New England. The way characters are just so polite to each other reminds me of one of Hitchcock’s last British picture, Young and Innocent.

While I can understand why many modern audiences wouldn’t share my enthusiasm for The Trouble with Harry considering its slow pace and gentle sense of humor, I find the combination rather infectious. It’s a delightful movie that straddles a combination of tones rather deftly. The Trouble with Harry has gotten a re-evaluation over the years, and I think it’s richly deserved.

3 thoughts on “The Trouble with Harry”