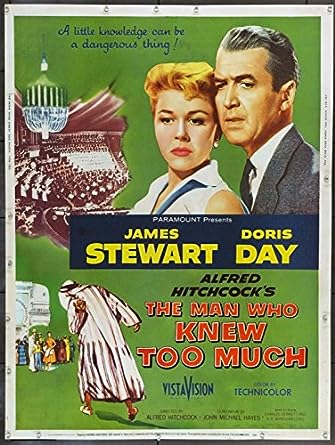 #27 in my Ranking of Alfred Hitchcock’s films.

I’ve always wondered why Hitchcock decided to remake his 1934 film, and five minutes of digging gave me two answers. The first was that Hitchcock needed a film to complete his contract with Paramount Pictures (similar to how he completed his contract with Selznick with The Paradine Case), and the second was that he felt that he could do better than he had done the first time. For sure, the second bite at this apple is slicker in terms of its production with better performances from its leads, but it seems like a lesser entertainment overall. It’s still a solid thriller, for sure, but there’s something a bit less exciting about it the second time around.

This really is an interesting example of how to do a remake. The usual things that people talk about as changes are the dentist office scene being missing and the end shootout getting replaced with the scene at the embassy. However, especially regarding the change in the shootout, these are largely because of other more important changes. The first major change is the new setting of the opening of the film. Instead of snowy Switzerland, where the main characters are there for the wife to partake in a shooting competition, we start in Morocco where the main characters are simply on vacation after Dr. Benjamin McKenna attended a medical convention in Paris. Along with his wife, Jo, and their son, Hank, they are on a bus from Casablanca to Marrakech and meet Louis Bernard, the mysterious and charming man destined to die at the end of the first act.

The change of setting allows for a more mysterious setup as the characters are in a completely alien landscape to them where they have to rely on strangers to help them get around. So, they end up with two strangers to chose from, Louis Bernard and the Draytons, an English couple also on vacation. Louis Bernard rubs Jo the wrong way. He asks too many questions and reveals too little about himself while the Draytons are cheerful and open, offering up details of their own life and even looking after Hank for a while, Mrs. Drayton giving him motherly attention.

This being a late Hitchcock movie, though, there are red herrings and double crosses to be had. Louis Bernard was the good guy! The Draytons are nefarious indeed!

And this is where, I think, the movie does do a markedly better job than the original. Jo’s anguish, wonderfully conveyed by Doris Day, is palpable as she wrestles with her guilt at losing Hank. James Stewart as Dr. McKenna is just as good and broken up at the thought of losing his son, and they’re both a good deal better than Leslie Banks and Edna Best in the original. If the film were more of a straight drama about two parent who lost their child, I think this could have been the superior version, but it’s still a thriller and it’s the thriller elements that I think don’t work quite as well.

The action moves to London as the McKennas look for their boy who was taken by the British Draytons, and the movie ends up kind of slowing down. There are new characters to introduce from Scotland Yard and the good doctor ends up looking for the wrong man based on the scrap of information that Louis Bernard told him as he died. He shows up to a taxidermist with the same name, and there’s nothing wrong with the scene. It’s a tense little moment as it is, but it ultimately leads nowhere as Jo figures out on her own that the name isn’t of a man but of a church.

The Albert Hall sequence, though, is a step above in this one. Purely visual storytelling with music that drowns out every other sound as Jo struggles to find a way to counter what she knows is going to happen. It doesn’t start as well, though. In the original, there was a quick moment as the shooter handed the mother a pin we had seen earlier and we see the realization of the stakes on her face. In this new version, the shooter walks up to Jo and simply tells her outright what will happen. After that, though, the sequence is great.

The final big scene of the film replaces the shootout with a trip to the embassy where Jo sings “Que Sera” in an effort to try and signal to Hank whom they assume (correctly) is being hidden inside. It’s an adaptation of the idea that the mother character in the original uses her skill (shooting) to save the child to Jo using her skill (singing) to save her son. It’s a fine scene on its own, and an interesting use of adaptation to make a scene different while accomplishing the same goals.

On its own, the 1956 version of The Man who Knew Too Much is a solid thriller, a return to a more familiar genre after several films that didn’t connect with audiences or critics as well as Hitchcock would have wanted. Perhaps a bit too long and not as well built as it could have been, it’s still a fun time anchored by a pair of very good performances with a great climactic sequence at the Albert Hall.