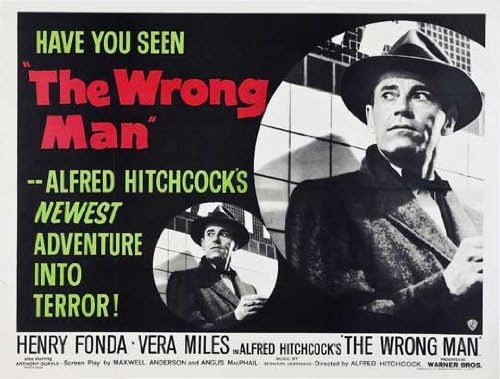 #9 in my Ranking of Alfred Hitchcock’s films.

Hitchcock does cinema verité (sort of), and he handles it really well. It’s a true tale of Manny Balestrero who was mistaken for another man who had been holding up different businesses in Jackson Heights, Queens. It’s one of several movies in a row where contemporary critics and audiences had trouble with what Hitchcock had produced largely because it didn’t conform to their preconceived notions of what a Hitchcock movie is supposed to be, and that’s a real shame. The Wrong Man is a demonstration of Hitchcock’s ability to tell stories well outside his comfort zone, and it’s one of his best movies as well.

Manny is the bass player of a band that plays in a swanky nightclub in the city. He gets paid reasonably well for the work (eighty-five dollars a week), and he has a happy homelife that’s filled with music lessons for his two boys and a string of medical bills, the most recent would be extracting all four of Rose’s, his wife’s, wisdom teeth. In an effort to get the money for the procedure, Manny takes Rose’s insurance policy down to the company’s office to see how much they can borrow off the policy. While there, a woman who was held up some time before identifies Manny as the man who did it, and so begins Manny’s life as the wrong man, accused of a crime that he did not commit.

It’s rather obvious what attracted Hitchcock to this tale of misjustice. It’s a real life version of the kind of stories he had become known for over the years, and, with that in mind, it has some interesting reversals. The first and foremost is that Manny is unable to avoid the police. He’s in their custody from the start and only out because he makes bail. His efforts to go around the police to prove his own innocence are largely ineffective and abortive when some key witnesses that could help him all end up having died in the preceding months of natural causes. The lawyer he hires (the real version happened to be a technical advisor on the film and ends up looking super principled and caring for some reason) ends up following a line of questioning of a witness in the trial that leads one of the jurymen to stand up and lash out in court, wondering if anything important is going to happen, leading to a mistrial.

Another major change is that Manny is largely passive throughout his ordeal. He gets arrested and just goes along. He does everything the police ask of him (without a lawyer present, demonstrating the fact that you should always have a lawyer present when getting questioned by police). He meekly marches into jail, desperately just hoping that someone will come up with the $7,500 bail money. He sits quietly in the courtroom as the prosecutor bends facts in ways that Manny knows to be false. Normally, such a passive main character would be a problem, but I think that Manny’s passiveness is actually part of the source of terror at the center of the film.

Manny’s reactions feel like the actions of a man with little to no connection to the law, who’s suddenly in over his head on the particulars of a system he knows of but doesn’t actually know. The feeling of realism extends far beyond the use of real people in small parts (including people who were actually part of the original case) and real locations. Manny’s inability to do more than passively participate in the justice system gone wrong feels very genuine and horrifying in equal measure. The fact that Manny only gets off because of a late coincidence is another thing that would feel wrong in a more traditional narrative but feels very right in this close to reality tale.

Running through this real-life story is the idea of chance. It was chance that Manny looked a fair bit like the man who did the robberies, and chance that he got the teller who could make the connection. It was chance that undermined his efforts to clear his name, and it was chance that ultimately led to his acquittal. The terror at the heart of The Wrong Man is that a normal man’s life can completely fall apart because of a chance encounter.

Contemporary critics were surprisingly unkind to the film, expecting Hitchcock to make another Rear Window rather than to branch out and try something different. The New York Times even went so far as to call the film frightening but not good drama. It’s an interesting take, saying that the movie was effective in what it tried to accomplish, but because it didn’t follow certain rules that the critic thought were important, he largely dismissed the film. The Wrong Man is a different film for Hitchcock, embracing certain aesthetics and narrative conventions that he hadn’t touched before while embracing a burgeoning set of cinematic techniques originating from France and Italy (as opposed to the early German influences on his visual style). It’s a great film.

3 thoughts on “The Wrong Man”