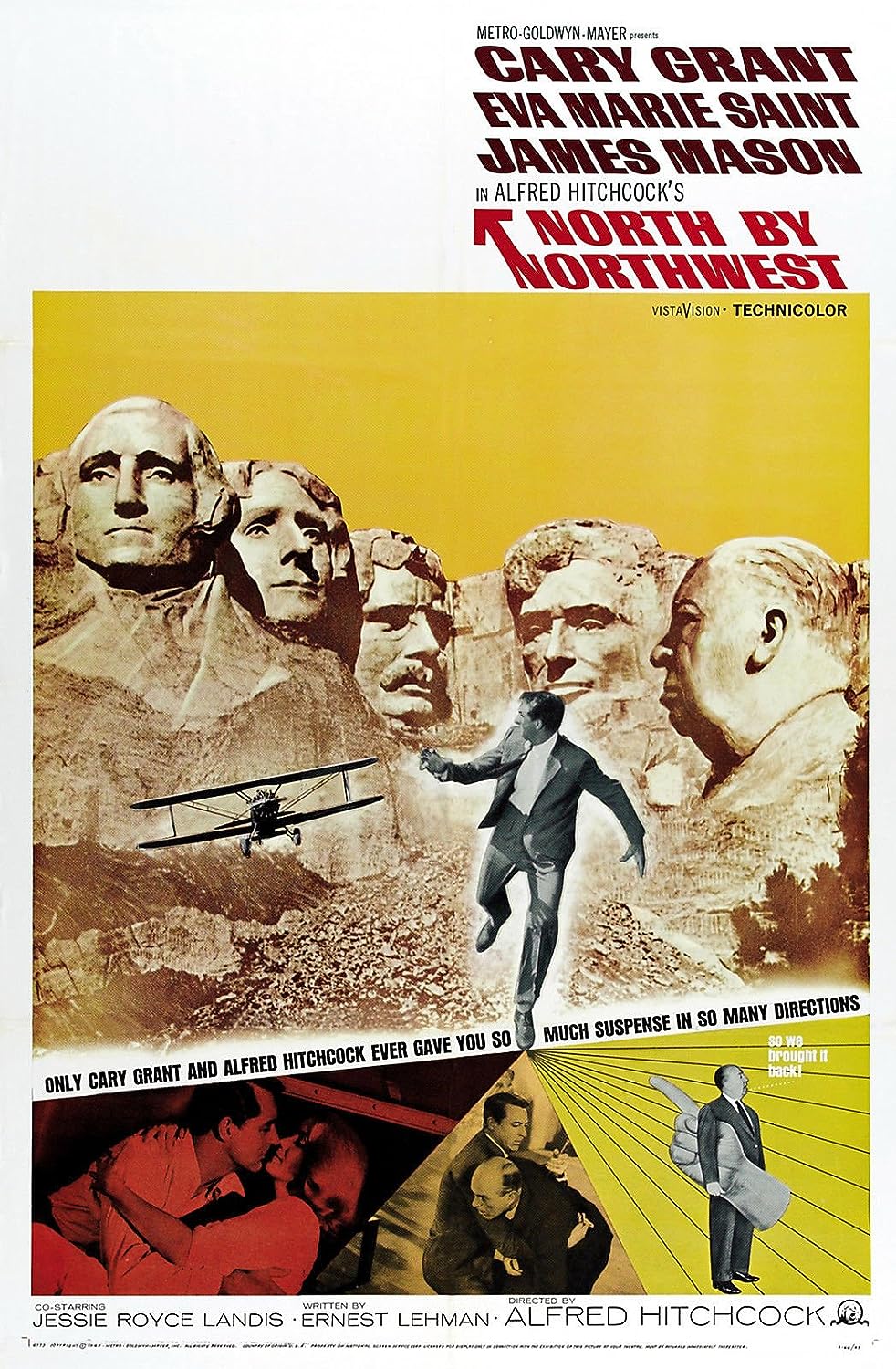 #6 in my Ranking of Alfred Hitchcock’s films.

Ernest Lehman, the writer of North by Northwest, set out to write the “ultimate Alfred Hitchcock film,” and I think he succeeded. This is probably the most Hitchcockian movie Alfred Hitchcock ever lensed, the summation of a career of obsessions and ideas into one film. It’s his Fanny and Alexander except with Cary Grant, spies, and a chase over Mount Rushmore instead of a Swedish family dealing with their issues.

Roger Thornhill is an advertising executive with two ex-wives and several bartenders dependent upon him who gets mistaken for a spy hot on the trail of a criminal, Phillip Vandamm who’s stealing, let’s say, government secrets. Like I said in my Foreign Correspondent review, the MacGuffin in this film is probably my favorite, being a vague “government secrets” that’s so far outside the point of the action of the film as to be pretty much meaningless. The meaninglessness of the central plot device though allows the audience to focus far more on Thornhill himself along with Eve Kendall, an employee of Vandamm’s who may have more to her than meets the eye.

What sets this adventure apart from Hitchcock’s previous outing with Cary Grant, To Catch a Thief, is that Grant has more than just his own charm to run the show. There’s an actual story of a man trying to clear his name and the obstacles in his way instead of the man clearing his name being an excuse to spend time on the French Riviera. The antagonist is clear from the beginning, his motives for pursuing Thornhill made clear as well. The case of mistaken identity comes up out of coincidence and drives on because of how characters see the world and those around them. Thornhill’s continued insistence that he’s not George Kaplan, government spy, just convince Vandamm all the more that he is the spy because his disavowals sound so unconvincing to a man expecting someone more attuned to the lies of the spy game than honesty.

The other third of this triangle is Eve Kendall, Vandamm’s mistress. She and Thornhill have an easy rapport, as one might expect from a pairing where half is Cary Grant in an Alfred Hitchcock film, and the attraction is palpable, but she keeps him at arm’s length. She’s playing a complicated game already as the government’s mole inside Vandamm’s organization, and the sudden appearance of the spy Vandamm’s been looking for but who keeps insisting that he’s not the spy complicates her situation. The balance that ends up playing out as Thornhill eventually takes up the mantle of Kaplan. It ends up being a rather plot heavy affair, but what makes it work is really the focus on the two characters at the core of the struggle against Vandamm.

Thornhill as the innocent wrong man who becomes part of the game, wonderfully played by Cary Grant, carries the audience through the adventure with charm and humor. His cynical handling of the situation as an effort to cover for his own bewilderment and fear is both a humorous and fun window into the action for the audience, but because Grant plays it as a cover for fear, it never disassociates from the action at hand to become fourth wall breaking material. The audience’s perception of Eve helps as well as she moves from innocent bystander to nefarious double crosser to an earnest woman both caught up in events and an eager participant on the side of the good guys. Both are sympathetic protagonists and great anchors for the audience.

And the adventure that surrounds those characters is really just all kinds of fun in big ridiculous ways. Every major set piece of this film is really famous for a reason. The crop duster scene builds so perfectly as Thornhill steps out of the bus into the middle of nowhere and we watch as the scene quietly develop. Each car is supposed to be his contact, and each car simply drives on by, all the while the plane flies around in the background, the quiet of the scene building tension as we wait for something to happen before the crop duster turns on Thornhill and starts its run.

The scene atop Mount Rushmore is great as well with clear action about where every actor is as Thornhill and Eve try to escape Vandamm’s henchmen, climbing down the faces of the presidents in an effort to find safety. It’s ridiculous, but just so well executed that it’s purely fun to watch.

The production is completely first rate with huge sets, wonderful uses of matte paintings, and a great array of locations. The music by Bernard Hermann is propulsive and energetic, helping to push along the narrative. It’s bright and colorful and the most purely fun movie Hitchcock had made since The 39 Steps.

6 thoughts on “North by Northwest”