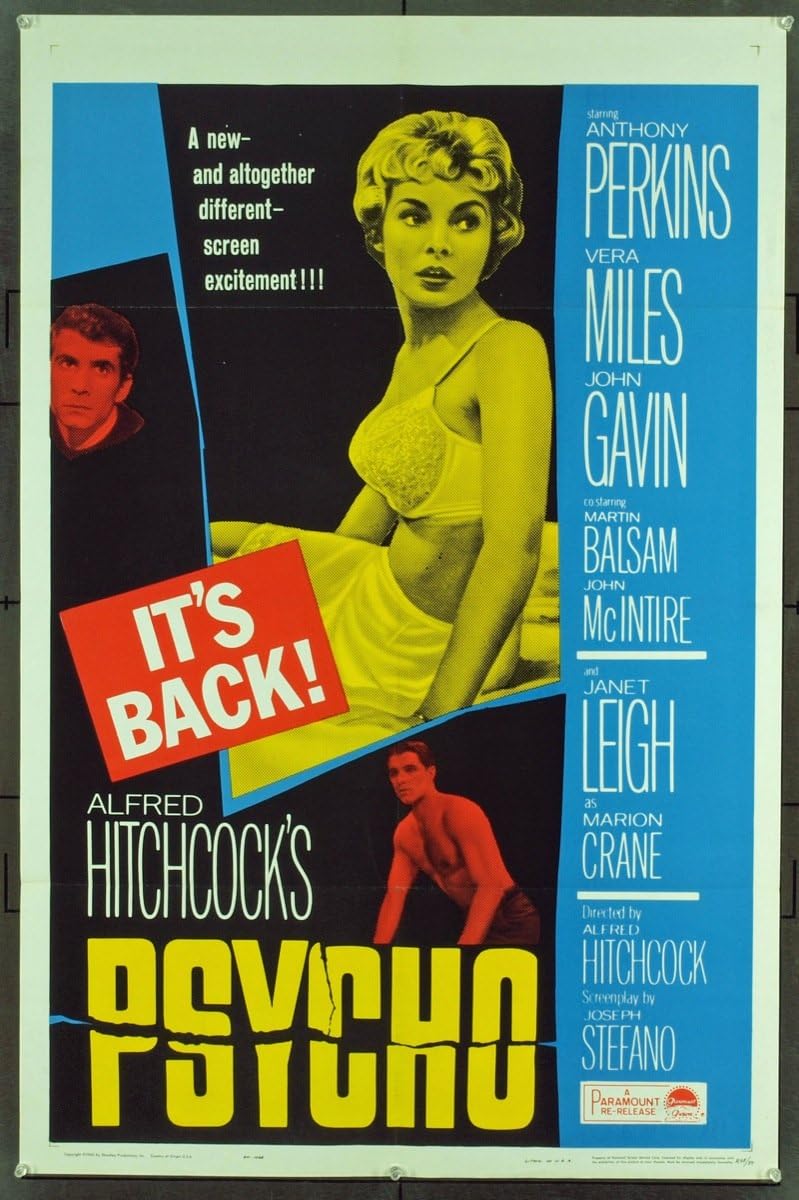 #4 in my Ranking of Alfred Hitchcock’s films.

This was one of Hitchcock’s experiment films. After the lavish productions of Vertigo and North by Northwest, and while noting the financial success of smaller and cheaper B-movies, he decided that he wanted to make a movie for less than a million dollars. He hired a lot of the crew from his television series Alfred Hitchcock Presents and largely unknown actors like Vera Miles (who had played Henry Fonda’s wife in The Wrong Man) and Anthony Perkins. Another thing he did to minimize the cost of the film was negotiate a contract with Paramount to reduce his own fee for a percentage of the ticket sales. Thinking the movie wouldn’t make much money, Paramount was happy to oblige and Hitchcock ended up making the 2016 equivalent of about $150 million.

The thing about this movie as a story is that it’s almost an endless supply of red herrings from start until over-explained ending. Janet Leigh’s character, the point of view character for the first forty-five minutes of the film, is a red herring. Norman’s mother is a red herring. The idea that Norman buried another woman in his mother’s grave is a red herring. The money is a red herring. It’s not only the audience latching onto things that ultimately don’t matter but characters as well as they circle around the problem but only come to the actual source in the movie’s final moments. On paper, it feels like a movie that would annoy me rather than entertain me. It’s just this side of lying to the audience, but Hitchcock maintains narrative discipline and integrity while playing with us so expertly that he gets away with it. It really is the best single example of what he said, “Always make the audience suffer as much as possible.”

The thing about slashers is that the genre has completely devolved to the point where the kills are the only important thing and the characters getting killed don’t really matter. They’re just meat for the grinder. Well, there are only two deaths in Psycho and both are of characters that we actually spend time getting to know. The first is obviously Janet Leigh’s Marion Crane. She doesn’t even arrive at the Bates Motel for a full half hour. Instead we get her relationship to Sam Loomis, a divorcee who pays alimony and lives in the back of a hardware store, her dreams of running away with him where money isn’t an issue, and her job situation where she suddenly gets $40,000 in cash handed to her to place in the company’s safety deposit box. Without any dialogue to explain her actions, she simply goes home, packs up her bags (changes from a white bra to a black one) and drives away from Phoenix towards California where her boyfriend lives.

She drives, desperate to avoid detection, sleeping on the side of the road in her car, exchanging her car for another in California, and, in a rainstorm, stops at the hotel where she meets the proprietor, Norman Bates. Anthony Perkins as Bates is one of the key special ingredients to this film. From his innocent introduction to the sinister ending, he’s complex and endlessly watchable. His first scene, from his greeting of Marion to wishing her goodnight after their small dinner in his parlor, is such a great moment. Despite his innocence, there’s something off about him. He’s too innocent for his age. He seems boyish instead of just nice, and then the conversation turns to his mother and a darkness comes out of him. This is the much better version of the first scene in Strangers on a Train. There, Bruno was far too aggressive too early for me to sell the ideas at play, but here, Norman Bates is such a disarming naïf for the first few minutes that his dark turn doesn’t feel like it should send Marion screaming.

Marion decides that her actions were not worthwhile and that she should go back, figuring out how much she owes from the money she used on her trip out, and then she dies. What sets Psycho apart from most modern slashers is that incredible cruelty for Marion because we, the audience, end up on her side, happy that she’s going to return back, and then she dies. We spent forty-five minutes getting to know her, watching her make a huge mistake, and then begin to turn around on that mistake before she was taken away. It’s emotional investment that’s required for us to feel the murder. If she had been on screen for five minutes before her death, there would have been no investment on the part of the audience, but we feel her death and when the investigation of her death picks up in the second major portion of the film, heading by Sam Loomis, Marion’s sister Lila, and the private investigator Arbogast, we want the investigation to move forward.

And that’s really important because of who the actual murderer is. This is where the red herrings play out really well. We’re led to believe for most of the movie that Norman’s mother is the killer as complex thoughts about Norman’s innocence and loyalty to his mother play out. He becomes an accomplice, but his devotion to his mother who’s so cruel to him is admirable at the same time. We end up kind of rooting for him, being on his side rather than Sam’s when Sam comes to question Norman. It’s so effective that as we see Norman in his final shot as his mother’s voice speaks in voiceover, we still feel for Norman, lost in the blackhole of his mind to his mother’s power over him. So, she ends up truly being the killer, but it’s still Norman at the same time.

It’s Hitchcock playing with the audience, twisting the knife into them about expectations, emotional investment, and denouements. He’s playing the audience like a fiddle, and it works so incredibly well. It’s experimental, cruel, and wildly effective. For a movie that seems to rely so much on a twist, it holds up remarkably well because Hitchcock knew that it was more than just a twist. It was a story that needed fully fleshed out characters.