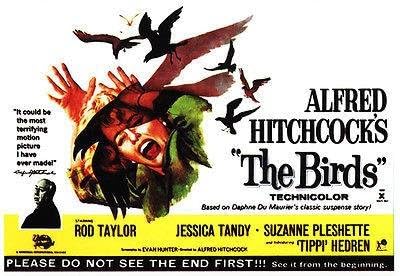 #13 in my Ranking of Alfred Hitchcock’s films.

This movie has no business working as well as it does. It’s a horror movie about birds that largely stops giving its characters room to grow at the halfway point to focus on pure survival. And yet, it’s got such a good build of tension over the course of the entire film through its final moments that it overcomes the thinness of some of what came before. It should be minor Hitchcock, but by pure force of his talent, he turns a small film into a wonderful entertainment.

Much like Psycho, the movie spends a lot of its early moments dedicated to its characters. Our two main characters are Tippi Hedren’s Melanie Daniels and Rod Taylor’s Mitch Brenner. Melanie is the daughter of a newspaper owner, a rich girl with little to do and likes to resort to pranks, including one time the summer before when she fell into a fountain in Rome (a reference to La Dolce Vita, perhaps). Mitch knows of her reputation and has some fun with her at a pet shop, getting her to act as a salesperson and she ends up over her head, not really knowing anything about the birds she’s talking about. As a way to troll him a bit, she buys a pair of lovebirds that he had said he wanted to get for his sister’s birthday and ends up driving sixty miles up the California coast from San Francisco to the small seaside community Bodega Bay. There, she meets the local schoolteacher, Annie, before lying over and over to Mitch about her purpose in Bodega Bay. She’s cynical and can’t admit to any genuine feelings, so everything’s a bit of a joke to her.

Now, one of the joys of the first half of the movie is Tippi Hedren herself. She’s sardonic and very self-assured, carrying herself with great overinflated pride that is both a bit infectious and a great setup for a great fall. She’s a great leading lady, picked out from obscurity by Hitchcock. He also put her through hell, not just the characters, but Tippi ended up in the hospital for a week because of how intense once particular late scene went for her.

The build of tension is really well handled. For the first half of the film, the overall emphasis is definitely on character, getting Melanie to Bodega Bay, introducing Mitch, his mother, and his sister, and allowing some background information about the previous relationship between Mitch and Annie come out. At the same time are small moments hear and there that build in intensity. First is the unnatural amount of noise from the birds in the pet shop in the first scene. Then there’s the seagull flying into Melanie’s head as she crosses the bay. Then there’s the gull that flies straight into Annie’s door, killing itself. The final major event of the first half is the birthday party for Mitch’s sister, Cathy. The children are all out, having a good time, when birds fly down without explanation and simply start attacking. Each event is bigger than the last until the attack.

Now, one of the things that I love about this film is that the bird attacks never get an explanation. The source material by Daphne du Maurier did provide some small explanation about the tides, but one source of terror is the unknown. Something rather benign, like birds, suddenly turning on people and becoming destructive is scary, especially if we can’t figure out why. Explanations are soothing to the human mind, being able to categorize things neatly helps make us feel better. Denying us the ability to classify a threat increases the terror of that threat to the human mind, so while having the ornithologist show up and explain bird behavior is a drag on the film, it does do one important thing. It gives us an expert on birds being without explanation for their behavior. No, birds do not act like this, she assures us while birds attack the small diner. Her terror increases our own.

Slight tangent: When, in movies, things don’t go according to nature, it’s often sloppiness on the part of the filmmakers, and I understand that. But something like Jaws, which uses the same basic template as The Birds with a more naturally terrifying animal at its center, does it on purpose and yet it still gets complaints that great white sharks don’t act like that. Well, this one does, and that’s what’s important to the story.

Anyway, the movie really shifts focus in its second half to the increasing terror. The only real character work that happens is the humiliation of Melanie until she becomes an emotional wreck by the end, her cynicism replaced by abject terror at the mere sight of birds.

There are some absolutely fantastic visuals in the latter half of the film as innocent images suddenly get invaded by threats. Melanie sits on a bench outside the small community’s school in front of its playground equipment. As she lights up a cigarette, without any fanfare, a crow flies in and lands on the equipment behind her. The innocent moment has been completely undermined by that single bird showing up. It’s a great moment.

Another great thing about the film is that there’s no musical score whatsoever. One thing that can really help elevate tension is quiet, as the audience sits in wait for something to happen. When the entire movie built on raising tension from the first frame to the last is done without music, the technique provides space for audience expectations that something is going to happen at some point, and it never lets up. The only real soundtrack is the use of bird sounds, some electronically generated, and it’s really effective.

As I said, The Birds is far better than it really deserves to be. It thins as it goes along, but tension becomes the overriding factor and just dominates every moment. It’s a fun, tense movie that leaves you with a sense of dread at its ending.

9 thoughts on “The Birds”