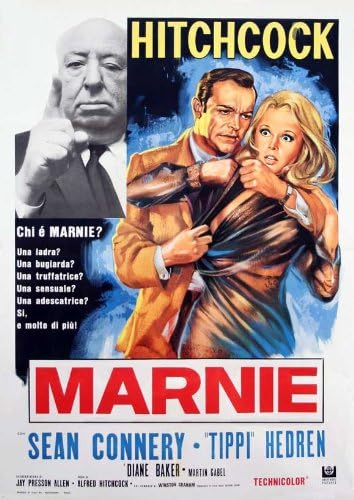 #37 in my Ranking of Alfred Hitchcock’s films.

It’s a near miss, I think, a story that mostly gets it right until the end when things both go off the rails a bit and become simply too pat for comfort. Hitchcock’s long history and deep knowledge of production makes it a slick affair on par with anything he had made since the early fifties, but this is an example of where the material didn’t quite feel right for his set tendencies, reminding me a bit in effect of I Confess.

It’s about a woman, Marnie, who makes her living by ripping off her employers one at a time. She enters into a new job with little to no references, spends time to figure out how to get into the local safe, and then pulls what cash she can before disappearing. She makes the mistake of going to the client of the previous company she ripped off for a job and gets recognized by the owner, Mark Rutland. He plays with her a while until she goes through with her scheme when he quickly tracks her down and traps her.

The most interesting part of the entire movie is the central relationship between Mark and Marnie, which is a good thing since it’s the center of the entire movie. It’s a bit on the nose the way it gets laid out in the beginning (he’s got an interest in zoology and she’s like a while animal), but it works. After he traps her, so to speak, in a marriage that she can’t escape because he’d loose her to the wolves whom she had stolen from if she doesn’t comply. They go on a long honeymoon cruise where he ends up raping her in their cabin after a fight, their only physical contact because Marnie has an innate hatred of men. The discovery of why she has this is what drives the second half of the film, and it ends up going from interesting to just too easy.

It seems obvious that Hitchcock had a certain fascination with Freud. Together with Spellbound, Marnie represents the most obvious examples of Hitchcock trying bring Freud’s methods to cinematic form, and neither ends up terribly compelling once Freud takes over. You see, Marnie’s problems are all entirely emanating from a single event in her childhood that she cannot remember. Her mother was a prostitute who would shove Marnie into another room when a gentleman caller came to visit. He got a little rough, and Marnie took a fireplace poker to the guy’s head, killing him, the crime for which Marnie’s mother took the blame. It all ends up being simply too easy. It explains everything about Marnie’s character from her aversion to the color red (which is a bit more inconsistent than it should be) to her aversion to men. Even the reveal of it has Marnie resorting to a baby voice to let out the truth, and it all feels so artificial. Everything about this one character, this woman who’s led a life for at least two decades, can be boiled down to a single event and just discovering the hidden secrets of that event are supposed to cure her of her hatred of the opposite sex and her aversion to the color red.

There’s another moment late in the film that feels all wrong. Mark knows that Marnie is going to try to abscond with the money from the Rutland family safe, so he watches as she opens it and has a mighty struggle session with herself about whether to take the money or not. It’s almost cartoonish in effect as she reaches her arm out, it shakes wildly, she uses her other arm to both push it forward and pull it back. It’s supposed to be a physical manifestation of the fight going on within herself, but it’s so over the top that it ceases to have its intended effect and becomes a distraction.

And all of these problems I have are at the tail end of the film. Up to that point, it was largely successful as a straight drama. Tippi Hedren is not as spunky as she was in The Birds, but her character is different. She’s more sedate and colder, but that also makes Hedren less compelling to watch. Sean Connery is better as Mark, studying Marnie and giving into his own diametrically opposite animal instincts at the same time. They end up working well together, navigating Marnie’s troubling mental state up until the final twenty minutes or so when the movie gives up any pretense of character complexity in favor of an easy solution.

Marnie was almost a late career success, but it just decided to take the easy way out, giving its central character too pat an ending. Still, it’s handsome and well-acted, so it’s far from a total loss.