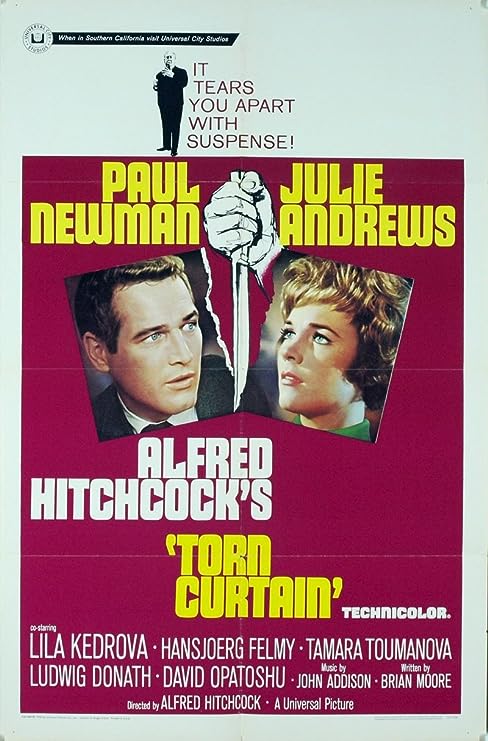 #28 in my Ranking of Alfred Hitchcock’s films.

I apparently did not like this film the first time I saw it years ago. Revisiting it now, I was a bit surprised that I liked it as much as I did. It’s a perfectly serviceable spy thriller with a good pair of performances at its center and several quality sequences. It’s a minor work, for sure, filled with nothing particularly new for the master of suspense, but it’s still an entertaining couple of hours in international espionage.

Professor Michael Armstrong is traveling to Copenhagen for a conference, but something’s wrong from the get go. We get introduced to him in bed with his assistant, Sarah, and it’s obvious that he doesn’t want her there. He’s not being honest with her about something on this trip, and he’s simply not going to reveal it to her. In Copenhagen, he tells her he’s going to Stockholm but actually buys a plane ticket to East Berlin. Angry and curious, Sarah follows him to East Germany to discover that he’s defecting to the Soviet Bloc. Frustrated and angry with his lack of patriotism because the American government failed to fund his further research into his particular rocket design, she yet still decides to stay by her man and defect along with him.

Up to this point in the film it’s been a solid piece of character based storytelling, mostly through Sarah’s eyes as we discover with her what’s going on. Paul Newman, who might have been a pain to Hitchcock but I think comes off rather well in the end product, feels appropriately untrustworthy which, when mixed with his boyishly young face, feels rather appropriate to the part. Julia Andrews as Sarah is wide-eyed innocent and then emotionally compromised as she watches her fiancé turn his back on his country, and she does it quite well.

But, here’s where I think the fun begins. You see, Michael isn’t actually defecting, he’s pretending to defect so he can get close to a certain East German scientist who cracked an important part of the science, according to a published paper, and the US can’t send in any spy to extract that information. It has to be a scientist in the same field who will know what he’s looking for, how to get it, and to ensure that it’s the right information. Being in East Germany, though, the Stasi don’t trust him implicitly, so when Michael goes to a farm to meet with a spy already embedded in the country, Gromek, a Stasi agent, follows and discovers Michael’s secret. The scene of Michael the little German woman in the farmhouse inexpertly murdering Gromek with a variety of methods is a standout moment. Designed to show how hard it can be to kill a man, the action enters black comedy as the effort gets dragged out and knives get broken off in Gromek’s body without killing him, chokeholds don’t immediately knock him out, and they have to resort to killing him with gas from a stove.

That murder forms the basis of the tension that follows through the next major section of the film. Knowing that Gromek will be discovered at some point, Michael has to work quickly to ingratiate himself with the East German scientist, Professor Lindt, and get the formula from him. Revealing his true mission to Sarah along the way, Michael gets into a small competition with Lindt, comparing solutions. The scene is great as Michael eggs Lindt into revealing what he knows, having to slowly reveal that Michael doesn’t actually know any solution, all while a small commotion begins to build in the background. We know that Michael doesn’t have the solution, and the scene hinges on him being able to convince Lindt that he does have something. It’s a surprisingly effective bit of tension as the MacGuffin gets brought out, and the moment when Michael sees the formula and ignores everything else to memorize what he sees while Lindt starts calling for help sells the importance of everything really well.

The action moves to getting Michael and Sarah out of East Germany, and the movie ends up losing a bit as they get onto a bus to head towards the coast and we get an extended chase that does some basic tension building but also feels unusually cartoonish in terms of comic delivery. Actually getting them out of Germany and into Sweden involves a ballet performance, sneaking backstage, and hiding in costume boxes for hours that will get placed on a ship and sent to Scandinavia. Again, the movie has its moments along the way, and they mostly work, though I found the final bit with the unloading of cargo in Sweden to be a bit less precise than it should have been, creating more confusion than tension.

There is one scene in the final act of the film that could probably be completely extracted from the film, but it still works so wonderfully well and helps feed into Michael’s emotional journey really well that I would never want it cut. Michael and Sarah are on the run from the East German police and come upon a kindly old woman who begs them to sponsor her for citizenship to America in exchange for her helping them. Lila Kedrova plays the part of the Polish countess so heartbreakingly that as we watch Michael and Sarah go from complete distrust at the sight of someone who knows they’re American because of the spy game they’ve been playing for the past several days to understanding, we end up rooting for the countess to get what she bargained for. That the movie ends up forgetting about her after she’s left the scene is a disservice to her.

It’s not great Hitchcock, but it’s got some great stuff in it. The murder in the farmhouse, the reveal of the MacGuffin, and the Polish countess are all worth the price of admission. Thinking back again to my initial distaste for the movie years ago, I think the problem is that the movie does move kind of slowly, especially in the first half. Watching Torn Curtain again years later, I don’t have a problem with that anymore, and I find it to be a quality spy adventure, well-anchored by good performances from Newman and Andrews, and with some standout individual moments. It may not be a classic, but it’s worth the time.